The indictment accuses the five-term Republican congressman and his wife of using more than $250,000 in Hunter’s campaign funds on personal expenses, such as family vacations, school tuition, fast food and video games.

The 47-page indictment describes the Alpine couple’s personal financial struggles and their use of campaign funds to pay off debts. It states that the Hunters’ joint bank account was overdrawn more than 1,100 times in a seven-year period, resulting in more than $37,000 in fees. They frequently maxed out their credit cards with five-figure balances, resulting in more than $24,000 in interest and fees.

Hunter’s personal bank account reported less than $1,000 in assets from 2009 to 2016, according to the indictment.

Hunter, who is running for re-election in November, has also been spending more than expected out of the bank account of his re-election campaign, according to financial reports filed with the Federal Election Commission. His campaign has spent $1.2 million since the start of last year, while only raising $854,000. 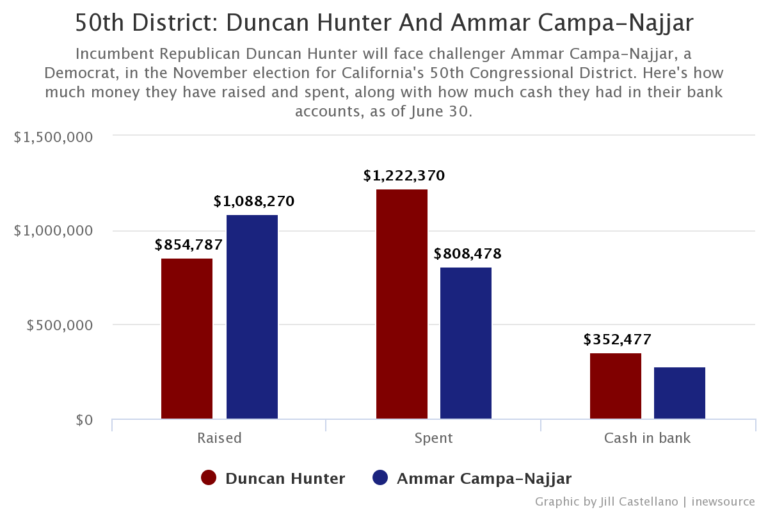 “Typically incumbents have pretty good fundraising prowess, particularly incumbents like Representative Hunter who are in safe districts where the registration numbers favor them,” Levinson said. “And so typically you don’t have a campaign deficit at this point in the election.”

The San Diego Union-Tribune reported in April 2016 that the FEC began investigating Hunter over the use of his campaign funds to pay for video games on 68 occasions. Two months later, according to the indictment, the FBI started investigating Hunter and his wife, Margaret.

They face five charges, including conspiracy to commit offenses against the United States, prohibited use of campaign contributions, wire fraud, falsifying records, and aiding and abetting.

“The goal of the conspiracy was for Duncan Hunter and Margaret Hunter to enrich themselves and others at their direction,” the indictment reads, “by converting Campaign funds for their own personal benefit and enjoyment, and for the personal benefit of others with whom the Hunters has personal relationships.”

California’s 50th Congressional District is one of the most Republican-leaning in the state. Of registered voters, 42 percent are Republicans and 27 percent Democrats. The region covers most of eastern San Diego County and part of Riverside County, including Temecula.

After the indictment was unsealed on Tuesday, the nonpartisan Cook Political Report changed the race from a “solid Republican” victory to “lean Republican.”

“He’s still the odds-on favorite, but it’s opened up a significant opportunity for Ammar Campa-Najjar, who now has the attention of the national media,” said UC San Diego political science professor Thad Kousser. “This is also his chance to get donors excited, because he needs the money to get his story out.”

The joint committee is also using up its resources. When Hunter was running for Congress in 2016, the account had a surplus of $26,000. But as of June 30 this year, it reported having nothing in the bank.

Hunter’s Leadership PAC, called Peace Through Strength, has brought in almost $44,000 this election cycle and spent about $26,000. The committee has transferred $10,000 into Hunter’s re-election campaign bank account.

“For the majority of voters, sometime around Halloween is when they’re really going to start paying attention to political ads,” Levinson said, “and so you do not want to be draining your bank accounts in August before Labor Day.”

Hunter, the second member of Congress to endorse Donald Trump for president, denied the allegations against him in an interview with 10News on Tuesday.

Hunter and his wife are scheduled to make their initial appearance in federal court on Thursday morning.