Times of San Diego is an independent, online news site covering the fifth most populous county in the United States.

San Diego County is a study in size and contrast. It is home to as many people as Iowa and as large in area as Connecticut. A one-hour drive will take you from the ocean through mountains to the desert.

It is one of the leading producers of agricultural products — first nationally in avocados — but also the world center for unmanned aircraft and cell phone technology.

The military complex that includes naval facilities around the bay and Marine installations at Miramar and Camp Pendleton is the largest military concentration on earth.

Just south of San Diego is Tijuana, a community almost as large and connected through the world’s busiest border crossing. 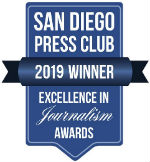 Times of San Diego’s focus is timely, comprehensive news about this unique county. We cover politics and crime, business and sports, education and arts, military and science, life and opinion.

We strive to be timely, transparent and complete. Working with partners like City News Service, contributing writers, and the experienced editors on our staff, we promise to be a news source you can depend on.

Times of San Diego and its staff have been consistently recognized by the San Diego Press Club for excellence in journalism. Our contributing editors picked up 23 awards at the club’s annual meeting in October 2019, and the site itself was named the best local news website for the fourth year in a row.

In May 2016, the website was recognized as the Small Business of the Year in California’s 39th state Senate district by former Sen. Marty Block. “The Times offers its readers online, outstanding comprehensive news,” Block said in conferring the honor

The company is also a proud member of the San Diego Regional Chamber of Commerce.

In April 2017, Times of San Diego was added to Feedspot‘s list of the top 100 news website in the United States. The popular RSS reader allows readers to easily follow multiple websites. 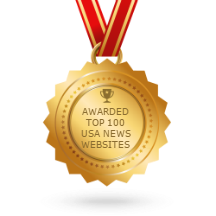 We work out of Downtown Works, a home for tech startups and other innovation economy businesses located at India and West B Streets in downtown San Diego.

If you have news tips, article submissions, suggestions, or complaints, please do not hesitate to contact the editors or simply news@timesofsandiego.com.

We are supported by local and national advertising, and by your voluntary contributions.  You can become a supporter by contributing a small amount monthly via our support page.

About was last modified: November 14th, 2019 by Chris Jennewein