Four weeks after San Diego County schools ramped up free food distribution during the coronavirus pandemic, some districts report they’re still falling short of reaching all children who relied on the meals when classes were in session.

“There are some families that are not accessing the lunch, and we’re in the process now of finding out why,” said David Miyashiro, superintendent at Cajon Valley Union School District in El Cajon.

Sixty-eight percent of Cajon Valley’s students come from households with incomes low enough to qualify them for free and low-cost school meals. Before COVID-19, the 17,000-student district served more than 13,000 meals a day. Since schools closed, it’s now averaging about 8,000, Miyashiro said.

He said that’s not good enough. It means some kids are going hungry.

“Our goal is to reach the number that we were serving before the closure,” he said.

The county Office of Education has collected meal data from only nine of the 42 local districts through a voluntary effort, so it’s not known how many are serving fewer meals to needy children. Roughly half of the county’s more than 500,000 students qualify for free and reduced-cost school meals.

Some of the region’s poorest districts, like Cajon Valley, have reported lower numbers.

National School District, which has kindergarten through sixth grade students, has served more than 11,000 meals since schools closed in mid-March — a number its superintendent told inewsource would typically exceed 40,000. Almost 78% of its 5,500 students qualify for free and low-cost meals.

Borrego Springs Unified reported a substantial drop, going from 2,108 meals the first week of the program to 1,318 the second week. The district has fewer than 2,600 students and nearly 76% qualify for free and low-cost meals.

With schools closed and the economy on shaky ground, officials want to provide more meals and make it easy for families in need to receive them. For example, students no longer have to be eligible for the free and reduced-cost meals — districts are providing them to anyone 18 and under while schools are closed.

Vince Scimone, food service director at Grossmont Union High School District, said he’s seen the need for the free meals firsthand. On Thursday, he witnessed two parents who just lost their well-paying jobs arrive at a pickup site with tears in their eyes.

Scimone, who used to work in the restaurant industry, expects with layoffs and unemployment claims climbing that demand at meal pickup locations will increase. For some of the most vulnerable children, he said, school meals were the only ones they could rely on before the pandemic.

“Some kids come up on Monday, and they literally stand in line because they haven’t eaten since Friday,” Scimone said. “When we’re in school, we see that.”

Getting meals to needy kids

Though the novel coronavirus has shut down in-person classes across the San Diego region — and state officials have said they’re unlikely to resume this school year — districts together are still providing students with hundreds of thousands of free meals.

Roughly 150 school sites, some of which are staffed by volunteers and operate every weekday for a couple hours, have been set up since mid-March to serve food. They hand out bagged meals and hot entrees. Some districts are using drive-through lanes so families can practice safe distancing without having to exit their vehicles.

Outside organizations, including the San Diego Food Bank and Feeding San Diego, also have teamed up with schools to provide meals.

National School Superintendent Leighangela Brady said the sharp decline her district has seen in served meals isn’t surprising. Students are on campus when school is in session. In this new normal, she said, families have to travel to the distribution site to pick up the meals.

“We are assuming that our counts are fairly average in terms of percentage drop, except for Districts who do the weekly meal service on one day,” Brady said in an email. “Those districts end up serving more food, because the incentive of a larger quantity of free food at one time attracts people from all over the county.”

San Diego Unified, the county’s largest district with roughly 103,000 students, has served more than 300,000 meals since schools closed in mid-March. Nearly 59% of its students qualify for free and reduced-priced meals. The district did not provide how many meals were provided before the pandemic, but a spokeswoman said it’s working with other food providers and plans to open additional pickup locations.

The district has seen challenges, including staffing and working in kitchens while abiding by social distancing guidelines.

“San Diego Unified is committed to ensuring any student that may be food insecure has access to a nutritious breakfast and lunch,” spokeswoman Jamie Ries said. “We know students are in a better position to learn when they are healthy, well fed, and well rested.”

Oceanside Unified said it’s served more than 112,000 meals since school closures, though officials didn’t provide how that compares to before the pandemic. The district serves more than 19,000 students and about 57% of its students qualify for free and low-cost meals.

‘We want to meet the need’

At least one district is seeing better numbers than before. Grossmont Union is averaging 16,000 daily meals, an improvement from the 10,000 the district typically served when schools were open, food service director Scimone said.

The district serves more than 21,000 students in eighth through 12th grade. More than 57% qualify for free and reduced meals.

During the first week of closures, the district told the county Office of Education it served nearly 24,500 meals. The next week, it was 32,800.

Scimone said his staff began serving supper in addition to breakfast and lunch, helping boost the number of meals served. Not all neighboring school districts are offering meal distribution, he said, so it’s possible non-district students are coming to Grossmont sites. 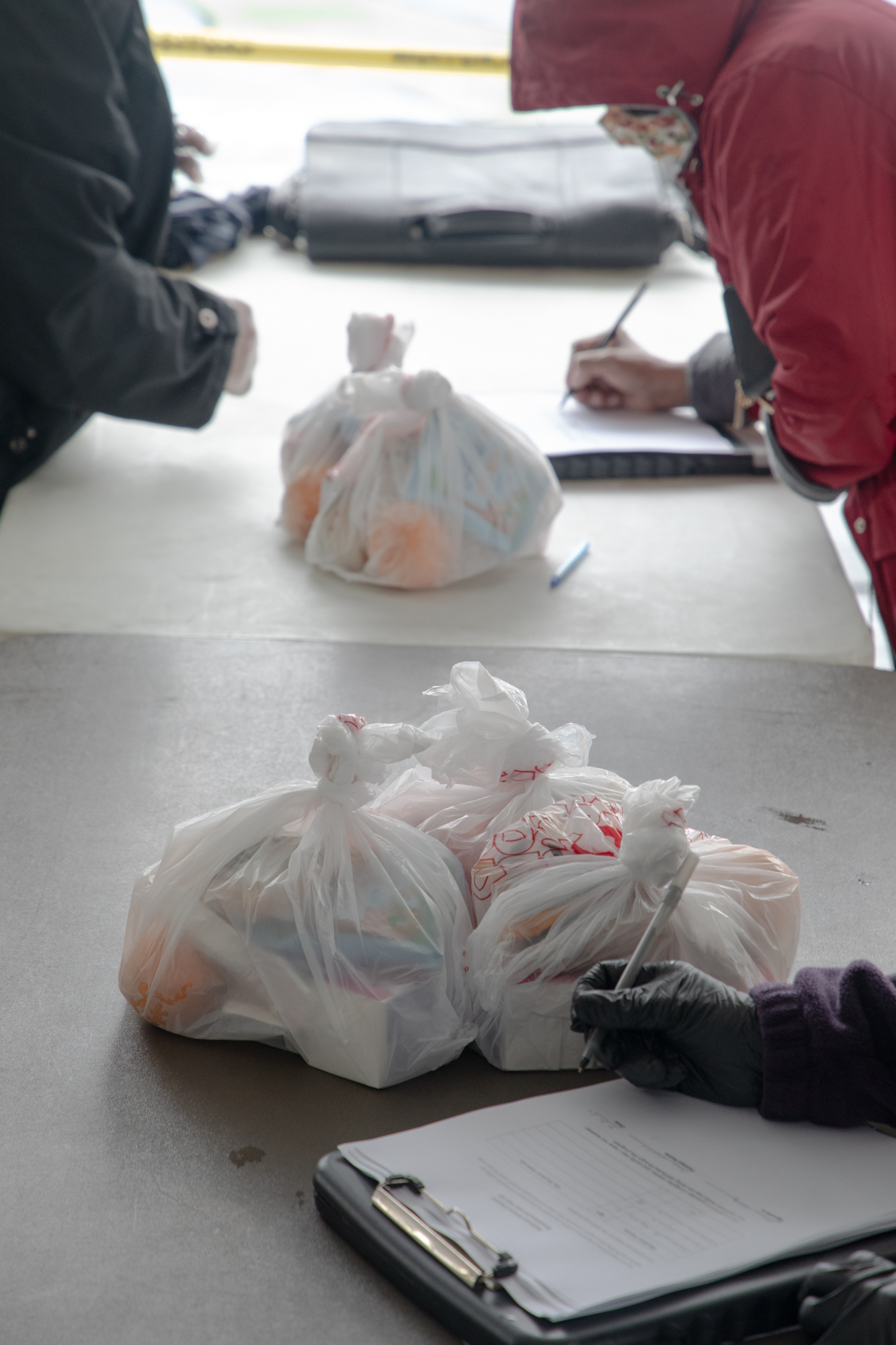 “We want to be able to help our community,” Scimone said. “When this all went down, we thought about: ‘How fast can we get this up and running?’ We feel there’s a need in our community, and we want to meet the need for people.”

One in six children in San Diego County doesn’t know where their next meal is coming from, according to the nonprofit Feeding San Diego. Thirty-six percent of children at risk of hunger are not eligible for federal nutrition programs, including free and reduced-price school meals.

Jerry Smith, food service program supervisor at the county Office of Education, said officials are looking to increase the county’s capacity to feed. He hopes more charter and private schools set up sites, and he’s confident food service will continue throughout the county.

“We’re all in concert here,” Smith said.“We realize these are special times and that we have to adapt and feed the children and the public as a whole. That’s our mission.”

He said much of the distributions are possible because of those working the sites.

“What’s happening at our child nutrition departments, they’re the real heroes here,” Smith said. “They are feeding people, and it was almost without a blink of the eye.”