More than a third of fifth-, seventh- and ninth-graders in San Diego County public schools were considered to be overweight or obese in the 2014-15 academic year, according to a report released Tuesday.

Become a supporter
The region’s first State of Childhood Obesity Report said 16.8 percent were obese and an additional 17.4 percent were simply overweight. The younger students were more prone to obesity.

For Hispanic students, 23.1 percent were obese, compared to 8.9 percent of whites. Organizers of the study, from the Childhood Obesity Initiative, said the finding was critical because Hispanics make up roughly half the county’s student population.

[contextly_sidebar id=”E9nSTyirJ0LOo2VTa5PozMocV23JHJuf”]Economic conditions also played a role. Nearly 23 percent of economically disadvantaged students were obese, compared to 10 percent of those with a better financial situation, according to the report.

Significant variances were also found among school districts. The report said 15 percent of students in the Coronado Unified School District were overweight or obese, while about half were in the National School District — in National City.

Besides Coronado, the fittest students were in affluent areas such as Del Mar, Encinitas and Rancho Santa Fe. Other locations where the overweight and obese levels approached 50 percent were Escondido, Lemon Grove, the South Bay and San Ysidro.

The prevalence of obesity was derived from state physical fitness test results. 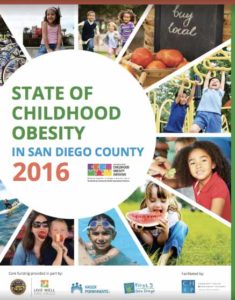 According to the report, just seven of the region’s 42 school districts have strong policy language on physical activity and physical education.

The report recommends implementing and monitoring wellness policies, providing regular opportunities for physical activity at and after school, implementing shared playground use policies with municipalities, and increasing the number of students who walk or bike to school.

“No matter how often we tell parents to have their kids eat better and be more active, if their communities where they live, work, play, learn, pray, don’t support them to be able to be active, we cannot make any progress and we won’t have any success,” said Dr. Natalie Muth, co-chair of the San Diego County Childhood Obesity Initiative Leadership Council.

The study was released at a news conference at the ninth biennial Childhood Obesity Conference, attended by more than 1,600 San Diego health experts at the Manchester Grand Hyatt.

Child Obesity Report Is Most Chilling for Hispanics was last modified: May 31st, 2017 by Ken Stone