Updated 2:50 p.m. Friday March 7, with comments from other legislators.

A state lawmaker was expected to propose legislation Friday that would ban SeaWorld from using orcas in its San Diego shows, a decision that divided other legislators.

Assemblyman Richard Bloom, D-Santa Monica, said he was being driven by allegations of animal abuse made in the disputed documentary “Blackfish,” according to U-T San Diego. 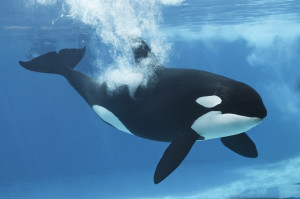 “There is no justification for the continued captive display of orcas for entertainment purposes,” Bloom said in remarks prepared for the bill’s release. “These beautiful creatures are much too large and far too intelligent to be confined in small, concrete tanks for their entire lives.”

SeaWorld executives have adamantly denied animal abuse allegations, along with accusations that they do not do enough to protect the trainers who work with killer whales, which can live up to 80 years, grow to 32 feet in length and weigh up to six tons.

“Blackfish” also explores the 2010 death of trainer at SeaWorld Orlando who was drowned by an orca. Since Dawn Brancheau’s death, trainers have not been allowed back into the water with the orcas.

Bloom’s proposal has three central objectives, according to U-T San Diego: end the use of performing orcas in theme shows, ban captive breeding and prohibit the import and export of the so-called killer whales. It does not seek to prevent SeaWorld from maintaining an orca exhibit so long as it is done in more of an aquarium-like setting.

SeaWorld spokesman Dave Koontz said the park could not comment on Bloom’s proposal because company executives had not seen it.

“I have seen firsthand the joy that animals can bring to individuals, such as my own grandchildren when they visit San Diego,” Chavez said. “I cannot support legislation that will take away from our region’s unique identity and will undoubtedly cost us jobs and tourism.”

Businesses that handle animals should continue to look for new ways to improve their quality of life, he said.

“I have not seen the bill yet, but I respect my colleague and value what SeaWorld does economically and scientifically for our region,” Atkins said. “I will carefully consider all the issues and opinions surrounding this legislation.”

Atkins is set to become the Assembly speaker, perhaps as early as this spring, which would give her some influence over the fate of Bloom’s legislation.

Assemblyman’s Bill Would Ban Shamu and All Orcas at SeaWorld San Diego was last modified: March 7th, 2014 by Ken Stone