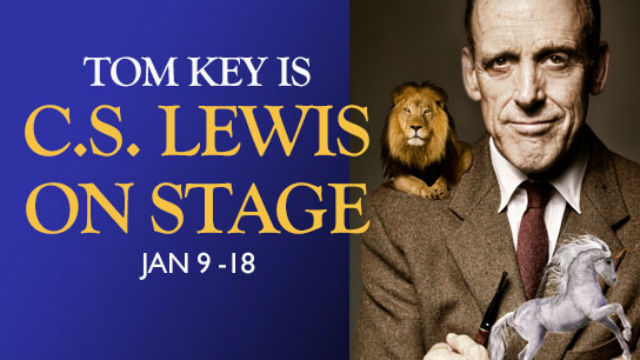 A few months before he puts in an appearance in the delightful intellectual exchange, “Freud’s Last Session,” at Lamb’s Players Theatre in April, he’s doing a brief solo performance (in the person of writer/actor Tom Key), in “C.S. Lewis Onstage.”

Key, the executive artistic director of Theatrical Outfit in Atlanta, is no stranger to Lamb’s. This is, in fact, the fourth time he’s doing this particular show here, but his connection goes further back than that. Lamb’s producing artistic director Robert Smyth has known Key for 37 years, and Key’s “Cotton Patch Gospel,” with music by Harry Chapin, has been performed at Lamb’s a number of times, both as a solo piece (by Key) and an ensemble work.

Now Key is back as Lewis, in an extended monologue he wrote for himself in 1977 (clearly to showcase his acting acument, as much as the genius of Lewis). The piece is framed as a public reading of the “The Screwtape Letters,” Lewis’ satirical, epistolary disquisition on Hell, temptation, humanity and Christian faith, written as letters from a senior Devil to a junior.

Giving us a little personal glimpse of the beloved Oxford and Cambridge professor, Lewis explains that he’s behind in his correspondence, and asks the audience if he can just finish a letter before he begins (it turns out that, the note he’s been avoiding informs a friend of the death of Lewis’ beloved late-life wife, the American writer Joy Davidman).

In another break from his protracted reading, he searches for his promised cup of tea, exploring every nook of the stage (the bare bones of the bi-level set for Lambs’ season opener, “You Can’t Take It With You”). Unable to find tea, he settles for the decanter of whiskey on the desk (said desk, plus a chair and piles of books comprise the design for this play, which is probably all Lewis would have needed).

After repeatedly disparaging his appearance, he goes on to say that his “poems were not nearly as successful as the letters from Hell.” But he recites several anyway, starting with “A Confession,” which focuses on “my limitations as a poet.” (Part of the poem takes aim at the metaphors of a more acclaimed poet, T.S. Eliot).

Alas, given the show’s dependence on lengthy segments from “Screwtape,” we learn too little about the writer himself. The tidbits we get are fascinating (like his brother, Lewis only had one joint in his thumb, which made writing literally “painful”).

His celebrated wit is in short supply, though there are sly subtleties in the writing. And when Key performs the poetry, he shamelessly declaims.

“As you can see,” Lewis tells us, “I rather prefer the ham style of acting.” Those hammy moments aren’t the best of the piece, which is, in general, a dry, intense, sometimes arcane advocacy of “mere Christianity” (stripped of political ideology), coupled with other deep thoughts from one of the great thinkers of the 20th century.

Lewis was a prolific writer. I would have enjoyed hearing some of his lighter or fantastical fare (excerpts from “The Chronicles of Narnia” or “The Space Trilogy,” for example). I also craved more of the man. Perhaps the point here is to entice the listener (if s/he isn’t already a devotee) to become a reader of Lewis, to find out more about him through his works.

Though Key gives a formidable performance (and solo shows are always a challenge, for actor and audience alike), I hankered for more humor, fancy and personal detail.