In the nearly five months since the first case of coronavirus in San Diego County, the number of cases and deaths continue to increase, though at a lower rate than elsewhere in the country.

As of Tuesday, county public health officials had reported 28,005 cases and 547 deaths.

Here’s a detailed summary of how the pandemic is affecting our county based on the reports updated daily by the Health and Human Services Agency.

20-Somethings Are Now at the Epicenter

When the virus first appeared, it affected primarily the elderly. Now people aged 20 to 29 are at the epicenter, accounting for over 25.4% of cases.

So the vast majority of cases — 72.8% — involve San Diegans in the prime working years, not the elderly.

“Some young people think they’re invincible and won’t get sick, but that’s not the case,” said Dr. Wilma Wooten, the county’s public health officer, at a press briefing earlier this month. “Not only are they getting sick, but they are also ending up at emergency rooms and needing hospitalization.”

The Fatality Rate Is Falling But Still High

At the beginning of the pandemic, close to 4% of those confirmed to have COVID-19 died from the disease. The case fatality rate has since fallen to 2.0%.

Most people who test positive for coronavirus recover at home, but 8.7% of patients have been hospitalized, and 2.2% admitted to an intensive-care unit.

Men, Latinos, Elderly Are Most at Risk

The disease has taken an outsized toll on Latinos in particular and the elderly in general.

The vast majority of victims of all ethnicities are elderly, with 86.7% of deaths involving people aged 60 or more.

And most of the victims had an underlying medical condition, such as heart disease, high blood pressure, diabetes or lung disease.

The highest case levels are in parts of the county noted for poverty and large Latino populations. The highest rate is in the Spring Valley area, with 3,346.9 cases per 100,000 people.

“The disproportionate rate of infection and deaths among Latinos, particularly in south San Diego, merits an urgent and comprehensive response,” said Nancy Maldonado, CEO of The Chicano Federation, last week. “These devastating numbers are the consequence of systemic inequities leading to disastrous outcomes for San Diego’s Latino community.”

Testing has become widely available in the county, with an average of 8,653 tests reported daily. The percentage of positive tests had fallen below 3% before businesses began to reopen, then surged during June, but has since stabilized at around 6%.

That’s less than the statewide average of 7.5%, and well under the rates in states like Arizona, Texas and Florida. 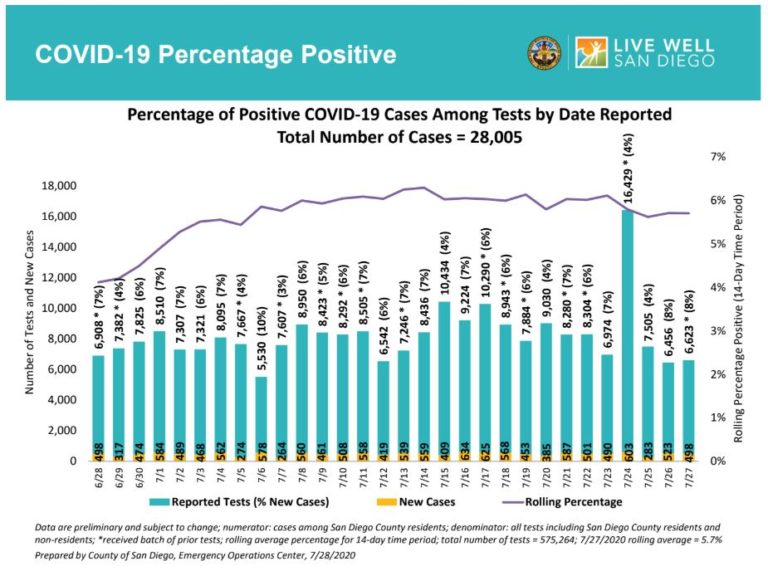 Nevertheless, San Diego County will remain on the statewide watch list that limits indoor activities until the number of new cases falls below 100 per 100,000 population over 14 days. Right now it stands at 130.1

“As a region, we continue to manage our way through this phase of our coronavirus pandemic,” said Supervisor Nathan Fletcher on Monday. “Obviously we had tremendous initial success, and then we had a little period of time where we saw a significant increase in our cases.”

“We’re now coming together collectively to try and slow the spread, to try and get our case counts down, our outbreaks down, to work our way off of the state monitoring list,” he said.