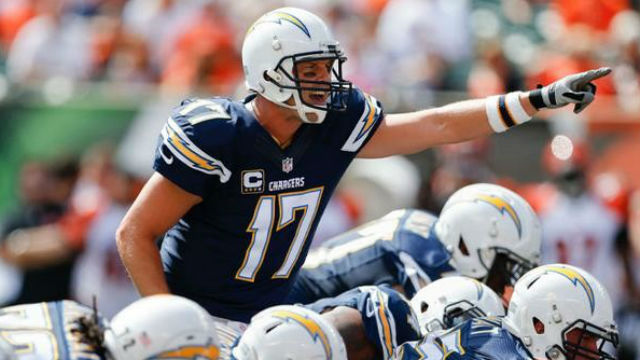 Los Angeles Chargers quarterback Philip Rivers has been medically cleared to play against the Buffalo Bills on Sunday, the team announced Friday afternoon.

Rivers has been under concussion protocol since he self-reported concussion symptoms Monday. He returned to practice on a limited basis Wednesday and fully participated in practice Thursday and Friday. He was given the all clear Friday by an independent neurologist — a requirement under the NFL’s concussion protocol.

“He looked good today,” Chargers coach Anthony Lynn said. “He looked like himself.”

Rivers has played every offensive play this season and started every Chargers regular-season game since the start of the 2006 season, 185 consecutive games. The only other player who has more consecutive starts than Rivers is Eli Manning, who has started in 208 games.

Lynn said on Monday he did not know what play Rivers was injured on during Sunday’s 20-17 overtime loss to the Jacksonville Jaguars.

Rivers was not sacked but was hit five times. He tackled Jaguars cornerback A.J. Bouye at the Chargers 2-yard line at the end of a 51-yard interception return on what turned out to be the Chargers final offensive play.

Despite Rivers having limited practices this week, Lynn said he’s not too concerned about his star quarterback.

“He’s gotten plenty of reps, so that’s not a concerned,” he said. “His health is the main concern.”

The Chargers is set to play the Bills this weekend at StubHub Center. The team is hoping to turn its fortune around after losing to the Jacksonville Jaguars last weekend.