They don’t call it the Golden State for nothing, at least not lately. California’s fiscal health is in extraordinary shape.

Income tax receipts surpassed expectations for the pivotal month of April. Projections of a $21 billion-plus surplus are not out of the question. Nearly 3 million jobs have been added since the depths of the Great Recession, yielding record low unemployment. And having already met a 10 percent rainy day fund requirement, the state is socking away billions in additional reserves to buffer against the next downturn. Impending Silicon Valley IPOs could provide an even bigger windfall.

Yet California isn’t as prepared as it may seem for the next recession—and, economists say, there will be a next one. Because voters have willingly taxed the rich, California’s $209 billion budget is more volatile than ever, overly reliant on top earners whose fortunes are tied to Wall Street.

And what’s different this time—and perhaps more worrisome—is that when the next pullback hits, California may have to fight off red ink without a historically crucial ally: Washington, D.C.

It’s not just that there’s no love lost between President Donald Trump and California leaders, or that Congress is gridlocked in its political divisions. Fiscal choices that have been made in the past couple of years may make it tough for the federal government to help states much in the next recession, even if Congress and the Trump administration want to.

“Whether it’s because of a worsening fiscal picture at the federal level or just the politics, I wouldn’t be counting on them coming to some agreement about helping out states,” said Gabriel Petek, the Legislature’s nonpartisan budget analyst.

“If you go from that premise, then the state has to be thinking about contingency planning for the next recession and getting through it on its own.”

During the economic downturn that followed the Sept. 11, 2001, terrorist attack and the financial crisis that struck in late 2008, the federal government poured billions of dollars into state coffers by enhancing support for anti-poverty programs, health care and infrastructure.

But Petek and other analysts warn that with U.S. government coffers drawn down by Trump’s tax cuts—and without an extraordinary and unifying cause like a terrorist attack or near-Depression—California and other states may not be able to count on the federal government again to backfill fiscally.

Given political priorities, casualties could easily include services that impact millions of Californians: anti-poverty programs such as CalWORKS for working parents, in-home supportive services for low-income seniors or the state’s Medicaid program known as Medi-Cal, which serves one in three residents.

“Gabe is not alone in having those thoughts,” said John Hicks, executive director of the National Association of State Budget Officers in Washington, D.C. “States did get assistance in the Great Recession and a smaller version of that in the early 2000s. That prevented them from having to make more significant cuts in education or other priority areas or have to raise revenues more.”

Petek, who was appointed in February after two decades at S&P Global Ratings, estimated the state will need $25 billion just to weather a moderate recession. That would wipe out everything the state has been able to save.

According to the Department of Finance, for instance, the state’s general fund spending on Medi-Cal alone is $22 billion, and trimming that line item in a recession would threaten the $100 billion a year in matching federal money that underpins health care for the poor in California.

“It’s a huge part of how we fund our health care system,” said Gov. Gavin Newsom’s finance director Keely Bosler. And that’s just one need among many that would soon be competing for the state’s surplus should the economy turn.

In addition to the unpredictable economy, Bosler worries about the federal support that hinges on the fate of the Affordable Care Act, which is facing a legal challenge, and the next Census, which would be dramatically impacted if California residents are spooked by a proposed citizenship question.

So as California strides toward the longest economic expansion in state history this July, Newsom and his fiscal advisors are keenly aware of what could happen. Many of them, longtime government staffers, were tasked with making cuts during the last recession and are steering the governor to limit his commitment to ongoing spending.

Bosler, who was a staff consultant in the Senate in 2010, recalls emotional, daylong committee hearings a decade ago when developmentally disabled children, working mothers and destitute patients suffering from chronic illnesses lined up, pleading with state lawmakers to spare them from cuts.

“I remember it so clearly because it was really really hard,” said Bosler, who later joined former Gov. Jerry Brown’s finance team.

On the brink of becoming a failed state, California drastically reduced spending on the poor then—with particularly long-lasting impacts on women. From cutting programs that provide child care assistance to preschool subsidies for mothers holding low-income jobs, the pullback made the dream of self sufficiency that much harder. For older women and women with disabilities, the state reduced safety-net programs intended to help them stay in their own homes by paying someone to help with housework, shopping and cooking.

In health, California slashed payments to doctors, dentists and clinics seeing patients covered by Medi-Cal, a move that discouraged providers from seeing them. The developmentally disabled were told to take generic drugs and prevented from participating in experimental treatments. And podiatry and optometry were no longer covered because they were deemed optional.

Those cuts have lasting impacts. “No program was spared,” recalled Bosler. “Significant damage was done to core state services.” Welfare advocates are still fighting today to restore medical benefits slashed during the recession.

When Newsom updates his spending plan in the mid May, he is expected to maintain his three-pronged approach for savings, paying down debt and making targeted investments in affordable housing and early education.

The second bucket would be targeted for affordable housing and to confront California’s homeless epidemic, lay the ground groundwork for extending full-day kindergarten to all Californians and provide an extra $3 billion toward districts’ teacher pension payments.

The last and largest bucket would be used to help the state weather a potential economic downturn for what Newsom has termed “budget resiliency.” He would finish paying off the state’s Wall of Debt that had accumulated from years of internal borrowing and undo a 9-year-old accounting trick that pushed the June state payroll into July so it looked like the state was spending less.

Last year, the state put $200 million toward seeding a new account intended to protect anti-poverty programs in a downturn. Newsom has embraced the safety net reserve by proposing to increase the fund to $900 million.

Senate President Pro Tem Toni Atkins, a Democrat from San Diego, told a crowd of policy advocates in Sacramento in March that even though Newsom’s style is much different from his predecessor Brown’s, their underlying strategy is similar.

“If you look at what Gov. Newsom has done in terms of the rainy day fund, paying down debt, and those kinds of issues, and if you extrapolate that, then what you see is a fairly conservative approach to resources to make sure that we are trying to keep a sustainable, resilient foundation of a budget going forward,” Atkins said. 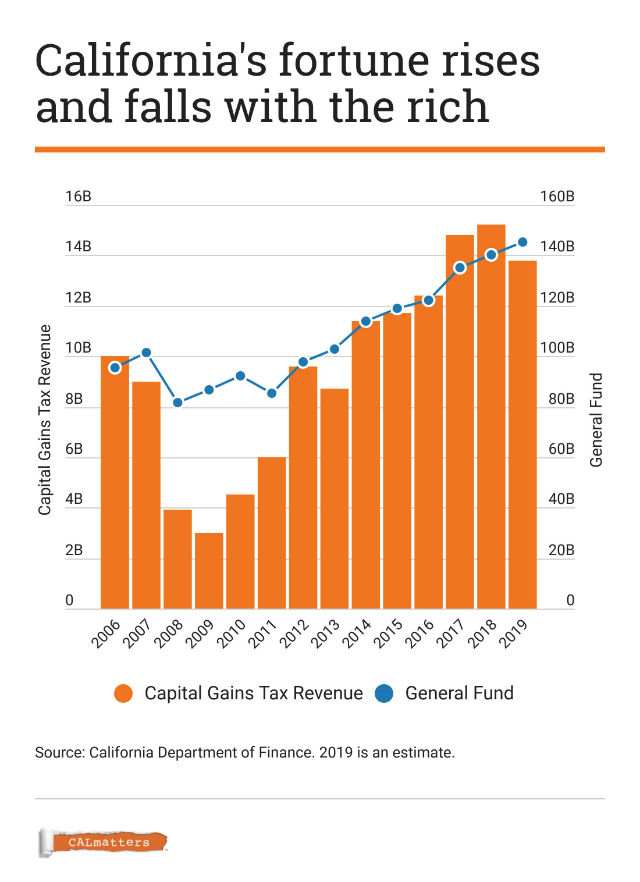 Atkins credits that extra safety net reserve to the Senate’s budget committee chair, Sen. Holly Mitchell. Both lawmakers indicated they would like to go beyond $900 million, because the money would protect just a fraction of those in need.

If the state were to set aside $900 million, it would protect roughly 435,000 Medi-Cal recipients or 132,000 CalWORKS families for a year based on the state’s average spending on those programs. Currently, about 13 million people are on Medi-Cal and nearly 400,000 families rely on CalWORKS with demand growing when people fall on hard times.

Lawmakers haven’t said how much they will try to set aside. “It’s a technical term: A whole lot of money,” Atkins quipped.

Petek, the Legislature’s budget analyst, suggests lawmakers could do even more. He notes, for example, that while paying off California’s so-called Wall of Debt sounds nice, lawmakers may not want to undo that payroll accounting trick because it’s administratively burdensome to do it again if the state needs to free up cash.

All this prevention is ironic, says Jeffrey Michael, director of the Center for Business and Policy Research at the University of Pacific in Stockton. If the state is overly reactive to economic cycles, Californians have no one to blame but themselves.

It’s voters, he notes, who have decided again and again to tax the rich, a choice that has made the system more reliant on the investment income of high earners and therefore more volatile.

And for the record, he doubts that California will have any more or less to worry about than any state should a recession hit during the Trump administration.

“While California is acting to oppose or counteract the president’s policies in many areas, I don’t believe the federal fiscal response to a downturn is an area where California needs to take special precautions against the actions of Congress or the president,” he said.

But polls show the state is generally in sync with Newsom’s mix of priorities for the current surplus. A recent survey by the Public Policy Institute of California found majorities support additional funding for working poor tax credits, wildfire preparedness and developing more housing. Only 47 percent approved of one-time spending to pay down unfunded pension liabilities.

And, like the governor, a lot of taxpayers remember the last two recessions, and remain cautious.

“If they’re not going to give [the surplus] back in a refund,” said Charles McLaughlin, a board member of the Ventura County Taxpayers Association, “then they should save it for a rainy day.”

When Next Recession Hits, Will Trump’s Washington Help California? was last modified: May 6th, 2019 by Editor