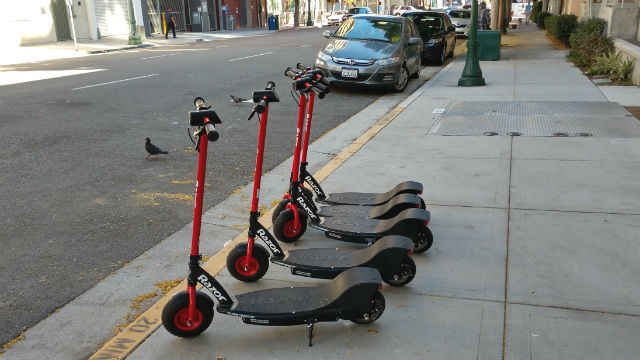 The San Diego City Council‘s Active Transportation and Infrastructure Committee unanimously voted Wednesday to send a set of regulations on dockless electric scooters and bicycles to the full council.

Should the full council vote in favor of the regulations, scooter riders would be banned from parking scooters and bicycles in hospital and school zones, beach area boardwalks, the perimeter of Petco Park and the north and south legs of the Embarcadero. Riders and scooter company employees would also only be able to park scooters in groups of four in designated areas on the street, with at least 40 feet between groups.

Scooter speeds, currently a maximum of 15 mph, would be slowed to 8 mph in high-traffic areas like Spanish Landing, Petco Park and Balboa Park, and 3 mph on the Embarcadero and the Martin Luther King Jr. Promenade. Scooter companies would use geofencing technology to limit parking abilities and speeds in specific areas, a technology that Bird already uses in areas such as the Santa Monica Beach Bike Path.

The city would also require scooter companies to apply for a six-month operational permit with a to-be-determined fee and pay $150 per scooter or bike each year. Scooter companies could only renew permits in January or June, at which time they could negotiate variables like fleet size. City officials estimate roughly 20,000 scooters are active within city limits, but companies are currently not compelled to report the size of their fleets.

City Council members Chris Ward, Chris Cate and Vivian Moreno agreed the proposal is a good start, but is likely to need fine-tuning within a year as the scooter and GPS technology changes. Because of that, the committee voted to bring the regulations back to the committee six months after their date of implementation, should the council approve them.

“I do want to see further improvement on this but I haven’t heard anything in the mayor’s proposal … that is disagreeable,” Ward said. “Everything there is somewhat of a foundation but we need more work on this for this to truly work.”

Ward and Moreno also added an amendment making it more difficult for underage residents to start and ride a dockless scooter.

“We absolutely want to make sure that these modes of transportation are available throughout the whole city and not just in the downtown area,” Moreno said. “I’ve seen a lot of underage riders operating scooters and I don’t see any provision in this ordinance that specifically requires operators to do something to stop children from illegally riding scooters.”

Representatives from scooter companies Bird, Lime, Razor and Lyft all expressed support for the regulatory package, while some residents framed the proposal as not doing enough to ensure the safety of San Diego pedestrians.

“As the creator of e-scooter sharing, we have seen first-hand how vital it is for our transportation solution to be integrated thoughtfully into a community,” said Bird spokeswoman Kyndell Gaglio. “We take the importance of protecting the safety and welfare of our riders and community very seriously and so we commend San Diego on its efforts to develop clear and impactful regulations.”

Faulconer’s proposed the current version of the regulations last week after months of pressure from residents concerned about public safety and from transportation advocates who didn’t want the scooters banned outright. The city attorney’s office is also in the process of responding to a lawsuit against the city and the scooter companies for failing to stop residents from using the scooters on the city’s sidewalks.