By Alexander Nguyen and Ken Stone

Liberty Station has been sold, according to the City of San Diego, confirming an email sent to tenants of the former Naval Training Center in Loma Portal.

On Wednesday night, email obtained by Times of San Diego told tenants that Liberty Station retail buildings had been sold and the new owner is Seligman Liberty Station LLC.

The limited liability company based in Southfield, Michigan, had been formed in September, according to California Secretary of State records. The company was incorporated in Delaware, records show.

“Because the sales went through only a few days ago, we have been unable to mail/email the December statements, as each tenant’s lease/specs need to be entered the new Owner’s system,” the email reads. 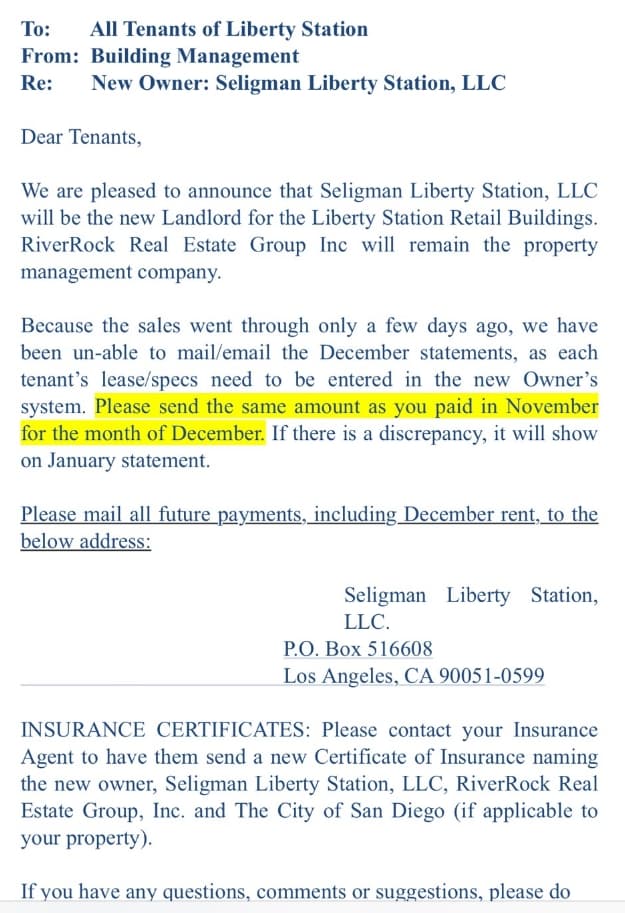 On Thursday, a spokeswoman for Mayor Kevin Faulconer’s office said the Seligman Group is a real estate investment firm partnering with Irvine-based Pendulum Partners, and “the experience of this new ownership group gives the city confidence they will be good stewards.”

Christina Chadwick, the spokeswoman, said the city’s role is to oversee terms of the so-called DDA (disposition and development agreement) and the transfer under the terms of the ground lease.

“The City was responsible for ensuring the new lease holder has a good reputation as well as the experience and financial capability necessary to fulfill the terms of the ground lease,” she said.

The email, which was sent by Liberty Station property management company, RiverRock Real Estate Group, instructed tenants to send all future rent payment, including December’s, to a post office box in Los Angeles.

The San Diego Reader, citing grant-deed records, said the deal was worth more than $71 million. But on Friday, the city’s Chadwick said the “sale price” was nearly $159 million.

The sale also raised uncertainties about the fate of North Chapel. Community members want to keep it as a place of worship, but Corky McMillin Cos. had planned to turn into a commercial venue.

In October, the city of San Diego confirmed to The San Diego Union-Tribune that McMillin had asked the city to review a plan to sell all or part of its master leasehold in Liberty Station. McMillin was awarded a contract in 2000 to redevelop the former Naval Training Center. It currently holds a 66-year lease at Liberty Station, according to the U-T.

Because Liberty Station is owned by the city, the city must sign off any lease sale or reassignment. A city spokesperson reached after hours Wednesday declined to comment because the person knowledgeable about the subject was not available.

A representative of Mayor Faulconer reached after hours said he had not heard about any sales or potential sales of Liberty Station because he wasn’t the point person on the project. Calls to McMillin and RiverRock were not returned at time of original publication.

But Thursday afternoon, Chadwick confirmed the deal and said the new leaseholder has found an operator that would facilitate religious worship to continue at North Chapel.

She released a statement from the mayor’s office:

“The mayor’s priority is to ensure that the historic North Chapel is preserved and maintained for future generations to enjoy. We’ve been in close contact with the new owner at Liberty Station and have received assurances that the North Chapel will continue to be used for a variety of purposes as allowed for under the ground lease.”

The statement said the new owner has found an experienced operator that will be seeking to book a wide range of events, “including but not limited to religious gatherings and weddings,” at the chapel after a transfer in January.

The U-T discovered that McMillin was looking to sell Liberty Station after it looked into the company’s plan to convert North Chapel into a restaurant or shopping venue. The chapel was built in 1942 as a place of worship for servicemembers and has been designed as a National Historic Place.

McMillin is supposed to maintain the building for its original use in accordance with its lease with the city, according to the U-T, but two congregations had been told that it cannot hold services there after Dec. 31.

Several community members had petitioned Rep. Scott Peters to ask the city to look into McMillin’s plan to lease to church to a commercial tenant.

In a letter obtained by Times of San Diego dated Nov. 5 to Faulconer and Councilwoman Lorie Zapf, Peters asked the two to ask the City Attorney’s Office to look into the matter. Per the city’s charter, the city attorney cannot take such requests unless asked by an elected official in the city.

Arlene Paraiso, a coordinator at St. John Bosco Mission, one of the two congregations who hold services at North Chapel, said Conrad Wear, Zapf’s staffer, told her in October he had asked City Attorney Mara Elliot to look into it but had not heard back from her office.

A spokesperson for the city attorney said no such request had been received from Zapf’s office.

On Nov. 13, the group went in front of the City Council during non-agenda public comments to ask for an investigation into McMillin’s lease. As a result of that, Councilwoman Barbara Bry on Nov. 15 asked Elliot to look into North Chapel’s lease.

The congregations had originally been told in 2017 that North Chapel was not going to be available after June 2018 but Zapf’s office was able to persuade the property management to extend the deadline to the end December, Paraiso said.

It appears a deal to sell Liberty Station had been in place as early as early October. Through her connections at CBRE, a property management company, Paraiso found out the retail side of Liberty Station and North Chapel had been sold.

“That is a violation of the terms,” Paraiso said.

She had been working for nearly a year to keep North Chapel as a place of worship. For Paraiso, the mission is a personal one. Her dad’s funeral service was held there and she held a baby to be baptized there two weeks ago as a proxy-godmother.

She believes that McMillin had no intentions of keeping North Chapel as a place of worship and had been working on a deal to turn into a commercial venue. She pointed to the website for 828 Venues, a venue developer, that listed North Chapel as one of its venues that’s opening in January 2019.

(As of Thursday, North Chapel has been taken off 828’s website.)

“That this point, knowing that it was sold, I’m hopeful that the buyers are good,” Paraiso said. “But when I see on 828 Venues, a company that’s known for gutting historic building to the studs, (the deal) is already in place — it bothers me.”

After taking a look at the company’s website, Paraiso said she saw a company that takes historic sites and completely guts them. It would sadden her to see North Chapel becoming another one of 828’s venues, she said.

“That chapel is the one last thing in the Naval Training Center that still operates as what it was when the sailors were here,” Paraiso said. “And that chapel was erected in memory of those that were lost in Pearl Harbor. There’s a lot of beauty to that.”

An updated petition by Paraiso and Save Our Heritage Organization calls on the mayor and City Council to investigate what it calls “the secret sale” of retail ground lease between McMillin and Pendulum Property Partners as well as the “secret plan” to allow 828 Venues “to gut the interior of the historic chapel after December 31, 2018.”