Throughout my campaign for San Diego City Council in 2017 and 2018, the issue I spent the most time on and repeated over and over to every audience I spoke before was the issue of our crumbling roads and infrastructure.

As my team and I went door to door throughout District 6 in Mira Mesa, Clairemont, Rancho Peñasquitos, Kearny Mesa and Sorrento Valley, we emphasized the need for San Diego to invest in our communities and aggressively rebuild and maintain our roads to serve us for the next 60 years, and to prepare for a wet winter like the one we’re experiencing.

Granted, San Diego isn’t Boston or Chicago. But because our weather is much more benign and temperate, we as a city have often fallen into the trap of not maintaining our infrastructure as aggressively as other cities that actually experience severe weather. However, our roads are as susceptible to drainage issues and poor construction as any other, and we’re now seeing the result of the short-term planning and lack of political will to meaningfully maintain our roads.

Cynical political operators may point to my concerns as shooting fish in a barrel, but this has long been an

issue for residents. And nowhere is this emergency more acute than on the east end of Gold Coast Drive, the road that prompted me to run for office in the first place. Mayor Kevin Faulconer and Councilmember Chris Cate should declare this road an emergency, and move heaven and earth to fix it immediately, before more damage is done to the cars of residents and commuters who use this critical arterial every day.

I’m aware plans are underway to rebuild Gold Coast Drive between Camino Ruiz and Black Mountain Road, in part due to my city council campaign making this long-neglected and potholed road an issue last year. One of my criticisms of Cate is that he has been in office since the end of 2014 and was certainly aware of the terrible state of Gold Coast, Parkdale, Port Royale, and other streets in Mira Mesa, and did nothing to address them other than to slurry seal neighboring streets which, frankly, were not in as severe a state of disrepair. But the slurry-sealing was window dressing, as well as an unnecessary aggravation for many residents. Worst of all, it never addressed the real problem of crumbling streets and problem roads like Gold Coast. 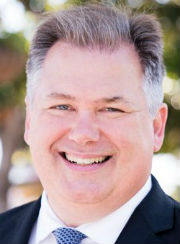 Throughout 2018 I warned that the only reason we didn’t have worse potholes in District 6 was because we hadn’t had a severe winter that year. Well, we’re having a severe winter this year, and the weather is preying upon the region’s most vulnerable roads — no more so than Gold Coast Drive.

Last summer, when I attended a forum on the proposal to rebuild Gold Coast, I saw members of the city engineering staff acknowledge the road’s poor condition, and noted their amazement that it had been allowed to remain in such poor shape for so long. I also learned how the quick-and-dirty road building effort in the rapid build-up of Mira Mesa in 1970 and 1971 may have been, in part, to blame for the vulnerability of Gold Coast and other neighboring streets to the kind of drainage issues and damage that have been clear to anyone driving on it for well over a decade.

Cate had at least three years to move heaven and earth to serve his constituents and fix these roads by the time I entered the race to challenge him in late 2017. He failed to do so. That failure is evident at this moment along Gold Coast Drive. This is an immediate crisis. The road is a disgrace.

Declare an emergency, sir. Get on a soapbox. Use the power of your office. Do something for your neighbors. Telling constituents you’re aware of a problem and giving them the e-mail address of one of your staffers is hardly a solution. Passing responsibility for immediate action on to other city departments as though you are only a powerless bystander at the mercy of a bureaucracy is not acceptable. Neither is saying this is something that my neighbors will simply have to “suffer through.” They, and their vehicles, have been suffering with it for a lot longer than you or I have.

District 6 is desperate for a roll-up-your sleeves, get things done leader who makes a difference. My hard-working neighbors deserve it. That’s part of the reason I ran for council.

The weather will soon dry, but the problem of crumbling infrastructure and lack of leadership won’t go away. Whether by car, bus or bicycle — we have an immediate need to do better by our neighbors. Let’s start by acknowledging the crisis. It’s the roads, stupid.