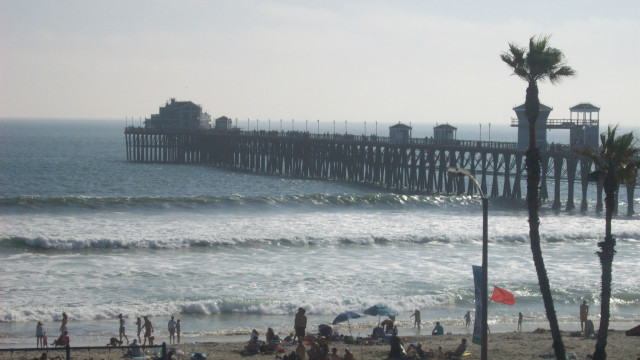 A 27-year-old former Marine died Friday morning after he jumped off the Oceanside Pier in front of his girlfriend and was swept out to sea, authorities said.

His body was retrieved from the water about a half-mile off the coast following an extensive three-hour search in the air and on the water involving Oceanside police, firefighters and lifeguards and the U.S. Coast Guard, Oceanside police Lt. Adam Knowland said.

The victim’s identity was withheld pending family notification, but Oceanside Fire Battalion Chief Pete Lawrence identified him as an ex-Marine and Oceanside resident.

Police received the call at 3:05 a.m. Friday of a person who jumped off the pier and “immediately became distressed upon hitting the water,” Knowland said. An Oceanside lifeguard said the pier is 30 feet tall, give or take a few feet depending on the tide.

“This was not a suicide,” Knowland said. “He was with his girlfriend and got a wild hair … he just jumped off after stripping down into his underwear.”

The victim told his girlfriend he planned he was going to jump into the water and swim to shore, said Lawrence, who added the victim was “reportedly a good swimmer.”

Witness Michael Cervantes, 18, of Menifee in Riverside County was on the pier and heard the victim yelling for help, Lawrence said. Seeing the victim struggling in the water and clinging to a pylon, Cervantes ran toward the beach, jumped into the water and swam to where he’d last seen the victim, but the jumper had already been swept away.

Oceanside police sent officers to search from the pier above and a rescue vessel to search the water, while lifeguards went into the surf on paddle boards and WaveRunners and the Coast Guard sent a helicopter, Knowland said.

The rip current in the area was strong, pulling the paddle-boarding life guards quickly away from shore in a northwest direction.

At 6:05 a.m., the rescue boat found the victim’s body about a half-mile away from shore, the lieutenant said. Multiple news crews on scene reported the girlfriend collapsed into a lifeguard’s arms upon hearing of the discovery.

The San Diego County Medical Examiner’s Office took custody of the body to determine the official cause of death.

Ex-Marine Jumps off Oceanside Pier in Front of Girlfriend, Swept Out to Sea was last modified: October 7th, 2017 by Debbie L. Sklar