Police in Mexico and California were on the lookout Sunday for a suspected carjacker who escaped into Mexico after leading officers from an area near the San Ysidro border crossing to the Otay Mesa gate.

On Saturday morning, a U.S. Customs and Border Protection officer at the Otay Mesa crossing fired a shot at the stolen silver Toyota Tacoma as the suspect fled. He was only described as a heavyset Hispanic man in his 30s, and he was apparently uninjured. 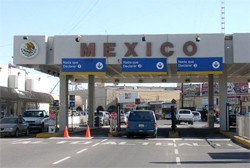 The events that led to the shooting began about 10 minutes earlier and 5 miles away in San Ysidro. The suspect allegedly forced a woman in her 30s and her 7- year-old son from an idling pickup truck at the duty-free store in the 4500 block of Border Village Drive as the woman’s husband was inside the business, police said.

Police said the suspect opened the driver’s-side door of the truck, got behind the wheel and told the mother and son to get out. The woman was able to get out with her son, but was dragged a short distance and sustained minor leg injuries. The boy was not injured.

The carjacker then sped onto eastbound state Route 905.

Patrol officers spotted the pickup truck and tried to stop it, San Diego police Lt. Manuel Del Toro said. The suspect initially followed orders, but then took off with officers close behind, he said.

The pickup truck traveled five miles east on state Route 905 to the Otay Mesa gate, where agents attempted to stop it. The suspect then drove toward the agents, Del Toro said.

One of the agents fired a shot at the pickup truck, but the driver continued into the La Mesa neighborhood of busy Tijuana, according to police.

The suspect was then chased for a distance by Mexican authorities, but was ultimately able to escape, Del Toro said. The truck was later found abandoned in Tijuana, he said.

None of the law enforcement officers involved in the incident were injured, Del Toro said.

U.S., Mexican Authorities Search for Carjacking Suspect Who Escaped into Tijuana was last modified: May 25th, 2014 by Christine Huard