A California think tank is sounding the alarm that the state isn’t on track to meet ambitious greenhouse gas reduction goals without dramatically picking up the pace.

Complicating the effort, the think tank reported last week that even where the state has found success, climate-warming gases produced by 2018’s wildfires vastly outstripped pollution cuts across the economy the previous year.

It’s a bleak picture outlined in the California Green Innovation Index, an analysis prepared by research consulting firm Beacon Economics and published by Next 10, a non-partisan think tank that has produced 11 editions of the Index. This, however, is the first time Next 10 has warned — in a forward by founder Noel Perry — that at the current pace, “we would meet our 2030 target 30 years late and our 2050 target more than 100 years late.”

Next 10’s blunt warning comes on the heels of a more optimistic announcement from California’s climate enforcers. And indeed, not everyone thinks the situation is as dire. In August, the Air Resources Board announced that 2017 was the second consecutive year that the state beat its goal to cut greenhouse gas pollution to 1990 levels by 2020. California also generated more electricity from carbon-free than from polluting sources in 2017.

“This is further evidence that California’s groundbreaking climate regulations are helping to deliver the greenhouse gas reductions needed to meet our 2020 target – and give us a running start at our even more ambitious 2030 target, too,” Air Resources Board chief Mary Nichols said in a statement at the time.

The new goals Next10 are pointing to call for cutting greenhouse gases another 40 percent over the next 10 years en route to an 80 percent reduction by 2050. And with the transportation sector belching out more than 40 percent of the state’s emissions, the hard work is still ahead.

“Almost all of the success has been in the electricity sector, and almost all of the low hanging fruit is gone,” said Danny Cullenward, policy director at climate change think tank Near Zero. “Meanwhile, the transportation sector is going in the wrong direction.”

Even observers who think California is in better shape than the Next 10 report suggests say the state will need to do more to hit the 2030 targets.

“We’re in a good position to get most of the way toward our target, but more policies are going to be needed,” said Chris Busch, research director for the energy and environmental policy firm Energy Innovation, who was not involved in the Index. “Next 10 has been such a cheerleader and supporter and promoter of the state’s actions. To have them raising this alarm makes it more poignant,” he said.

The report walks through sectors of California’s economy, from electrical generation to energy efficiency to transportation. It points to a steady rise in greenhouse gas pollution from landfills since 2004 to make up 2 percent of California’s total in 2017.  It’s a polluter that tends to be ignored, according to Adam Fowler, director of research at Beacon Economics, who contributed to the report. “A Tesla is flashy and exciting for column inches, but the Big Mac wrapper, and the wrapping from whatever we purchased at a big box store — that does matter, too.”

Fowler and his colleagues took a look at another major pollution source that the air board doesn’t even count against California’s greenhouse gas goals: wildfires. Based on the air board’s preliminary data, Fowler’s team reported that wildfires produced about nine times more carbon dioxide in 2018 than the state cut across the entire economy during the previous year.

Air board spokesman Stanley Young said it’s misleading to compare the carbon emissions from wildfires, which he said is part of the natural carbon cycle, to those from fossil fuels that would otherwise stay in the ground.

But Fowler argued that wildfire behavior has been changing — and scientists agree that not only is climate change worsening wildfires, but people are responsible for the majority of ignitions across most of the US. “We’ve just seen a shift in the wildfire behavior in California and in a lot of places around that globe that is just very different from the historic, cyclical burns,” Fowler said. 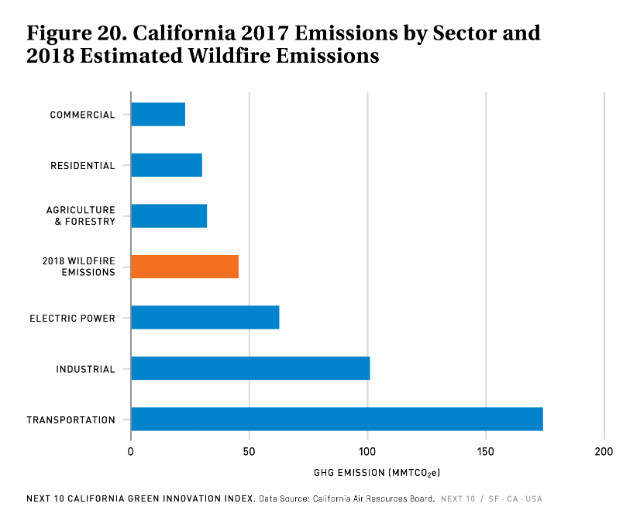 Across the categories California tallies as part of its annual emissions inventory, however, California’s number one greenhouse gas polluter was transportation. Tailpipe emissions continue to rise since dipping to a low point in 2013.

Rates of car ownership also increased to hit 80.6 cars per 100 people in 2018. Only about four vehicles for every 100 people were hybrids or zero emissions vehicles, however. And Californians are increasingly gravitating toward light-duty trucks — a category that includes pickup trucks, minivans, and SUVs — which made up more than half of new vehicle registrations in 2018.

There is a hint of good news buried in the stats about climate-warming tailpipe pollution. Californians drove more miles in 2017 compared to 2016. But the miles Californians drove increased faster than greenhouse gas emissions — which means Californians are driving cleaner, Fowler said. “The standards and policies are having a bit of an effect,” said Fowler, who called the trend “a hat tip to our fuel economy standards.”

Still, they won’t be enough to staunch the flow of greenhouse gases from tailpipes, which  Nichols said in 2018 will require a “deep transformation. And changing California’s car culture — that transformation Nichols wants — is widely believed to be a significant challenge on its own. Add to that the state’s battle with federal regulators to manage its own clean-car rules and the goal becomes even more difficult.

When the federal Environmental Protection Agency last month yanked California’s special authority to set its own tailpipe emission standards, officials said they would take the fight to court. “There’s just no way we can reach our goal unless we are able to move forward with that waiver and the provisions that it allows us,” California Gov. Gavin Newsom said at an environmental summit, according to The Los Angeles Times.

California shouldn’t bank on winning that fight if it heads to the Supreme Court, according to Michael Wara, director of the Climate and Energy Policy Program at Stanford University. “I don’t think we can count our chickens,” he said. “We need to pick ourselves up, dust ourselves off, and have a plan that doesn’t depend on everything working out.”

That plan, he said, could include cleaning up freight, for example, and letting car dealers cash in on the rebates that the state deals out to people buying clean cars. It could also include improved housing density, although an effort by Democratic state Senator Scott Wiener from San Francisco to bolster housing around public transit stalled in the state legislature this year.

California’s air board points to recent “examples of California’s full-throated commitment to transforming the transportation sector, where we face the biggest challenges.” That includes Newsom’s recent executive order to reduce emissions from state-owned businesses and vehicles and to develop a framework for investing pension funds in greening California.

Getting California on track to meet its climate targets won’t be easy, Wara said. “Let’s roll up our sleeves. This is not a reason to pack our bags and go home and be sad. This is a reason to double down.”

California Warned It Might Not Achieve Its Ambitious Climate Goals was last modified: October 14th, 2019 by Editor