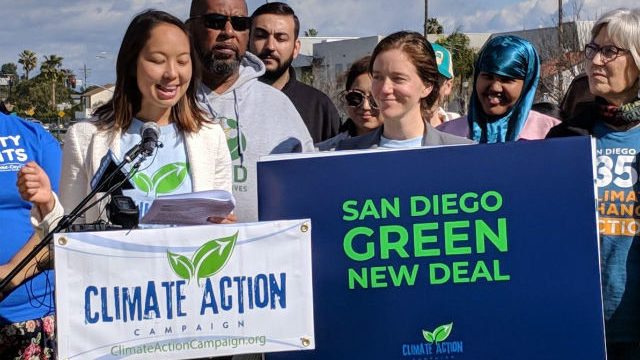 The San Diego County Board of Supervisors unanimously voted Wednesday to develop a new climate action plan that focuses on accomplishing zero carbon emissions within 15 years, helping communities with environmental challenges such as poor air quality and supporting a “green” economy.

The board directed Chief Administrative Officer Helen Robbins-Meyer to create the plan with public input, in the form of hearings. Robbins-Meyer was directed to update the board on a monthly basis during the development process.

Supervisor Terra Lawson-Remer, who proposed the new plan with board Chairman Nathan Fletcher, said the county “should give the climate emergency the urgency it deserves.”

“The goal is simple: The county must put itself on a path to de-carbonizing San Diego County as soon as possible,” Lawson-Remer said, adding that the need for a new plan “reflects the residents of our community” and their concerns about climate change.

If the county does nothing, future generations will face an environment of worsening wildfires and pandemics, Lawson-Remer said.

Fletcher said that along with greenhouse gas emissions and equity, the county can realize a future with good green jobs and a reduction in vehicle miles for commuters.

Supervisor Nora Vargas said it’s important to include communities in any climate action plan. She added that her district has suffered serious air quality issues, and “we have to have meaningful engagement” on environmental justice.

Supervisors Joel Anderson and Jim Desmond said while the plan’s environmental goals are important, it is also a good idea not to forget the lack of affordable housing in the county.

A new plan “will speed up the process and lower costs,” but it’s important “to avoid having lofty goals that are impossible to attain,” Anderson said.

“I would caution that we not get too far ahead of technology,” Anderson added.

Desmond reminded his colleagues that the county still has to build 6,700 units in the unincorporated area to keep up with housing needs.

Fletcher noted that a previous board adopted a climate action plan in 2011, “and here we are a decade later.”

That original plan faced legal challenges; last year the 4th District Court of Appeal ruled it to be insufficient.

Before voting, supervisors heard from environmental representatives, who offered their support.

Monica de la Cruz, a climate justice advocate with the Environmental Health Coalition, said she was encouraged by new leadership on the Board of Supervisors and looked forward to “a bold new plan.”

Peter Anderson, of the Sierra Club chapter in San Diego, said the U.S. Department of Defense lists climate change as the No. 1 existential threat, “not Russia, not China, (or) terrorism.”

Noah Harris, of the Climate Action Campaign, thanked the supervisors for their renewed dedication to the environment. He added that it was also important for the county to move away from fossil fuels as soon as possible, and reject standard carbon-exchange plans.

A new climate action plan is part of what Fletcher calls his “Framework for the Future of San Diego County.”

According to Fletcher’s office, the framework “prioritizes communities and populations in San Diego that have been historically left behind.”

On Tuesday, the board also supported proposals to declare racism a public health threat and for greater transparency in how county government operates.