Maybe you know him as the sandy haired man in a blue sweater telling Congress to impeach President Trump. Or you remember him standing against a New York skyline asking President Obama to reject the Keystone XL oil pipeline. Or maybe you just know him as that fantastically rich guy from San Francisco — if you know Tom Steyer at all.

For decades, Steyer has played at the edges of electoral politics as money man and activist. Having amassed a fortune in finance, he’s plowed more cash into the political system than nearly any other American while launching his own crusades, which have alternately aided and frustrated Democrats.

Now California’s largest mega-donor is running for elected office — the highest one. His wealth may make him an imperfect candidate to fight the corrupting influence of money in politics. Or maybe he’s the ideal one. A “progressive answer to the Koch brothers,” a billionaire businessman without elected experience hoping to take on Trump, the “fight fire with fire” candidate.

With the help of a massive ad budget — and a stated willingness to spend “at least $100 million” —  Steyer has met the Democratic National Committee’s polling and individual donor qualifications for the next televised debate on Oct. 15. Nonetheless, in his home state, a recent poll put him at 1% among Democratically-inclined voters.

Here are five ways that California shaped Tom Steyer, and that Steyer has shaped California.

A ‘Super Achiever’ Who Became a Billionaire

Jim Steyer is clearly biased, but it’s hard to argue when he describes his younger brother as “an unbelievable off-the-charts super-achiever.”

From an early age, Tom Steyer has hopscotched from one rarified sphere of American prestige and privilege to the next. His resume starts at the Upper East Side of New York’s The Buckley School, a private K-9 that educated Franklin Roosevelt and a young Donald Trump. Next stop was Phillips Exeter, the patrician New Hampshire boarding academy. Then Yale, where Steyer studied economics, played soccer and graduated at the top of his class. A brief stint at Morgan Stanley, a business degree at Stanford and a job at Goldman Sachs rounded out Steyer’s gilded early resume.

And that was before he became a billionaire.

In San Francisco, Steyer teamed up with the banjo-playing financier Warren Hellman and started a hedge fund. It would eventually be named Farallon Capital and grow from $15 million to more than $20 billion investing diversely: corporate mergers, distressed Asian banks, pharmaceutical companies.

Today Forbes estimates Steyer’s net worth at $1.6 billion. But Farallon’s past investments in coal mines, private prison companies and aquifer-pumping land deals may not jibe with Democratic voters. Neither might Steyer himself — a white guy from high finance.

“The whole issue of income inequality has become a fairly major talking point with Democrats,” said Garry South, a California political strategist. “Why would you think that a billionaire is the best person to deal with income inequality? It’s sort of a contradiction in terms.”

Steyer is a bit of a contradiction himself. In the mold of Warren Buffet, he is famously restrained in his spending habits (to a point). His sartorial style could be described as “Boomer dad”: He regularly wears the same tartan tie and a colorful beaded belt he bought on a trip to Kenya. He flies commercial, for environmental reasons. Speaking to CalMatters over the phone from Iowa, he recalls meeting a “slick-as-could-be” energy lobbyist a few years back who was wearing a “$5,000 suit.” As if Steyer couldn’t drop ten times that on a new outfit every morning for the rest of his life.

Like Buffett, Steyer also has pledged to give away at least half of his wealth before he dies.

He has spent big on philanthropy, progressive political causes and now, his personal campaign. To his critics there has always been a blurry line between those last two.

Not so, said his brother, Jim. “He’s put his money into what he believes in — in a genuine way,” he said. “He’s not about his own political advancement.”

Steyer was preparing for retirement from Farallon when he began to think seriously about climate change — an issue at the core of most of his political activity ever since.

“It was just sitting around the table with my kids,” he said, the father of four young adults. “What are the issues that we’re going to look back on and go like, ‘Wow, those people were really clueless’?”

In 2010, he co-chaired the committee to defeat a repeal of the state’s cap-and-trade emissions reduction program, putting $5 million into the effort. He struck Dan Logue, a former Republican Assemblyman who sponsored the measure and debated Steyer that year, as a true believer “committed to the cause.”

In 2012, Steyer ratcheted up his financial involvement, spending $30 million on a ballot measure to close a tax loophole, effectively raising rates on businesses with out-of-state facilities. In 2016, he spent millions more on an unsuccessful bid to overturn the death penalty, and successful initiatives to raise cigarette taxes and reduce sentences for non-violent crimes. 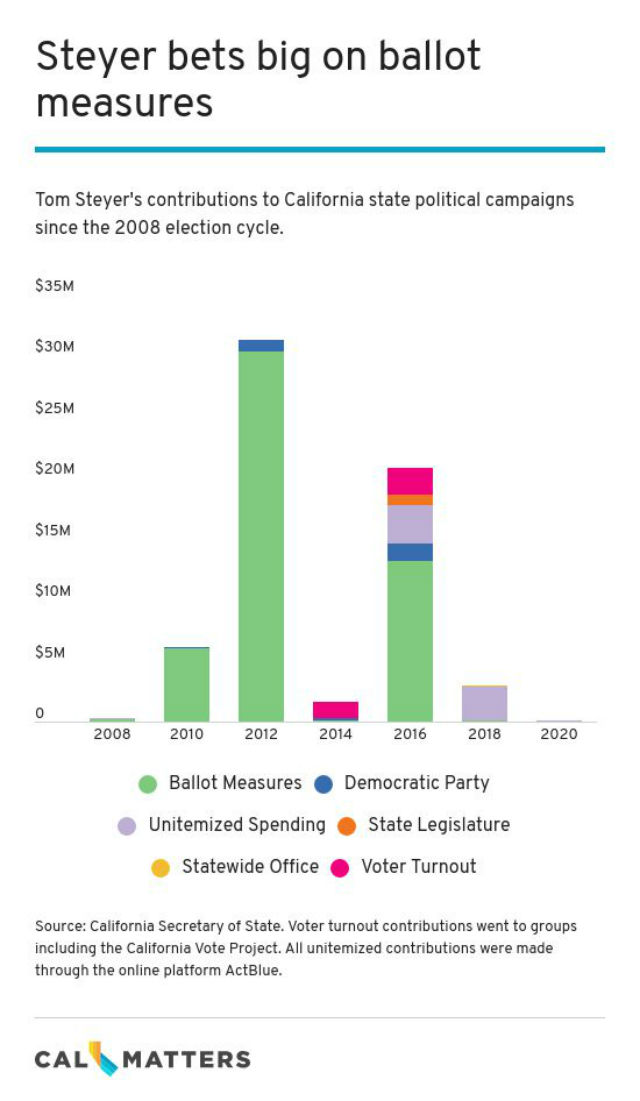 Steyer’s early focus on voter-initiated policy change runs through into his presidential campaign. He’s proposing to give voters the power to directly make federal law twice each year.

He also favors term limits for members of Congress, and independent redistricting commissions in every state. All of these reforms are familiar to California voters. “I’m informed by what I’ve lived through,” he said.

They also require amending the U.S. Constitution. That’s no easy feat, but according to Steyer, who lacks much faith in the legislative political process, it’s also necessary.

“My thesis on this whole campaign,” he said, “is that we have a broken government.”

Many California voters may not know who Steyer is, but California politicians do.

Starting in 2013, Steyer began throwing his considerable financial weight behind individual candidates across the country through NextGen Climate Action Committee, a super PAC he started to help make climate change a winning issue for progressives.

In the lead-up to both the 2014 and 2016 elections, Steyer’s family firm, Fahr LLC, was the biggest contributor of publicly disclosed political cash of any organization in the country. (Fahr, his middle name, was his mother’s maiden name.) In 2018, Fahr slipped to second place. So far in the 2020 cycle, the Steyers are back in the top spot.

That largesse has endeared him to some Democrats.

“I know the difference between talkers and doers and Steyer is a doer,” said Bob Mulholland, a Democratic National Committee member from California.

“Some candidates can come and be the main speaker at a dinner and that’s nice. But if you can write big checks…,” he said, trailing off.

“He deserves the Heisman Trophy of politics,” he added. Though perhaps not the Democratic presidential nomination. Mulholland has endorsed Sen. Kamala Harris.

Steyer has spent a lot of time and energy pressuring Democrats to take positions they are not inclined to take.

In 2013, he vocally contested the nation-spanning Keystone XL pipeline project at a time when many Democrats we hesitant to alienate organized labor or voters in Midwest swing states. In January 2014, he ran an anti-pipeline ad during President Obama’s State of the Union address.

Since then he has snubbed the party establishment by backing his former political ally, ex-state Sen. Kevin de León, over incumbent Dianne Feinstein for U.S. Senate. This summer, he spoke before the Democratic National Committee’s meeting in San Francisco—and scolded them for refusing to sponsor a climate debate and “chasing corporate money.”

Yet the party has benefited from many of Steyer’s side projects.

In 2017, NextGen Climate changed its name to NextGen America, expanding its focus beyond climate activism. According to the organization’s data, its volunteers registered over 250,000 young people to vote. The rebranding reflected the organization’s broadened ambitions — but also, perhaps, those of its founder.

Since Trump’s election, Steyer has made dislodging President Trump a focus. In 2017, he launched Need to Impeach, which began running pro-impeachment ads. Many featured Steyer prominently.

“He took a much more forceful stance on impeachment than most of the party leadership was willing to take at that point,” said Dan Schnur, a professor at UC Berkeley and USC and a former consultant. “Fairly or unfairly, that re-enforced a perception that he was in this for himself.”

In 2018 House Speaker Nancy Pelosi called impeachment efforts a political “gift” to the GOP, although she did not name Steyer. Former Obama advisor David Axelrod did, criticizing Steyer’s “vanity project.”

Now recent news has brought most of the Democratic Party around to his view.

“What I said is, ‘Americans should add their voice to a petition, so we can push the elected officials to do what we know is right,’” Steyer said. “I view this as a triumph for grassroots democracy and the American people.”

So far, more than 8 million people have signed that petition, creating a gold mine of voter data. But South, the Democratic consultant, doubts it will translate into support for a Steyer candidacy.

“He did all these ads, some guy talking directly to the camera about how Trump’s a schmuck and we ought to impeach him,” he said. “It doesn’t mean, no matter how many millions of dollars he pumps into it, that people really identify him with the whole effort.”

For years, many have speculated that Steyer, whose last electoral bid was to be student body president at Exeter, would run for…something.

In 2015, after U.S. Sen. Barbara Boxer announced her retirement, Steyer publicly considered but then declined to run for U.S. Senate, saying he wanted to focus on state-level politics.

In 2017, Steyer mulled both a run for senator and governor, but again declined, saying he instead felt “called” to organize voters.

Earlier this year, Steyer seemed prepared to follow the same script. “I will be spending one hundred percent of my time, effort and resources to one cause: working for Mr. Trump’s impeachment and removal for office,” he told reporters in Iowa in January. “I am not running for president at this time.”

“At this time” apparently being the operative term. Seven months later, he announced his candidacy.

Why the change of heart? Steyer said he was disappointed with the current crop of candidates.

“People are talking about policies that they can’t get, as if they could get them,” he said. “Unless you break the corporate stranglehold on our government, you’re not getting any of that stuff. It’s not a question of what Green New Deal or which healthcare plan or which college debt plan is going to work. No. Take a look. They’re not on offer.”

Not that he’s exactly a centrist. By touting new constitutional amendments and a pledge to zero out most major carbon emissions by 2040, he just dreams big progressive dreams in a slightly different direction.