Californians are increasingly pessimistic about the future of the state and are more worried about housing and homelessness than ever before.

And at least according to one major poll, they’re beginning to take it out on Gov. Gavin Newsom and the Democratic state Legislature.

But the new round of numbers are in sharp contrast to a survey released on Monday by UC Berkeley’s Institute of Governmental Studies, which found likely voters approving of Newsom by a margin of nearly 20 percentage points.

The PPIC poll also found that 1 in 4 Californians now point to housing and homelessness as the “most important issue facing people in California today.” Of the 1,700 adults surveyed, 15% listed “homelessness” as a top concern and 11% named housing.

Another 15% said “jobs and the economy.”

While jobs are a perennial concern for Californians, this is the first time the state’s homeless crisis was a top source of public angst, said PPIC president Mark Baldassare.

“We started polling in 1998. It’s never been tied for number one,” he said. “Democrats, Republicans, independents all had it in the first tier of concern.”

Those concerns are part of a broader feeling of “political and economic malaise” across the state, he said.

Roughly half of the respondents said that the state is headed in the “wrong direction.” Likely voters were even more pessimistic, with 54% offering a grim prognosis of the state’s future, including 60% of political independents.

And that seems to have translated into lower approval ratings for the state’s elected lawmakers.

Nearly a year into his first term, the poll found that 44% of likely voters disapprove of the governor. That’s the first time the survey has found more voters with a negative opinion of the state’s governor than a positive view since 2012.

The survey had other bad news for state lawmakers, one of whom happens to be running for president. An outright majority of likely voters (51%) said that they disapprove of the state Legislature and 46% disapprove of U.S. Sen. Kamala Harris.

Presidential support for California’s junior senator fell to just 8% among Democratic-leaning voters statewide — well behind Elizabeth Warren, Bernie Sanders and Joe Biden, who were in an effective three-way tie for first place. 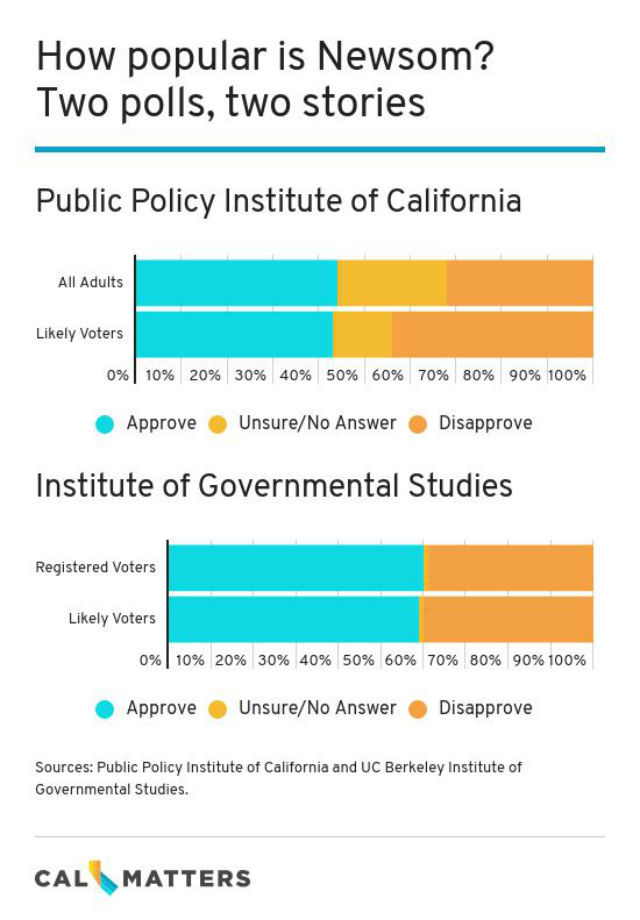 Thursday’s poll ought to give the new governor a bit of public opinion whiplash.

On Monday, the Berkeley IGS poll reported that 60% of registered voters either strongly or somewhat approve of the governor’s job performance versus 39% who do not.

The much higher approval rate in the Berkeley survey is likely due to the fact that while the Public Policy Institute’s phone survey allows respondents to register no opinion, Berkeley’s online poll does not.

Even the Berkeley survey offered a mixed bag for the governor when you scratch beneath the surface: 42% of respondents said that they only “somewhat approve” of the governor.

There are other methodological differences between the two surveys, though both are respected and have established track records for accuracy. Even if well-designed and administered, individual polls may occasionally produce out-of-whack estimates just by random chance.

The new polling also offers mixed news for supporters of some of the ballot measures likely to be on the 2020 ballots.

Asked about a $15 billion bond that would fund public school infrastructure construction and upkeep, 54% of likely voters in the Public Policy Institute survey said that they would vote for it. Supporters are still waiting for Gov. Newsom to sign a bill that would place the measure on the March ballot.

But likely voters are evenly divided (47% to 45%) on a proposal, often referred to as “split roll,” that would raise property taxes on large companies, resetting rates based on the current market prices of land and buildings. That idea is opposed by all of the state’s major business groups.

“Split roll clearly being under 50% is a difficult place to start, especially knowing that there is a ‘no’ side to that ballot initiative that is not shy about spending millions of dollars,” said Baldassare.