An unprecedented haul of tax dollars generated by a roaring economy. A governor who campaigned on a big-ticket policy agenda of long-time lefty favorites, including universal childcare and state-funded healthcare for all. A Legislature so thoroughly packed with Democrats it gives rise to a new term—”giga-majority.”

Californians could be forgiven for expecting it all to add up to liberal bonanza, a gusher of policies that the Democratic Party’s base has been clamoring to enact for decades.

But as the new super-blue Legislature sends Gov. Gavin Newsom his first state budget and the Capitol passes the halfway point for making new laws this year, the progressive policies that are advancing amount to less of a torrent than a trickle.

California may look pretty far to the left from a national perspective, but state-wise, lawmakers have already killed or downsized major items on the progressive wish list. They rejected bills to rein in charter school growth, curb oil production, expand data privacy rights and regulate e-cigarettes. They drastically scaled back ambitious agendas to protect renters and limit soda consumption.

Though they approved some big progressive goals—giving workers more paid time off to care for a new baby, boosting government funding for healthcare and childcare—those policies have been whittled down from their original versions, making them more incremental than revolutionary.

If voters expected last year’s blue wave to upend policymaking-as-usual in Sacramento, it seems, at least for now, that the old rules still apply. Why? Moderating forces are still at work: swing-district Democrats remain tax-wary, lobbying and campaign money still wield a lot of influence, and virtually no one wants to burn through the state’s $21 billion budget surplus or its nearly $16 billion rainy day fund.

“There was a lot of talk that with a supermajority and a very progressive governor, things were going to go crazy. But when you’re sitting in that spot and looking at what’s going on, you have to hold the line,” said Dana Williamson, a Democratic political consultant who worked closely with former Gov. Jerry Brown.

“It’s also not as easy as everyone thinks to get a two-thirds vote, even when you have a supermajority.”

Democrats now hold about 75 percent of the Legislature’s seats and most bills need only a simple majority to pass. But some measures—notably, any tax increases—must be approved by two-thirds of both houses. Legislative leaders have historically been strategic about using the supermajority, saving it only for high-priority votes. Even then, getting to two-thirds usually involves a lot of negotiation and heartburn because swing-district Democrats are leery of casting votes that their constituents could see as too liberal.

“All Democrats aren’t created equal,” said Holly Mitchell, a Los Angeles Democrat and chair of the powerful Senate budget committee. “We all celebrated having a supermajority in both houses. But we have to recognize that some of those areas where we were able to elect Democrats… are probably more purple than blue.”

Instead, lawmakers and Newsom have agreed to clean up toxic drinking water by siphoning some money designated for projects to combat climate change. That frustrated environmentalists who say a progressive legislature and governor should not raid funding for climate programs but instead find another way to pay for water clean-up—even if it means voting for a new tax.

“What’s the point of having a supermajority if you don’t do the hard and scary thing?” said Mary Creasman of the California League of Conservation Voters.

A “sucker state,” or one failing to deliver on its progressive promises?

Of course, moderation is in the eye of the beholder.

“Governor Newsom proposed one of the most big-hearted and progressive budgets in memory and did so in a responsible way that builds historic reserves and saves more funding for a rainy day than at any point in our history,” wrote Nathan Click, a spokesman for the governor. “And in his first 6 months in office, the Governor has helped thrust the state to the forefront of the fight for justice and the national conversation—from taking on Big Pharma to putting a moratorium on the death penalty to fast-tracking humanitarian and legal aid for asylum seekers and refugees.”

And on the national spectrum, California is still regarded by many as a leftist outlier. Its plan to become the first state to offer health insurance to low-income undocumented immigrants under age 26 has been lambasted on the right, with Fox News commentator Laura Ingraham calling California a “sucker state.” The governor’s most recent budget proposal puts the annual cost at $98 million.

But that plan is a scaled-down version of a Senate proposal that would have covered undocumented senior citizens as well, with an added yearly cost of $115 million. And it’s a far cry from the governor’s campaign vow to push California toward a single-payer healthcare system—with an estimated price tag in the hundreds of billions.

“The hope from this blue wave—more Democrats, more progressive action—that remains to be seen,” said Stephanie Roberson, a lobbyist with the California Nurses Association, which advocates for a state-funded universal healthcare program and endorsed Newsom last year, spending over $735,000 to help elect him. Earlier this year she said she expected a single-payer bill, but nothing was ever introduced.

“There are a lot of issues that you would assume would have passed, so yeah, there are some surprises,” she said. “What we should be doing with these supermajorities is using them to our advantage to pass really good reform. Hasn’t been exercised yet.”

Anthony Wright of Health Access California, a nonprofit health advocacy group, applauded the governor’s “first steps” on expanding health care: issuing an executive order to begin creating a way for the state to buy prescription drugs in bulk, including in his budget a mandate that all Californians buy health insurance, and sending a request for a waiverfrom the Trump administration to redirect federal funds to a future single-payer program.

“We’re not going to get to full universal coverage in one year,” Wright said. “But he hasn’t laid out what his next steps are.”

While California is in the grip of a severe housing crisis, lawmakers rejected several pro-tenant bills, such as one that would have given them more protection from evictions. The lone survivor: a weakened anti-“rent-gouging” bill that caps annual rent increases at roughly 9%, exempts landlords who own fewer than 10 homes and would expire after three years.

Contrast that with New York, where Democratic lawmakers this week announced an agreement on a package of bills to not only strengthen rent control in New York City but allow it to extend statewide—a move that the New York Times said left big landlords “in shock.”

The governor has also thus far resisted calls to ban fracking, despite vows to do so on the campaign trail.

California progressives have scored a few notable wins. Newsom used his executive power to stop all executions while he’s in office. The Assembly passed a bill to limit when police can justifiably kill and another to cap interest rates on “predatory” loans targeted at low-income consumers. The budget includes a sales tax exemption for diapers and tampons.

But even those wins come with asterisks.

Prosecutors are still seeking the death penalty in some murder cases because only voters can repeal California’s capital punishment law.

The original version of the police reform measure—proposed by a broad coalition of civil rights groups—didn’t seem to have enough votes to pass. Instead, lawmakers passed a version that reflects a compromise with law enforcement, causing Black Lives Matter to remove its support. The American Civil Liberties Union remains a key supporter and the group spent heavily lobbying the statehouse—nearly $1.2 million in the first three months of the year.

Meanwhile, the bill to prohibit triple-digit interest rates on some consumer loans faces an uphill climb in the Senate, where it will go before its first committee next week.

And those who dug into the details of the governor’s budget found it was often less than it seemed: His cancellation of the menstrual product tax, for example, would expire in two years. When a Newsom aide told a panel of lawmakers that a future decision to extend the tax break for longer would depend on the state’s economic condition at that time, Democratic Assemblywoman Cristina Garcia shot back:

“Our uteruses shouldn’t be used to balance our budget down the road.” 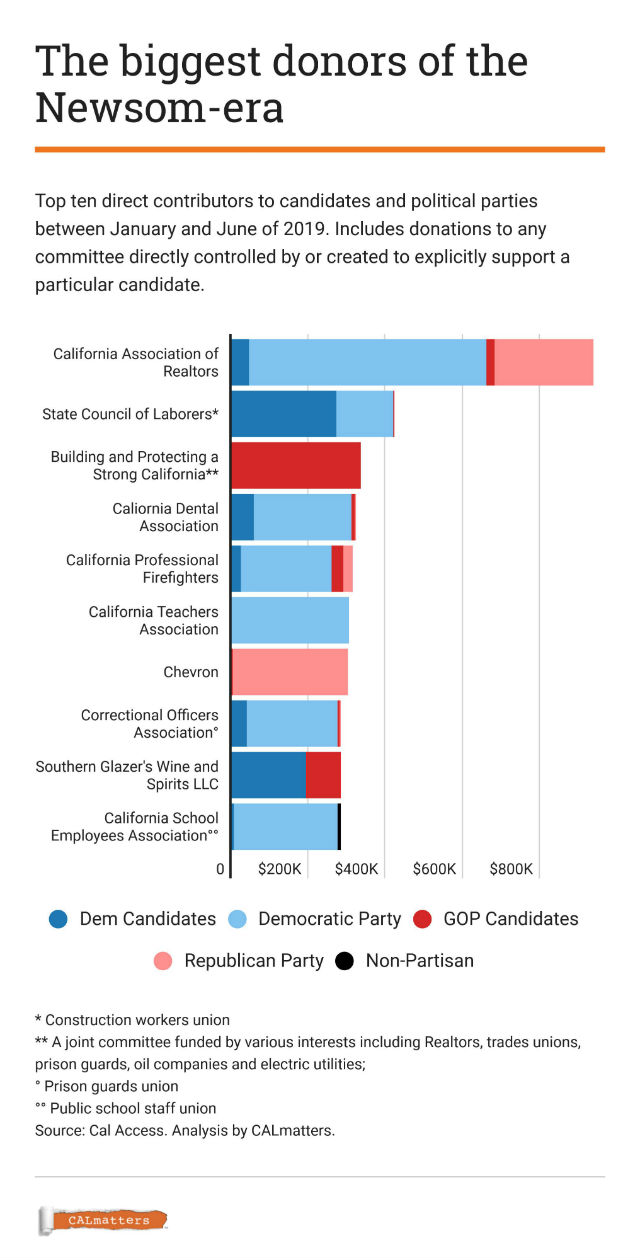 The relatively restrained pace of change has come as a pleasant surprise to many political moderates and business interests. Of the 31 bills stamped with the California Chamber of Commerce’s “job killer” label—a moniker for the policies it lobbies most strongly against— lawmakers have quashed all but five.

Chamber president Allan Zaremberg attributes his organization’s high success rate in a Democratic-dominated Legislature to a combination of “good lobbying and their bad ideas.”

Good lobbying is expensive. The Chamber is among the biggest spenders on lobbying in Sacramento—nearly $720,000 in the year’s first quarter. The Chamber joined major tech firms in lobbying against two bills that would have expanded consumer protection under a landmark data privacy measure California passed in 2018. Lawmakers quietly shelved both of them.

The oil industry—a political boogie man for many progressives and Sacramento’s most lavish lobbying spender—is so far faring pretty well in the Democratic-controlled statehouse. Lawmakers have already killed nearly half the bills the Western States Petroleum Association lobbied on this year. That includes a bill to increase reuse of treated wastewater by restricting how much can be released into the ocean, and a proposal to prohibit new oil and gas operations within 2,500 feet of homes, schools, playgrounds and healthcare facilities.

Industry lobbying helped kill several bills meant to promote public health by limiting vaping and soda consumption. Soda companies more than tripled their spending on lobbying in Sacramento during the first three months of the year. They convinced lawmakers to jettison four of five measures backed by doctors, dentists and public health advocates that sought to limit how much sugar Californians drink. Lawmakers also snuffed out bills meant to curb teen use of e-cigarettes by banning the sale of products with enticing flavors.

The California Association of Realtors, who typically oppose restrictions on property owners, spent over $400,000 on lobbying and nearly $1 million (more than any other group) on campaign spending this year so far. That could help explain why all but one of the state’s high-profile pro-renter bills have died already.

The effect of all that money may be put to the test next week as the Senate takes up a bill at the center of one of the year’s biggest battles between organized labor and business interests. The Assembly has passed the proposal, which would force gig-economy companies such as Uber and Lyft to treat their contractors as employees, guaranteeing them minimum wage and other basic worker protections.

One big test of Newsom’s progressive agenda remains: whether he’ll be able to increase payments to low-income Californians by changing the state tax code.

He has proposed increasing the Earned Income Tax Credit—an anti-poverty program that has historically garnered bipartisan praise—by bringing California’s tax code in line with changes Republicans enacted to the federal code in 2017, such as placing new limits on the losses, workplace-related expenses and interest payments that businesses have traditionally used to lower their tax bills. The governor’s office estimates that nixing those deductions would raise an extra $1.7 billion from wealthier Californians and businesses and redirect it to poor people.

“That sounds like the kind of thing you would expect to pass in a Legislature dominated by Democratic politics,” said Chris Hoene, president of the California Budget and Policy Center, who supports the governor’s proposal.

But Assembly Democrats—fearful of potential political attacks—have yet to come on board.

Senate leader Toni Atkins of San Diego said Democrats in her chamber support Newsom’s proposal. But looking more broadly at negotiations among the governor and both legislative leaders, Atkins observed what may become the motto of 2019: “All three of us are sort of moderating each other.”