Faulconer and Ward’s news conference marked the beginning of phase one of the Downtown Mobility Plan, roughly two and a half years after the City Council unanimously approved it. Once complete, the plan calls for the addition of about nine miles of cycle track through downtown — bike lanes with a barrier to protect cyclists from vehicle traffic.

“As we encourage people to get out of their cars more, we need to build transportation networks that provide safe paths of travel for everyone,” Faulconer said. “Connecting the popular destinations in downtown to surrounding neighborhoods is an important step in that direction and will give San Diegans more opportunities to embrace the surge in mobility options over the past year.”

The council approved the plan in June 2016. Faulconer originally suggested that the entire plan could be finished by June 2019, but delays and higher-than-expected costs pushed the project back. In March 2018, city officials told the city’s Bicycle Advisory Committee that project costs had jumped from roughly $10 million to $25 million. 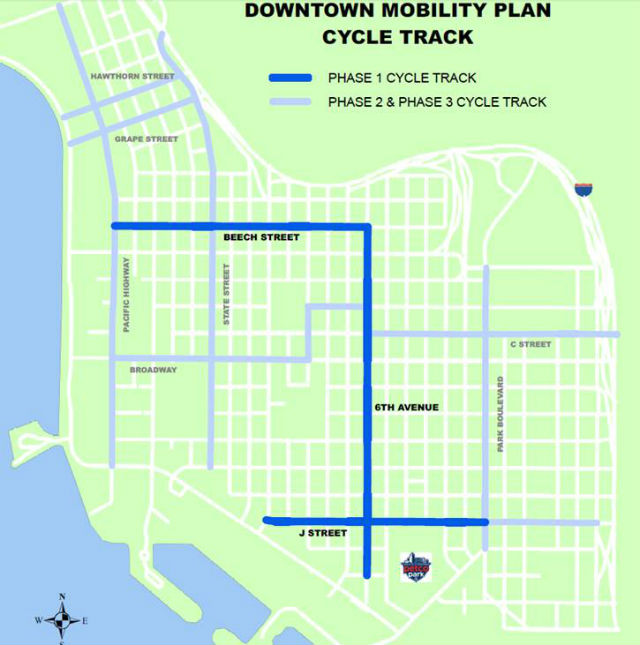 “The Downtown Mobility Plan is a vital step forward in providing safe infrastructure for all San Diegans and to meet our mobility goals,” Ward said. “San Diegans are ready for new and innovative mobility options as they move around our city, and this investment will improve the quality of life for those living and working downtown while moving San Diego closer to achieving our Climate Action Plan benchmarks.”

City officials expect to complete all three phases of the plan by the end of 2021. The network of track will eventually stretch from Balboa Park to the San Diego Convention Center, according to the city.

“On the bike front, we’re overjoyed change is coming after many years of advocacy,” said San Diego Bike Coalition Executive Director Alex Hanshaw. “Prioritizing people who choose to bike and walk is a historic step in the right direction. The lanes also come in a crucial time as we’re seeing more people opt for this choice in their commutes, especially as bikeshare and other shared mobility options become more accessible.”