On election night, Susannah Delano, executive director of Close the Gap CA, a group focused on increasing the share of women in the state legislature, made a prediction: “2018 will be the biggest single leap for women in state history.”

Now the numbers are in.

Sure enough, the 2018 midterm election in California was a high-water mark for women seeking elected office. But it was also a reminder of just how male-dominated our politics remain.

Though not every race has been called, it appears 53 women were elected at the state and federal level across California this year. That includes 28 members of the Legislature and 19 members of Congress, as well as three statewide constitutional officers—Lt. Gov.-elect Eleni Kounalakis, Treasurer-elect Fiona Ma and state Controller Betty Yee.

That’s a higher number than any other election this century. It’s also a record-high rate: one-in-three winning candidates this year were women. Or, to put it another way, men hit a record-low, winning a measly two-thirds of all state and federal races across the state.

Many saw this coming. Since our last federal last election, we’ve seen the inauguration of President Trump and two rounds of nation-spanning Woman’s Marches; we’ve seen the downfall and prosecution of Hollywood titan Harvey Weinstein and the emergence of the #MeToo movement; we’ve seen the resignation of lawmakers in Washington D.C. and California in the face of sexual assault allegations and the appointment of a Supreme Court Justice despite them.

And while many have dubbed 2018 the second “year of the woman,” a redux of 1992 when a record number of women were elected to federal office including U.S. Sen. Dianne Feinstein, it might be more accurate to call 2018 the “year of the Democratic woman.” 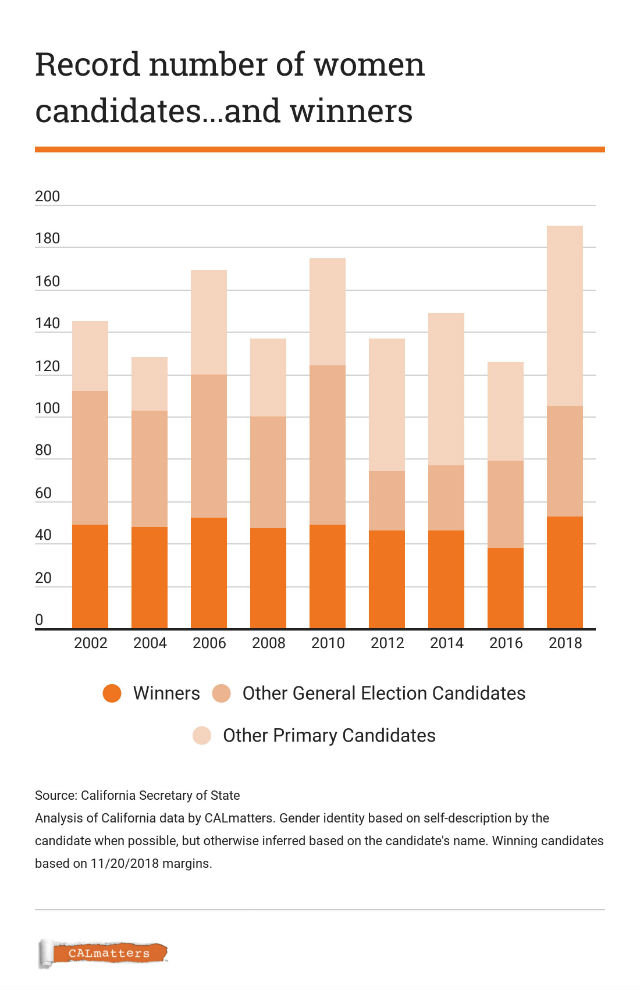