With election day about six weeks away, the 2018 midterms are beginning to feel a lot like 1992.

That was the year a record number of women were elected to federal office—California’s senior U.S. Sen. Dianne Feinstein among them—many riding a wave of revulsion to the perceived mistreatment of Anita Hill, the law professor whose sexual harassment accusations against Clarence Thomas failed to deter his Supreme Court confirmation.

Today, as the tortured confirmation hearings of Brett Kavanaugh reached their emotional crescendo, a sense of deja vu was pervasive. No one knows for certain whether history will repeat itself once again this November.

But we do know this: In the first general election since the inauguration of President Trump, nearly one-third of the top two vote-receiving candidates across all statewide, federal, and legislative races in California are women. That’s still a long way from gender parity. But it’s a higher percentage than any other California election this century.

As goes California, so goes the nation—with some exceptions.

According to data collected by Center for American Women and Politics at Rutgers University, a record number of women are running for state and federal office this year—with a lopsided share running as Democrats.

In California, some races have attracted more women than others. Across the state, one-third of congressional candidates who made it past the primary are women. That’s slightly higher than the national average. But in the general election finals for statewide office—jobs from governor to insurance commissioner—California women are woefully underrepresented despite the state’s egalitarian rep.

We analyzed data going back to 2002, the first year for which election results are published in an easily usable format by the California Secretary of State’s office. 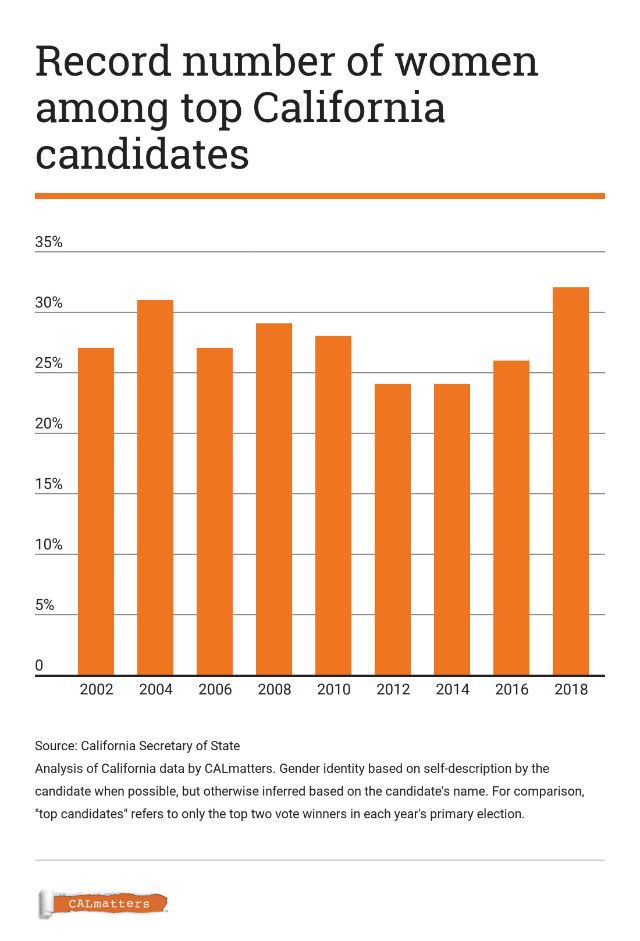 Mirroring the national trend, the surge of women who are running this year lean more Democratic than male candidates. In keeping with previous years, 7 out of every 10 women on the 2018 ballot are Democrats, while men are split roughly 50-50 between the two major parties.

Political insiders are predicting that more women on the ballot this year will lead women to turn out to the polls in droves this November. That’s to say nothing of the galvanizing effect of Judge Kavanaugh and Christine Blasey Ford; #MeToo and #WeSaidEnough; Bill Cosby, Harvey Weinstein, women’s marches and two years into the tenure of a president whom California women disapprove of by a gaping 34 percentage point margin.

According to the Target Book Insider Track Survey, which queries the consultants, lobbyists and political players who shape California politics from both sides of the aisle, 73 percent of respondents said they expect women to be the demographic group with the largest bump in turnout this year.