If you want to know who’s who in San Diego politics, you can find the answers in the bank accounts of two county supervisor candidates.

Become a supporter
[one_half][box type=”shadow this-matters”]Many different sources of money can back a politician’s run for office. By knowing where that money is coming from, voters can learn about the priorities and connections of candidates on the ballot.[/box][/one_half]

Republican Bonnie Dumanis and Democrat Nathan Fletcher are competing in November to replace Supervisor Ron Roberts, who is termed out after more than 20 years on the San Diego County Board of Supervisors.

His district, which covers most of central San Diego, now contains two Democrats for every Republican. The five-member board is made up entirely of Republicans, and Democrats see this race as a chance to have a voice in county government.

“The Dumanis-Fletcher race is in the purplest of the districts,” said Carl Luna, political science professor at San Diego Mesa College. “That’s what has set this up to be the battle royale between the two parties.”

It’s why current and former politicians in San Diego — along with politicians from around the state — have been loading up on Dumanis and Fletcher since they made it through the June 5 primary.

Another competitor in the 49th District, Democrat Doug Applegate, gave Fletcher $800. Applegate was an early frontrunner in the race, but he finished fourth.

Fletcher is a former assemblyman — he was a Republican at the time — and his wife is Democratic Assemblywoman Lorena Gonzalez Fletcher.

“Nathan Fletcher has an advantage,” Luna said. “He’s now part of the Democratic power couple, so that curries favor with a lot of the other people who work with his spouse up in Sacramento.” 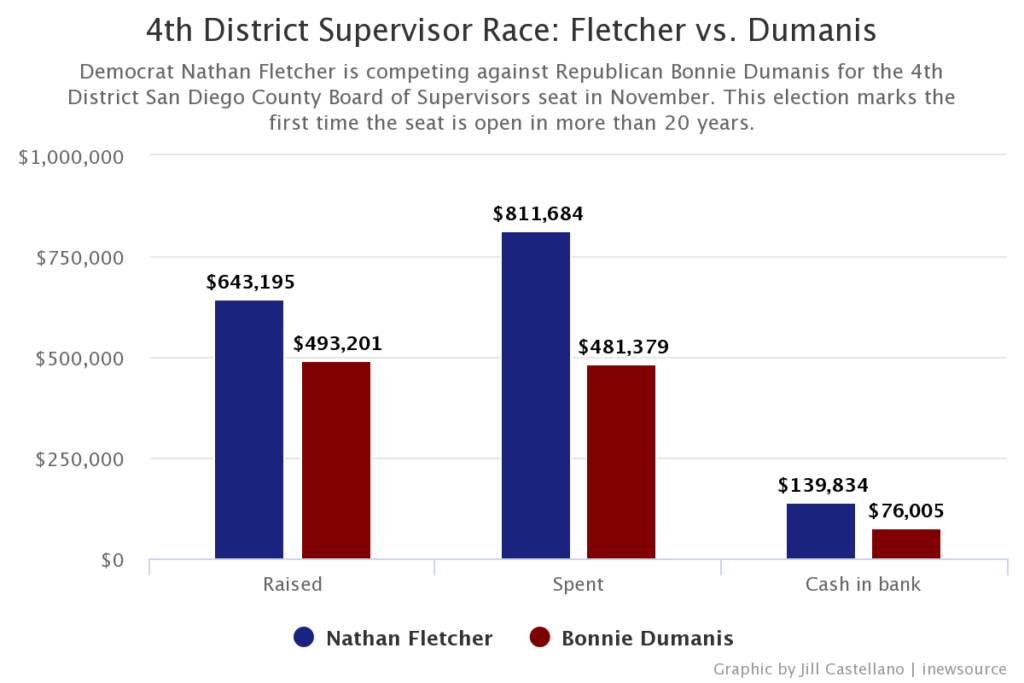 Fletcher’s biggest financial resource has been the San Diego County Democratic Party. It donated $25,000 to his general election campaign on July 2, which is close to the party’s donation limit. It spent another $939,000 on Fletcher through “member communications,” a strategy used by political parties to spend unlimited amounts of money supporting candidates.

An inewsource analysis last month showed that because of member communications, Fletcher has received more financial support this decade than any other candidate in San Diego County has from either county political party. His wife has been the largest donor to either party this year, contributing three times more than anyone else.

Fletcher told inewsource in July the support from the Democratic Party reflects how important the race is.

“Before I entered this race, the Democratic Party took a vote to deem it strategically critical, and to identify it as one of their highest priorities,” he said. “And there’s tremendous energy and enthusiasm and commitment to electing a Democrat to the Board of Supervisors.”

Other groups have gotten involved in the supervisor’s race by spending their own money to support and oppose the candidates. The race has seen unprecedented outside spending by these political action committees, which pumped more than $1.2 million into the primary election. They can spend unlimited sums of money as long as they don’t coordinate with the candidates’ campaigns.

Dumanis and Fletcher have so far raised a combined $1.1 million on the campaign.

In addition to Democrats having a significant majority in the 4th District, another challenge for Dumanis is that 74 percent of the voters in the primary cast ballots for a Democrat in the supervisor race. She was the only Republican in the the five-candidate contest.

Fletcher also has more money backing him. He has spent almost double what Dumanis has, and he still has about twice as much money in the bank, as of June 30.

“I’m going to be out walking precincts, talking to people,” Dumanis told inewsource in July about her campaign strategy. “I want to know what’s important to them and how to address that.”

During that time, Fletcher’s campaign was using its money to fight attack ads. The Republican-leaning Lincoln Club of San Diego County used a PAC to spend $275,000 opposing Fletcher in those two weeks.

Luna said part of the reason for the volume of spending is that no other local races this November are nearly as important or as contested.

“If you want to spend money in San Diego, this is the place to bet on,” he said. “And neither party wants to get caught short on that.”

The other county supervisor race this year is to replace termed-out Supervisor Bill Horn, and the Republican candidate has a strong financial advantage in the North County district.

Gomez, a legislative analyst, has been behind in fundraising since the beginning — she didn’t start raising money until April and is a relatively unknown figure in local politics. She has raised $18,000, while Desmond, the mayor of San Marcos, has raised $393,000. 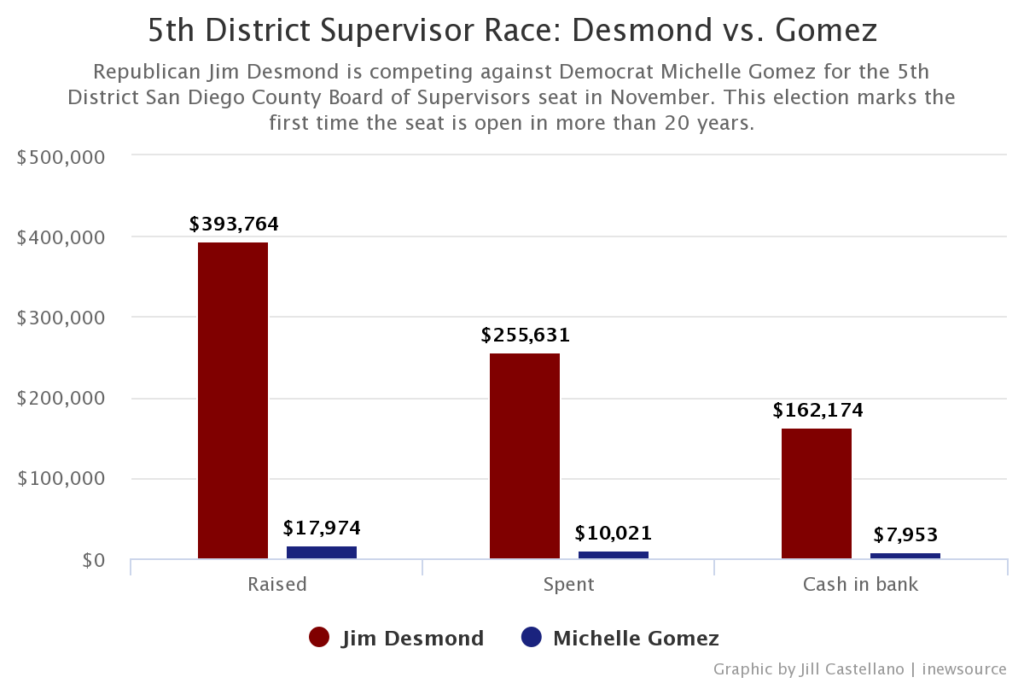 Among Desmond’s donors are executives from Sudberry Properties, a real estate firm that has spent at least $1 million opposing the SoccerCity stadium development in San Diego.

Neither candidate has spent much so far. In the two weeks before the primary, Desmond spent $6,000 on consulting and Gomez spent $625 to text and call voters.

In the four-candidate contest, Desmond received 45 percent of the primary vote and Gomez 23 percent. Republicans outnumber Democrats in the 5th District, but Gomez managed to beat out the better-known third-place finisher, Oceanside Councilman Jerry Kern, a Republican.

“It was a divided Republican field that allowed her to come in second place,” Luna said. “In November, you’re probably going to see a strong enough Republican turnout just not to make it that exciting a race, which is why the money’s not flowing into it.”