San Diego Councilman David Alvarez is barred by term limits from running for re-election this year, but he’s not done with local politics.

Alvarez has already raised a little more than $119,000 for a bid in 2020 to replace county Supervisor Greg Cox — more than some supervisor candidates running this year have raised.

Alvarez, a Democrat, announced in January 2017 that he would run for the seat Republican Cox has held since 1995. The councilman said he started campaigning early because of the size of Cox’s South County district. It includes parts of San Diego, as well as Coronado, Chula Vista, National City and Imperial Beach. About 633,000 people live in the district.

“And so you really need to get out there soon so that people get to know you and get to judge you, and get to decide whether they like you or they don’t,” said Alvarez, who ran for San Diego mayor and lost to Kevin Faulconer in 2014.

Brian Adams, a San Diego State University political science professor, said Alvarez may be using a common tactic to try to clear the field for his run.

“If you raise a lot of money early, you build up this big war chest, you’ll scare off other potential candidates,” Adams said. 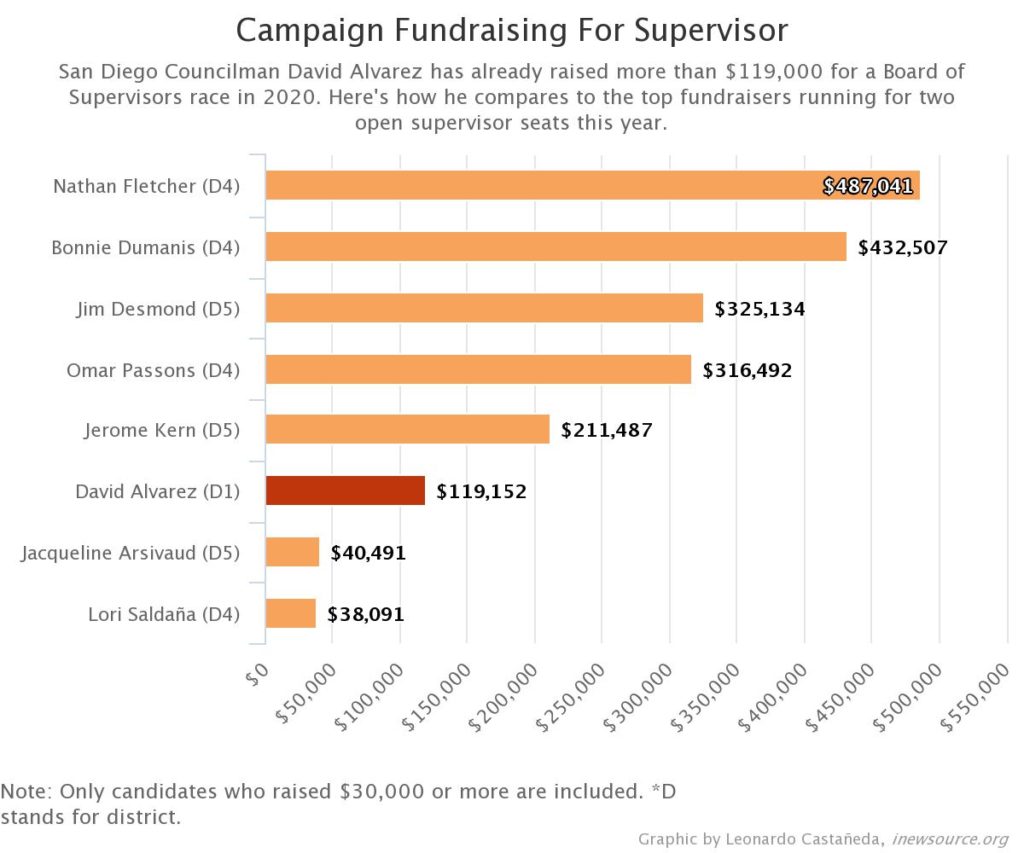 Despite Alvarez’s head start, the seat will be tempting for others, particularly Democrats. When Cox is termed out in 2020, it’ll be the first time his seat has been open in 25 years. The district has twice as many registered Democrats as Republicans.

So far, no one else is officially running for Cox’s seat. One name that has been mentioned as a possible contender is state Sen. Ben Hueso, a former assemblyman and San Diego councilman whose current district includes much of the area served by Cox.

For now, Hueso said, he is focused on winning re-election this year. He has raised more than $340,000 for that race in which he has one opponent, a retired judge who has raised less than $10,000.

The senator wouldn’t rule out running for county supervisor.

“You never know what happens in politics,” he said. “I never planned to be on the Senate, but I’m here and it was, again, people in my community asking me to run.”

Alvarez said he doesn’t think his early campaign cash will stop other candidates from running for Cox’s seat.

“I don’t expect this to be easy at all, and it shouldn’t be,” said Alvarez, who also is running this year for a seat on the San Diego Community College District board. He’s filed paperwork that he doesn’t intend to raise more than $2,000 for that campaign.

Adams said he doubts Alvarez’s strategy of fundraising early for the supervisor’s seat will eliminate all challengers.

San Diego County Democratic Party Chairwoman Jessica Hayes said possible contenders should start campaigning early. And if they can avoid an expensive primary with a lot of candidates attacking each other, even better, she said.

“My preference is for Democratic candidates not to hit at each other,” Hayes said. “That’s not always possible.”

Alvarez’s early donors include some well-known Democrats. Among them are fellow council members Barbara Bry and Chris Ward. Lawrence Hess, owner of San Diego real estate company Lehbros Ltd., and his wife, Suzanne, each gave Alvarez $1,600. Both have supported Democrats in the past.

But he also has received donations from Republican backers, including Thomas Sudberry, chairman of Sudberry Properties, and real estate investor David Malcolm.

Alvarez said although he does not agree with Sudberry and Malcolm on many issues, he thinks their support of him is because of one area of agreement: “I really believe that we need to build more housing, and I think we see eye to eye on that.”

“The other thing to keep in mind is that donors can give to more than one candidate in a race, and they do all the time,” Adams said. “Tom Sudberry may be giving to Alvarez now. Next year, there may be a Republican running, and Sudberry may decide to give to that Republican, too.”