The U.S. Supreme Court has yet to weigh in on a high-profile case that could slash the power of public-employee unions. But California labor leaders are already planning to push for new state laws to blunt the impact of an unfavorable ruling.

The case argued before the court Monday, Janus v. American Federation of State, County and Municipal Employees, challenges whether public-employee unions can collect fees from workers who choose not to join the union. California is one of several states that allow unions to collect so-called “fair share fees” from workers who benefit from services such as contract negotiations but don’t want to pay for their union’s political activity.

Plaintiff Mark Janus, a state child support specialist in Illinois, contends that all union activity is political when the workers’ boss is the government. He argues that requiring him to pay the fee infringes on his constitutional rights to free speech and association by essentially forcing him to support a group that advocates positions with which he disagrees—in particular, its push for boosting worker salaries in a state facing a budget crisis after reportedly mismanaging its pension program.

AFSCME, the nation’s largest union for government workers, argues that without the fees workers would get a “free ride,” enjoying job protections the union secures without paying the associated cost. In a friend-of-the-court brief on behalf of California, the state’s Democratic Attorney General Xavier Becerra argues that changing the status quo would unnecessarily disrupt California’s dealings with its public-employee unions.

The court is likely to rule this spring, and given its conservative majority, many observers expect the unions to lose. That would slash the amount of money public-employee unions can collect from their workers—and, over time, could shrink membership. Those changes would shake up politics in California, where organized labor has long enjoyed enormous clout in a state dominated by Democrats. The Janus case is backed by a network of conservative groups whose funders also support Republican candidates.

“The threat to organized labor is a threat to all of us, in particular to the Democratic party,” Alma Hernandez, executive director of the Service Employees International Union in California, said to a roomful of union activists at the California Democratic Party convention. The mood was a mix of doom and defiance.

“And make no mistake about it, brothers and sisters, they’re coming after us.”

Predicting they will lose in the courthouse, California union leaders have begun fighting back in the statehouse. Last year, they successfully lobbied for a new state law that requires government workers, upon being hired, to go through an orientation session with union representatives.

“That is going to be a great boost to allow us to at least access the people and ask them to join,” said Dave Low, executive director of the California School Employees Association.

“Once Janus is decided, and we feel very much that it is going to be decided against us, we will be moving other legislation.”

The legislation is in early conceptual stages and it’s too soon to say whether, if approved, it would cover all unions or just those in the public sector. But union-backed bills under consideration, Low said, include:

Taxpayer advocates would likely oppose bills that would shield contact information or give union members release time from work, said Jon Coupal, president of the Howard Jarvis Taxpayers Association. But overall, he said, a court ruling in favor of Janus could relieve some pressure on California taxpayers.

“It will perhaps result in our elected officials being able to pursue policies that have more the public in mind, and not just the public employees,” Coupal said. “They will be less likely to cave to public employees in collective bargaining in terms of salary and compensation.” 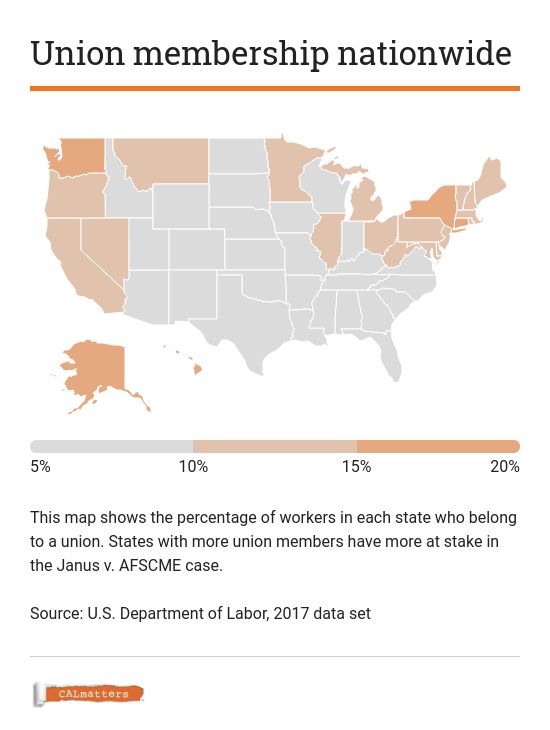 Labor unions are a major influence in California’s Capitol, spending money to help elect Democrats and then lobbying them to pass new laws. In just the past few years, unions here have successfully advocated for laws granting overtime to farmworkers, making paid sick days mandatory and increasing the state’s minimum wage to $15 an hour. Labor has shaped many other decisions in the Capitol, from which car companies can get electric-vehicle rebates to how much money school districts can hold in reserves.

That kind of influence is costly. Labor unions spent at least $16.3 million lobbying the California Legislature last year and, according to the National Institute on Money in State Politics, more than $123 million on California political campaigns in the last election cycle—money that comes from dues paid by union members.

About 2.5 million public- and private-sector workers in California are union members, according to the California Labor Federation, and another 110,000 government workers here pay fair-share fees to unions they choose not to join.

An unfavorable ruling from the Supreme Court could diminish union membership in California by between 5 and 30 percent, depending on what other laws are in place, predicted California Labor Federation spokesman Steve Smith. It’s unlikely to strike an immediate blow to how much unions spend on political campaigns in California this year, he said, though it could have some impact. The real change will be felt over time: If the ruling leads to a decline in membership, unions will have less money to spend on politics.

“We will all have to look at our budgets and say, ‘What is it that we absolutely are going to spend money on, and what are we not going to be able to do any more?’ ”

California Unions Prepare to Lose in the Courthouse and Strike Back in the Statehouse was last modified: March 4th, 2018 by Editor