With Congress ending the requirement that all Americans have health insurance, California leaders are preparing to counter that move by securing health care for as many residents as possible in a fortified state insurance exchange.

State lawmakers say they will present a package of health-related proposals in the coming weeks, before a Feb. 16 deadline for new bill introductions. Details are still developing, but officials and health care advocates say discussions focus on ways to maintain the exchange’s high enrollment and help still more Californians obtain insurance.

“Everything they are doing at the federal level, we are doing the opposite,” said state Sen. Ed Hernandez, an Azusa Democrat who chairs the Senate Committee on Health and plans to host a bill-pitching session next week.

The outcome may or may not include a state version of the mandate the federal government repealed, effective next year.

“What drives individuals to purchase on the exchange is the marketing, but also the subsidies and the health care,” Hernandez said. “We are looking at every option.”

Across the country, states that created their own exchanges like California did are similarly engaged. Maryland lawmakers, for example, are trying to adopt a mandate that residents have health insurance or pay a penalty. Alternatively, the equivalent of the penalty could be used as a kind of downpayment on a health care plan.

The federal penalty for those without insurance goes away at the end of this year. It was imposed as part of the Affordable Care Act to ensure that most Americans signed up for health care, including the young and healthy who would give the exchanges a good balance of individuals and offset costs for those older and less healthy.

Republicans in Congress argued that removing the federal mandate allows families to choose for themselves whether to buy insurance and saves the federal government money because fewer subsidies will be required.

President Donald Trump, in tweets encouraging Congress to act, called the mandate “very unfair and unpopular.” The government’s savings, he said, could be used for “Tax Cuts for the Middle Class.”

Trump’s administration had already limited the latest enrollment period for the federal exchange and gutted the marketing budget that provided information about how to sign up.

California has been working to keep its exchange, called Covered California, strong. Its current marketing efforts include a television ad campaign emphasizing that anybody’s health can change in an instant. The ads show people in accidents—falling off a ladder while putting up holiday lights, slipping on toys left on a staircase.

Covered California is spending $111 million on marketing and outreach in hopes that the number of enrollees for 2018 will continue to climb as the sign-up period nears its Jan. 31 end. That expenditure is up from $99 million during last year’s enrollment period.

In the first month of the current sign-up period, enrollment was up 28 percent over the same period last year, according to Covered California, with more than 100,000 new enrollees and 1.2 million renewals. 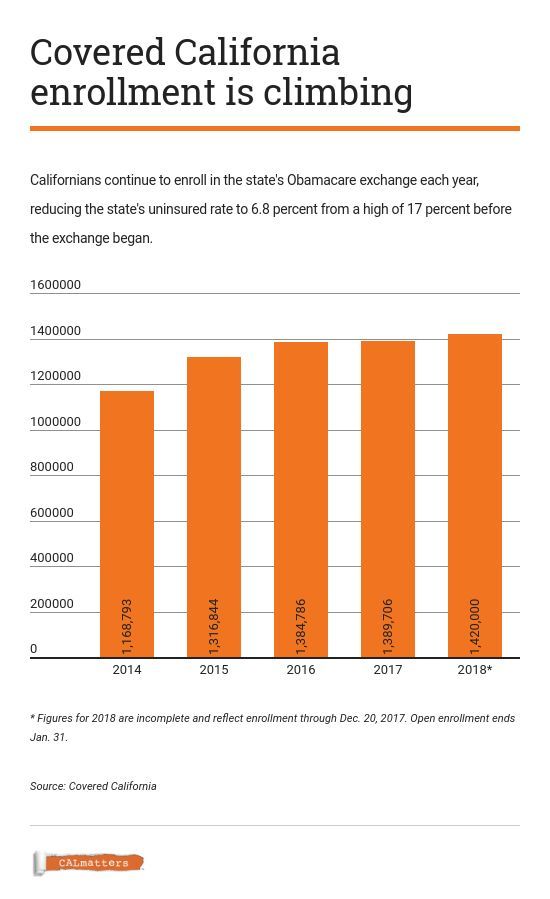 California already has one of the lowest rates of uninsured in the nation, at 6.8 percent, down from 17 percent in 2013, according to the federal Centers for Disease Control and Prevention.

“We are actively marketing, we are supportive in the Legislature, we have a significant increase in enrollment,” said Hernandez. “We are doing things right, and I want to make sure we stay on that trajectory.”

An individual insurance requirement is an important way to keep Californians in the exchange, said Anthony Wright, executive director of Health Access California, which advocates for consumers.

“What can we do … at the state level so they don’t leave people in the lurch or destabilize the overall market?” Wright said. “The individual requirement piece is part of that mix.”

The penalties collected could be used to lower the cost of Covered California insurance, Wright said. But “we’d prefer more people sign up than pay a penalty.”

Without the mandate, which Congress repealed as part of the recent tax overhaul, some worry that healthy people, the young or those who opt not to pay for insurance could drop out of the system.

And last month, Peter Lee, executive director of Covered California, told the board of directors that the effect of a penalty reduces the cost of care for the uninsured in emergency rooms, in addition to other benefits like the bigger risk pool for insurers.

Wright and other health care advocates want more. They’re urging legislators to combat the Trump administration with a bigger arsenal, including the extension of subsidies to families that don’t currently qualify and further expansion of Medi-Cal, the state’s health care system for the needy.

Hernandez agreed that more families deserve assistance but was doubtful that more subsidies would be made available in the near term, despite the state’s full coffers.

“I would love to do some kind of state subsidy,” he said. But with all the demands on the state budget, “I’m a realist as well.”

California May Buck Congress With Its Own Health Insurance Requirement was last modified: January 21st, 2018 by Editor