White House Chief of Staff John Kelly presented a more moderate vision this week for a U.S.-Mexico border wall than the one President Donald Trump had pledged during his 2016 campaign.

On Wednesday, Gen. Kelly told members of the Congressional Hispanic Caucus that some of Trump’s campaign immigration policies were “uninformed.” The country won’t build a wall along the entire southern border and it won’t be paid for by Mexico, Kelly told lawmakers according to the Washington Post.

Later that day, Kelly told Fox News the president’s position has evolved on what he wants for a wall.

“There’s been an evolutionary process that this president has gone through,” Kelly said.

The president himself weighed in, via Twitter, on Thursday morning, saying the wall “has never changed or evolved.” He added that there never was a plan to build a wall where natural barriers already exist, and suggested a $20 billion price tag — paid for by Mexico — for the wall.

The Wall is the Wall, it has never changed or evolved from the first day I conceived of it. Parts will be, of necessity, see through and it was never intended to be built in areas where there is natural protection such as mountains, wastelands or tough rivers or water…..

….The Wall will be paid for, directly or indirectly, or through longer term reimbursement, by Mexico, which has a ridiculous $71 billion dollar trade surplus with the U.S. The $20 billion dollar Wall is “peanuts” compared to what Mexico makes from the U.S. NAFTA is a bad joke!

In November, inewsource and KPBS produced “America’s Wall,” a special report that detailed the U.S.-Mexico border wall and its impact on illegal immigration.

In light of the comments this week by Kelly and Trump, we decided to revisit “America’s Wall” and share what we know about the U.S-Mexico border, what effect fencing has had on illegal entry into the U.S., and what it would take to expand the wall.

How much wall is there now?

There are 653 miles of fencing along the 1,954-mile border that stretches from California to Texas. That includes 353 miles of wall mainly intended to stop people on foot, 181 miles of permanent vehicle barriers and 119 miles of temporary vehicle barriers.

Most of that barrier is fairly new — 90 percent was built since 2005 by Republican President George W. Bush and Democratic President Barack Obama.

About 37 miles of that border wall also has a secondary barrier as a backup. Primarily used in urban border areas such as San Diego, a second barrier creates a kind of no man’s land that is easier for Border Patrol agents to patrol and spot individuals entering the country illegally. 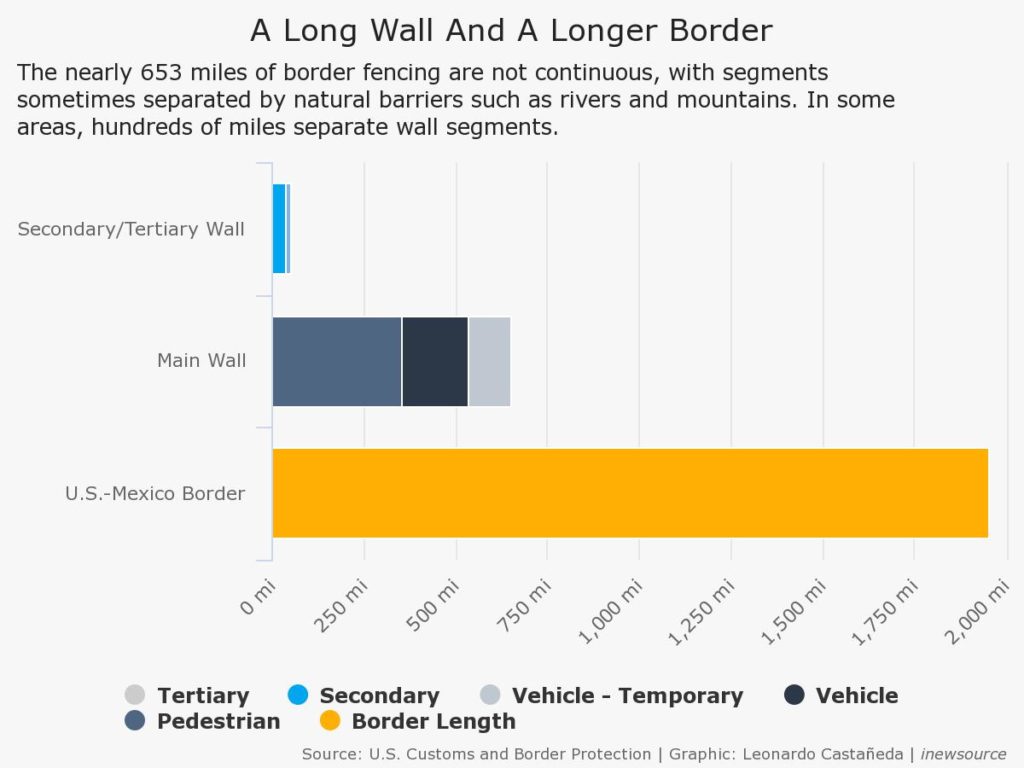 That’s a lot of border without a wall. Which parts of the border are fenced?

Most of the current wall — about 82 percent — is in California, Arizona and New Mexico. Texas, which has the greatest share of the border with Mexico, has the fewest miles of fencing.

In heavily fenced California, there are few gaps between barriers. That’s not the case in Texas, where hundreds of miles separate sections of the wall. 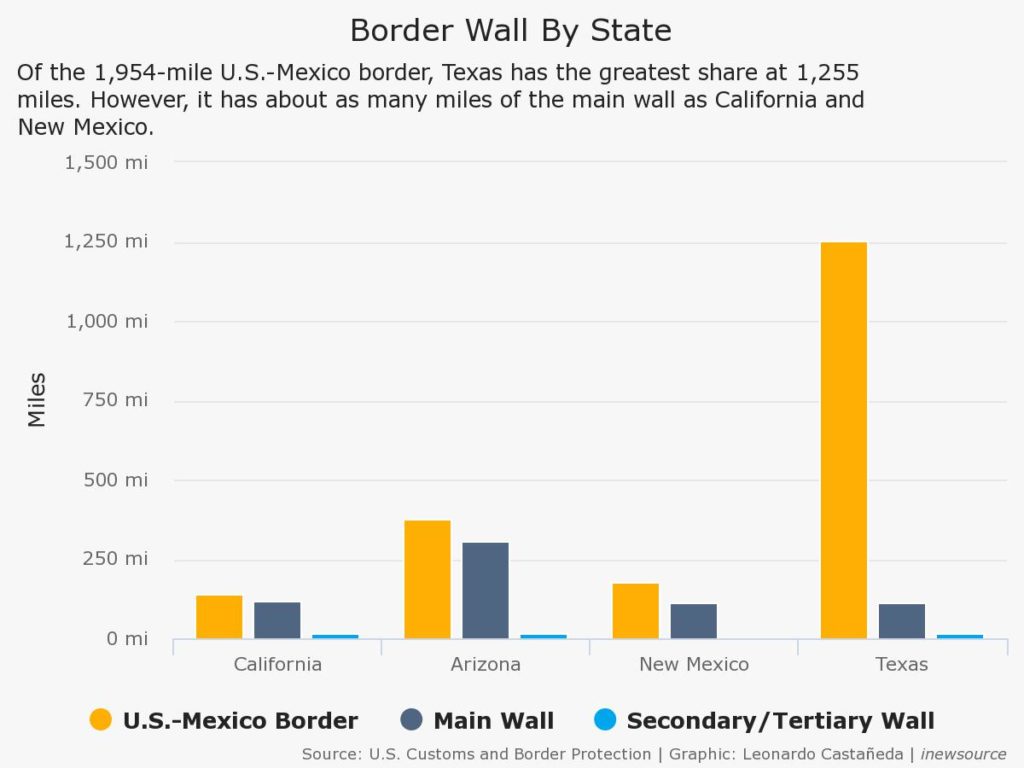 What do we know about what the administration wants to build?

Earlier this month, the Wall Street Journal reported that U.S. Customs and Border Protection was asking Congress for $18 billion over 10 years for wall construction. The money would pay for 316 miles of new wall and the reconstruction of 407 miles of existing barriers.

That construction boom would overshadow the 570 miles built from 2006 to 2009 following the 2006 Secure Fence Act, which called for hundreds of miles of double-layered fencing including in eastern California, Arizona and eastern Texas.

Assuming that all of the 316 miles of new wall is primary fencing, rather than new secondary backup barriers, that would bring the wall to 969 miles, about half the length of the U.S.-Mexico border. It’s also slightly more than the 700- to 900-mile wall Trump had suggested this past July.

Do we know how the wall might impact illegal immigration?

Using data obtained by inewsource and KPBS through a Freedom of Information Act request, we analyzed the impact of illegal entry into the U.S. along different sections of the border as new fencing was built. We found that generally wherever new fencing was built, illegal immigration declined.

However, illegal immigration didn’t stop. Immigrants determined to illegally enter the U.S. just moved their routes to less fortified sections of the border. For example, in the early 1990s, nearly 70 percent of immigrants detained for illegally entering the country were stopped in the San Diego and El Paso border sectors. Starting in 1994 enforcement actions and new wall construction made those areas less attractive border crossers and detentions plummeted. 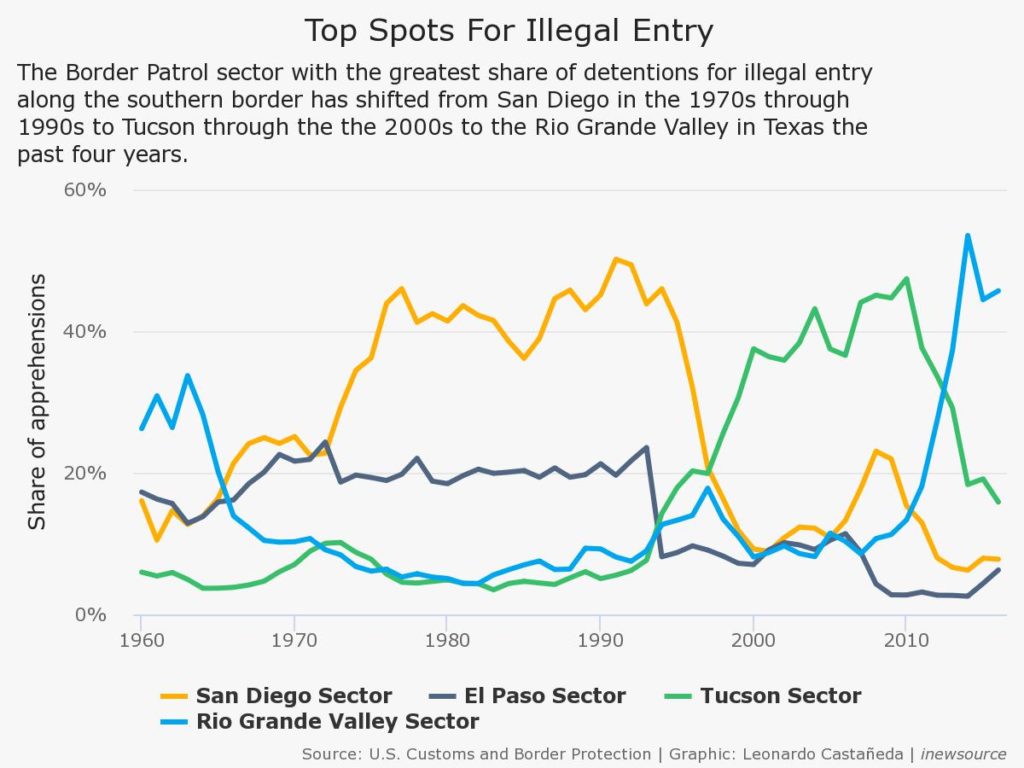 Why not fence the entire border then?

In fiscal 2017, the Rio Grande Valley border sector in eastern Texas had 45 percent of the apprehensions for illegal entry, the highest share along the southwestern border. That would seem to make Texas a likely candidate for more wall construction.

However, property disputes, the snaking Rio Grande river and other natural barriers make Texas one of the most challenging parts of the country to fence.

Even where there’s fencing, smugglers — particularly those in drug cartels — have found ways to circumvent the wall using tunnels and even drones.

And declining apprehensions along the border have made some question the need for a wall. This past fiscal year the Border Patrol detained 303,916 people trying to enter the country illegally at the southern border. That’s the lowest number since 1971.

The Reality of The Border Wall in The Wake of Gen. Kelly’s Comments was last modified: January 20th, 2018 by inewsource