Beyond the devastation and personal tragedy of the fires that have ravaged California in recent months, another disaster looms: an alarming uptick in unhealthy air and the sudden release of the carbon dioxide that drives climate change.

As millions of acres burn in a cycle of longer and more intense fire seasons, the extensive efforts of industry and regulators to protect the environment can be partly undone in one firestorm. In particular, as raging blazes pump more carbon into the atmosphere, state officials are grappling with the potential effect on California’s ability to adequately reduce greenhouse gas emissions.

The state’s environmental regulations are known to be stringent, but they have limits: They apply only to human-caused emissions. Carbon and other pollution generated by wildfires is outside the grasp of state law.

“The kinds of fires we’re seeing now generate millions of tons of GHG emissions. This is significant,” said Dave Clegern, a spokesman for the state Air Resources Board, a regulatory body.

In less than one week, for example, October’s wine-country fires discharged harmful emissions equal to that of every car, truck and big rig on the state’s roads in a year. The calculations from the subsequent fires in Southern California are not yet available, but given the duration and scope of the multiple blazes, the more recent complex of fires could well exceed that level.

The greenhouse gases released when forests burn not only do immediate harm, discharging carbon dioxide and other planet-warming gases, but also continue to inflict damage long after the fires are put out. In a state where emissions from nearly every industry are tightly regulated, if wildfires were treated like other carbon emitters, Mother Nature would be castigated, fined and shut down.

The air board estimates that between 2001 and 2010, wildfires generated approximately 120 million tons of carbon. But Clegern said a direct comparison with regulated emissions is difficult, in part because of limited monitoring data.

“Nature doesn’t follow the rules very well,” said Jim Branham, Executive Officer at the Sierra Nevada Conservancy, a state agency that has created a plan to better harness California’s forests in reducing carbon in the atmosphere. 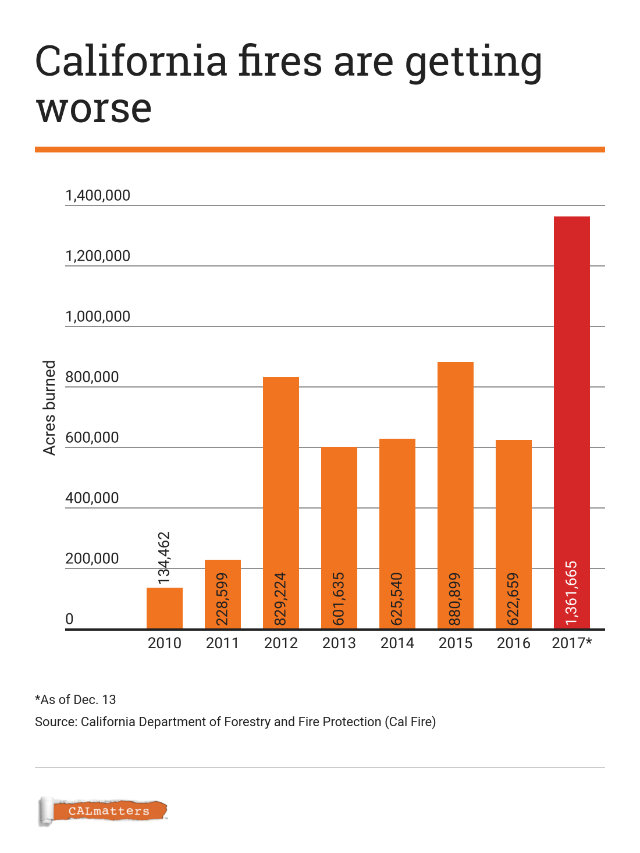 As is so often the case in environmental catastrophes, one thing leads to another, creating what Branham calls the double whammy: Burning trees not only release powerful pollutants known as black carbon, but once a forest is gone, its prodigious ability to absorb carbon from the atmosphere and store it is lost, too.

Scientists estimate that in severely burned areas, only a fraction of a scorched tree’s emissions are released during the fire, perhaps as little as 15 percent. The bulk of greenhouse gases are released over months and years as the plant dies and decomposes.

And if a burned-out forest is replaced by chaparral or brush, that landscape loses more than 90 percent of its capacity to take in and retain carbon, according to the Conservancy.

Severe fires have the capacity to inflict profound damage in a short span. The U.S. Forest Service estimates that the 2013 Rim Fire in central California spewed out the equivalent of the carbon dioxide emissions from 3 million cars. That is a setback to the state’s effort to get cars off the road, another critical tool for reducing greenhouse gases.

The role of wildfire as a major source of pollution was identified a decade ago, when a study conducted by the National Center for Atmospheric Research concluded that “a severe fire season lasting only one or two months can release as much carbon as the annual emissions from the entire transportation or energy sector of an individual state.”

It’s a measure of the dramatic ramping up of fires in the West that today a single fire can meet that threshold.

The entire equation has been made worse by the state’s epidemic of tree death, caused by drought, disease and insect infestation. The U.S. Forest Service this week updated its estimate of dead trees across California to 129 million. That loss alone could be a blow to the state’s vision of a low-carbon future.

Forests as carbon-chewers are part of the state’s strategy for cutting greenhouse-gas emissions significantly by 2020 and beyond—a goal that could be undermined by nature’s caprice. The air board will direct state agencies to determine more precisely how much carbon can be absorbed by California’s variety of landscapes.

Air quality, too, is subject to state, as well as local and federal, regulations. But those standards go out the window in large fires, when soot and ash blanketing entire regions can be seen from space.

California has invoked the rule during wildfires at least once before, in 2008, for fires in the Sacramento area. The request was accepted, according to the air board.

More recently, Sean Raffuse, an analyst at the Air Quality Research Center at the University of California, Davis, came up with the “back of the envelope” calculations for October’s Sonoma County fires.

Raffuse said he used federal emissions inventories from fires and calculated that five days of ashy spew from the northern California blazes equated to the annual air pollution from every vehicle in California.

Those kinds of computations are seldom replicated, largely for lack of the necessary instruments present at fire sites. But things are changing. Researchers have been attempting to better understand the full range of environmental damage wrought by wildfires. One tool is drones that can be flown through smoke plumes to collect samples for analysis.

“We don’t have the means to measure emissions from a wildfire like we do from a tailpipe,” Branham said. “We are lagging well behind in understanding and having hard data of the effects of these fires. And most of the data are chasing reality.”