Michael Steelman perches at the edge of the Sacramento River, skipping rocks across the clear water. His dad’s Harley Davidson, borrowed for the excursion, is parked nearby.

In this popular Shasta County park, Steelman finds solace nearly every day, sitting, walking, skateboarding, thinking. The California native left his wife and two children in Georgia nearly four months ago, taking shelter with his parents to face an addiction to painkillers after 11 years of taking the opioid drugs for a neck injury.

Now, after stopping those drugs and starting addiction treatment in July, the 41-year-old sees a future.

Addiction “cost me a lot,” Steelman said. “I’m going through a divorce now, and I don’t have contact with my kids right now. It’s rough. But I know I’m doing the right thing. I’m staying sober.”

Steelman is benefiting from a year-old treatment program, the brainchild of a local physician who belongs to a coalition supported by federal, state and nonprofit funds. But he might easily have been among the tens of thousands of Americans dying each year of opioid overdoses, as prescriptions once reserved for cancer pain and end-of-life care have burgeoned and addiction and abuses have skyrocketed. Nearly half of those deaths were from overdoses of prescribed drugs such as Norco and Oxycodone, according to federal statistics.

The opioid crisis has not gripped California in the same way it has other states. Overdose deaths peaked in 2009 and have since dropped 15 percent, according to health officials. Still, nearly 4,100 people were hospitalized for overdoses in the state last year. Nearly 2,000 people died. According to the California Department of Public Health, 70 percent of the deaths involved prescription opioids. And there remain several hot spots of addiction, mostly in rural California counties. In addition, deaths from street heroin, often a cheaper alternative for those whose addiction begins with costly pills, have risen 57 percent since 2012, according to the state.

In 2014, California authorities began working on the issue after a challenge from the national Association of State and Territorial Health Officials, said Karen Smith, director of the state Department of Public Health. The state had been tracking drug deaths for years, and officials could see where problem pockets were developing.

More than $50 million in federal grants, some extending through 2019, have helped California improve data collection and toxicology testing, upgrade the prescription monitoring system, support counties’ anti-opioid efforts and establish a hub-and-spoke system to bring medical treatment to those who need it.

In addition, state health officials have partnered with the California Health Care Foundation, a nonprofit advocacy group, to help the local groups educate patients and doctors, learn effective addiction treatments and provide other services. It takes a village.

“We have a tendency to want to simplify things,” Smith said. “This isn’t one of those problems.”

Last year, the volume of prescribed opioids in California fell 12 percent, and there was a bump of 7 percent in the number of people receiving medications that treat addiction, according to state data. Recently enacted state laws allow the overdose antidote naloxone (Narcan) to be sold without a prescription. And last year the Legislature and governor provided $3 million for the distribution of naxalone to communities that need it. Some law enforcement agencies equip their officers with Narcan, and schools are allowed to stock it on campuses.

But despite the improvements, San Francisco County had 92 overdose deaths last year and Orange County, 277. Giant Los Angeles County, with 327, had one of the lowest opioid death rates in the state. Remote Humboldt and Inyo counties had the highest. Humboldt, with 136,000 people, had 33 deaths; three died in tiny Inyo, where the population is a mere 19,000. Shasta County lost 16 of its 179,000 people to opioid overdoses last year. 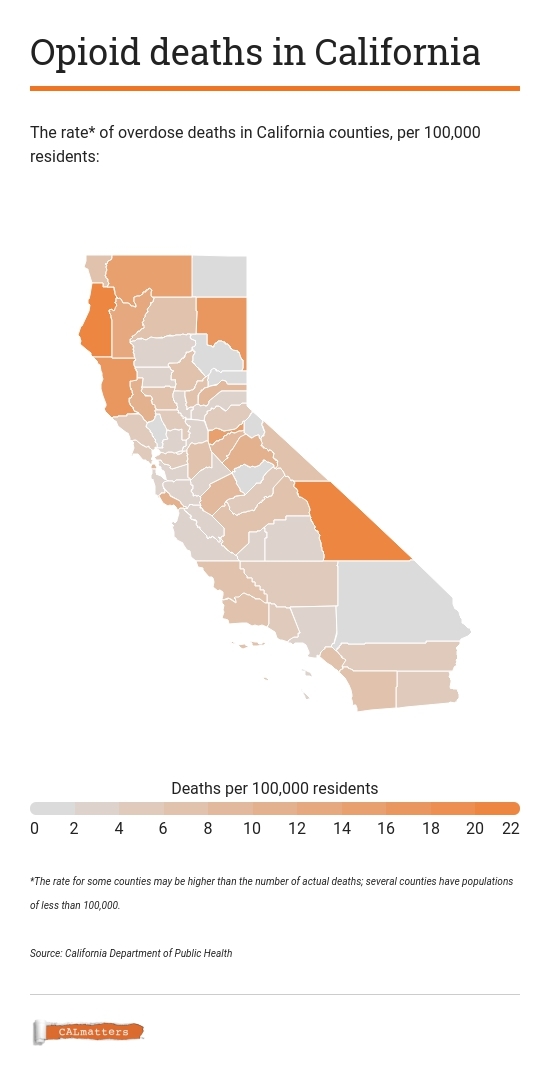 The small, hard-hit counties are largely white. Experts say people of color have had less access to health care and, therefore, to doctors prescribing opioids. The doctors they do see, studies have shown, may judge them differently and withhold such drugs.

For example, “if a patient is black, the doctor is more concerned about the possibility of the patient getting addicted or maybe more concerned the patient is going to sell their pills,” Andrew Kolodny, co-director of opioid policy research at the Heller School for Social Policy and Management at Brandeis University, said in an address last year to California officials and others involved in addressing the opioid problem. “If the patient is white, they are prescribing as if there is nothing to be worried about.”

Compounding the issue in rural areas that the economic recovery didn’t reach is a lack of jobs and a feeling of hopelessness. A passionate doctor named Candy Stockton calls opioid addiction “an epidemic of despair.”

Stockton, who gave up family practice to focus on treatment of drug addiction, works in Redding, the seat of Shasta County, where unemployment in August was 6 percent—higher than in either the state or the nation, according to the state’s Employment Development Department. The region, about 150 miles north of Sacramento, is a nature-lover’s paradise, home to majestic Mount Shasta and to Lassen Peak, the southernmost active volcano in the western U.S. Shasta County also has California’s highest rate of babies born addicted to drugs, including opioids, the latest state data show.

“This is happening in areas where the economy is devastated, where the jobs used to exist like timber, mining, factory-type work,” said Stockton, a member of the state-supported NoRxAbuse Coalition, a local group of physicians, law enforcement officials, substance-abuse treatment centers and community advocates. People here “have worked in jobs that are physically abusive….They’ve become injured, but they can’t recover to the point of going back to do those jobs, and there are no resources to train them to do things that are less physically demanding. There is no future and no incentive to get better.”

Once a week, Stockton and fellow physician Doug McMullin conduct addiction treatment at the Shasta Community Health Center where they practice. On a recent weekday, Stockton, who directs the treatment program, popped into an exam room to talk to 44-year-old Benjamin, who asked that we not use his full name for privacy reasons. He sat at the edge of an adjustable bed while Stockton talked to him from a rolling stool.

“Any slip-ups this week, any problems with cravings, withdrawal symptoms?” the doctor asked.

“No, everything has been really cool,” said Benjamin, who had been on opioids for more than two decades, starting with one Vicodin a friend gave him when he was 22.

First it was a party drug. Then he wanted it for aches and pains or when he wasn’t feeling great. Eventually, he found someone who worked in a pharmacy and sold him the pills under the counter.

“It’s insidious,” he said. “Before you know it, you’re shooting up heroin.” He spent about half of his addicted years on prescription drugs and the rest on heroin. “I lost myself,” he said.

“Our goal is not to keep you captive in our office for the rest of your life,” Stockton told him. “It’s to help you get back to as normal function as you can have.”

Stockton, who talks rapid-fire and is constantly in teaching mode with her patients and staff, has also made it her mission to educate fellow doctors on the dangers of over-prescribing—something Steelman felt acutely. His relationship with pills had begun after he fell off a ladder while working as a plumber. He landed on his head, compressing his neck and back. Instead of surgery, he was given painkillers. Eventually, his doctor took away his prescription because he was taking too many pills—about 30 a day. Steelman then turned to the black market to buy them.

“The thing I don’t understand is that doctors push this stuff on you, they say it’s the best solution,” Steelman said. “And then when you get to that point–‘Hey, Doc, something’s not right, I’m taking more than I’m supposed to’—they cut you off.”

Kelly Pfeifer, a doctor and the leader of the California Health Care Foundation’s efforts against opioid addiction, asks medical providers to acknowledge their role in creating the problem. “I’m a physician who was called by the coroner because my name was on the bottle in the hands of a dead girl,” she said. “We can’t take the entire responsibility, but we were a big part of it and we have to own up to the responsibility.”

There’s been good news in Shasta County: overall declines in the number of opioid prescriptions, in the strength of the prescribed drugs and in opioid-related deaths. Last year Shasta had 16 such deaths, down from 20 in 2014 and from 27 in 2008, according to the county health department.

Prescriptions for buprenorphine, which helps patients come off other opioids by stabilizing brain chemistry, are up 30 percent since 2014. A cornerstone of the NoRxAbuse program is helping local physicians pay for the federal waiver application needed before they are allowed to prescribe the drug for addiction treatment.

Some lawmakers say that at the state level, more needs to be done. Assemblyman Jim Wood, a Healdsburg Democrat, has called for the Department of Public Health to create a group to establish standards for prescribing opioid drugs. Gov. Jerry Brown recently vetoed his proposal, noting that the state already has a workgroup.

Democratic Sen. Anthony Portantino of Pasadena introduced an unsuccessful bill this year that would have created guidelines for the prescribing of opioids to minors, favoring non-addictive pain relief. It died in committee for lack of detail.

Portantino came to the issue after a woman told him through tears that her son had died of a heroin overdose; his addiction started with prescription opioids to treat a soccer injury. Later, Portantino’s daughter, then 14, suffered her own soccer injury. He gave her Tylenol and ibuprofen in place of the opioids her doctor prescribed, the senator said in an interview.

“We should be regulating so that it’s not the first choice” except for hospice care or severe injuries, he said. “I definitely think we need to do more….”We’ve got to go at it from multiple angles.”

He said he would push his bill again in January.

In the meantime, the Redding physicians chip away at the problem. McMullin leads a backpack group that fans out once a week to check on the homeless, many of whom battle addiction, and pass out naloxone to anyone who asks for it. He also helps with the “Hope” van, a vehicle the size of an RV with two exam rooms and space for a medical assistant to check patients in. Every day, the rolling clinic, usually equipped with Narcan, parks somewhere in Redding to serve the homeless, offering them coffee and snacks as they wait to be seen.

Back at the river, Steelman reflected on his ordeal.

He had spent hundreds of dollars—one month more than $1,000—buying painkillers illicitly. “I couldn’t do that anymore,” he said.

Today, Stockton and her team are his support system, Steelman says. “They actually care, and they ask how you are doing….They will actually listen to you.”