Half the state’s households struggle to afford the roof over their heads. Homeownership—once a staple of the California dream—is at its lowest rate since World War II. Nearly 70 percent of poor Californians see the majority of their paychecks go immediately to escalating rents.

This month, state lawmakers are debating a long-delayed housing package. Here’s what you need to know about the scope of one of California’s most vexing issues:

Just how hard is it to buy a home in California?

Hard. Really hard. Both compared to how hard it is in other states, and how hard it was for previous generations of Californians to buy homes.

While it’s always been more expensive to be a homeowner in California, the gap between us and the rest of the country has grown into a chasm. The median California home is now priced 2.5 times higher than the median national home. As of 2015, the typical California home costs $437,000, easily beating the likes of Massachusetts or New York (only Hawaii had more expensive houses).

Despite relatively low mortgage rates, exploding housing prices have caused California’s homeownership rate to dip significantly. Just over half of California households own their homes—the third lowest rate in the country, and the lowest rate within the state since World War II.

Rents didn’t dip during the recession, and now are soaring

Rental costs across the state are some of the highest in the country. While listed housing prices dipped dramatically in the wake of the Great Recession, rents in California remained relatively stable before soaring in recent years in hot markets.

Across the state, the median rental price for a two-bedroom apartment is about $2,400, the third highest in the country. But statewide figures water down how absurd the situation is getting in urban coastal markets, where the vast majority of Californians live. The median rent for a two-bedroom apartment in San Francisco reached more than $4,000 this year.

“It may cost more to live here, but they pay you more”

That’s somewhat true—median earnings for Californians are higher than the national average, and are significantly higher in certain regions like the Bay Area with tremendously pricey costs of living.

But on average, income over the past two decades has not kept pace with escalating rents.

The problem here is not just housing. Income inequality and wage stagnation in California also hinder low and moderate-income households’ ability to pay for a home.

But in certain markets, even extremely high incomes aren’t enough to blunt the cost of housing. In San Jose, where the current median income is nearly $100,000, renters can still expect to pay 40 percent of their monthly income on rent, according to an analysis by the real estate data firm Zillow. 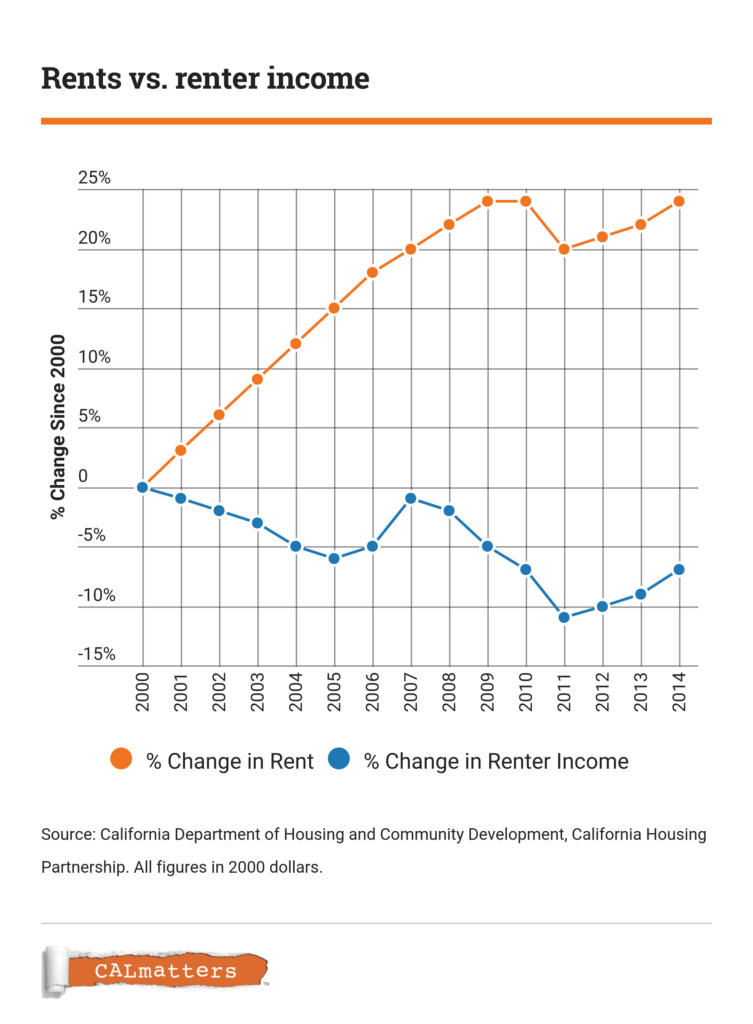 Cities are being gentrified—as is the entire state

It’s difficult to measure things like “gentrification” and “displacement”—when the arrival of higher-income, higher-educated residents in a community results in the expulsion of longtime lower-income residents. But there’s little question change is happening rapidly across many California cities.

Researchers at UC Berkeley found that more than half of low-income households in the Bay Area are at risk of, or already experiencing, gentrification. It’s not just lower-income communities bleeding households—higher-income neighborhoods are losing their lower-income members as well. And in places like the Boyle Heights neighborhood of Los Angeles, gentrification protests have exposed escalating tensions between longtime Latino residents and new, predominantly white arrivals.

Where are these low-income people going? Increasingly, out of state.

From 2000 to 2015, the state lost nearly 800,000 residents with incomes near or below the poverty line. Nearly three-quarters of those who left California since 2007 made less than $50,000 annually. The leading destination for California’s poor? Texas.

Housing costs are just one factor in the complex tangle of reasons people become homeless. California actually has fewer people experiencing homeless now than it did a decade ago. But there’s little question rising rents are linked to more  Californians living in cars, shelters, and on the streets—especially in the greater L.A. area.

Recent numbers from Los Angeles County, where the number of people experiencing homelessness grew 30 percent over the past two years, have prompted cries for more eviction protections and rent control. Zillow recently estimated that a 5 percent increase in rent would result in an additional 2,000 homeless Los Angelinos. In 2016 rents grew an average of 4 percent there.

Nearly a decade removed from the depths of the Great Recession, and 38 percent of California’s 18 to 34-year-olds still live with their parents, according to U.S. Census data. That’s roughly 3.6 million people—more than the entire population of Chicago.

Again, housing costs are not the only thing keeping junior from moving out. Student debt loads, disappearing labor markets, and delaying marriage are also contributing to the trend. We’ve seen no thorough analysis yet on how California’s abundant avocado toast supply may be keeping millennials confined to their nests.

The extremes of the state’s housing crisis are concentrated in the Bay Area and greater Los Angeles, but the challenge is truly statewide. A widely-cited reportby the consulting firm McKinsey Global Institute found that in every metropolitan area in the state—from Fresno to Palmdale to Salinas—at least 30 percent of residents could not afford local rents.

The intense pressures of housing costs in coastal urban centers are spilling into inland cities. While San Diego, San Francisco and L.A. top the list of toughest rental markets in the country, cities like Sacramento and Riverside recently have experienced the largest year-over-year increases.

The housing crisis has major repercussions for the economy

The McKinsey Global Institute found that housing shortages cost the economy between $143 billion and $233 billion annually, not taking into account second-order costs to health, education and the environment. Much of that is due to households spending too much of their incomes on the rent or mortgage and not enough on consumer goods.

Even the attractive salaries and lavish perks of Silicon Valley struggle to overcome the local housing market, as young tech talent flees to the relatively inexpensive climes of Austin or Portland. Nearly 60 percent of Los Angeles companies in a recent University of Southern California survey said the region’s high cost of living was affecting employee retention.

It won’t be getting better anytime soon

The state estimates that it needs to build 180,000 homes annually just to keep up with projected population growth and keep prices from escalating further out of control.

Unfortunately, for the past 10 years, the state has averaged less than half of that. In no year during that span did California crack the 100,000 barrier.

There’s fierce debate over how long it takes low-income residents to benefit from the construction of new market-rate housing—a renter on the wait list for housing vouchers won’t take much comfort in the luxury condos being built in downtown Oakland or Los Angeles. While California faces an affordable housing gap at nearly all but the highest income levels, the low-income housing shortage is most severe.

According to the nonpartisan Legislative Analyst’s Office, helping just the 1.7 million poorest Californians afford homes would cost $15 to $30 billion a year. The Los Angeles Times estimated that the three marquee bills considered by lawmakers this month would provide less than 25 percent of that total.

This is an excerpt of the project “Californians: Here’s why your housing costs are so high.” For the full report, go to calmatters.org. CALmatters is a nonprofit, nonpartisan media venture explaining California policies and politics.

California’s Housing Crisis—It’s Even Worse Than You Think was last modified: August 27th, 2017 by Editor