These are the conditions that detainees face inside one of southern California’s largest immigration detention facilities, according to a report this month by federal inspectors who visited the Theo Lacy Facility, an 11-acre jail complex run by the Orange County Sheriff’s Department.

For the past seven years, the U.S. Immigration and Customs Enforcement has been renting bed space there. The county sheriff’s office collects roughly $30 million annually for leasing out the high-security real estate, and in exchange, ICE gets bunk space for roughly 480 of the more than 40,000 undocumented immigrants nationwide that the agency has been keeping behind bars on any given day.

The contract is an arrangement of convenience for a county in need of revenue and a federal government in need of jail beds.

The county disputes the critical inspection report from the Homeland Security Department’s Office of Inspector General. Sheriff Sandra Hutchens says that while “some legitimate issues were identified…and were quickly addressed,” many of the inspection’s findings were inaccurate, as was the subsequent “sensational” media coverage which provided “a misleading ‘Shawshank-like’ picture of Orange County jail facilities.”

Regardless, the news comes at a bad time for the Orange County Sheriff’s Department—and for all defenders of business-as-usual across the patchwork of county jails, city lockups, and privately-owned facilities across California that make up the state’s immigration detention system.

For state Sen. Ricardo Lara—whose immigration detention reform bill won the Legislature’s approval last year only to be vetoed by Gov. Jerry Brown—the inspection report provides a well-timed “I told you so.” And so Lara, a Democrat from Bell Gardens, is back again this session with Senate Bill 29, which would set new rules for immigration detention facilities and would ban local governments from contracting with private prison companies to detain immigrants. On Tuesday it cleared the Senate Judiciary Committee. 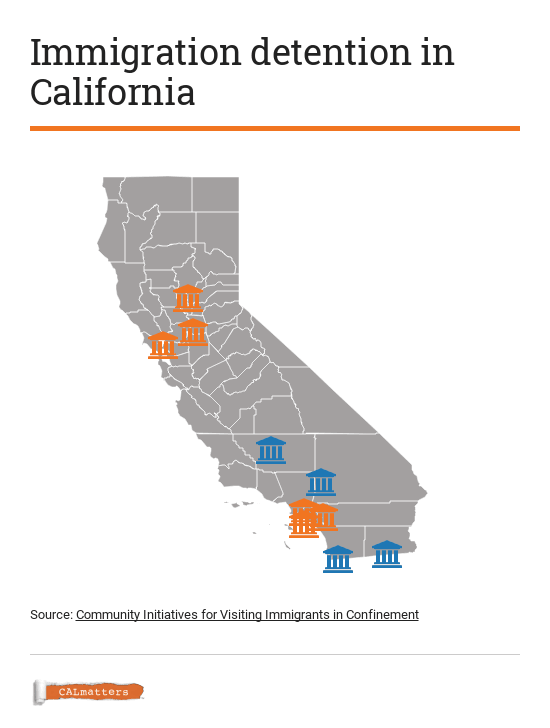 While the state already regulates all detention facilities in California, Lara and other supporters of the bill argue that the national detention standards articulated in every ICE detention contract are not being followed. This bill would not require the Board of State and Community Corrections, the agency that regulates California prisons and jails, to conduct additional inspections or adopt new rules. Instead, the bill aims to keep immigration facilities in line by allowing both current and former detainees and the state Attorney General to sue any facilities that violate these standards.

But the bill also has sharp detractors among law enforcement agencies and many Republicans, who believe that claims of mismanaged detention facilities are overblown. They also argue that the state shouldn’t interfere with local law enforcement decisions, and that Lara’s bill could have unintended, harmful consequences for local budgets—and even for the detainees themselves.

“Sacramento thinks it’s so smart and has to mandate things to everybody,” says GOP state Sen. John Moorlach, who represents Orange County and used to chair its board of supervisors. “I don’t think that’s good policy in this case, and I think being uncooperative with a federal agency is arrogance at its highest.”

The ultimate fate of Lara’s bill may rest again on the governor. With his first veto, Brown wrote that although he was troubled by reports of conditions at privately run facilities, he wanted to wait for a “more permanent solution” from the federal government. (The Obama administration had announced plans to phase out contracts between the U.S. Bureau of Prisons and private prison corporations, and to reconsider its use of private immigration detention facilities. The Trump administration is moving in the opposite direction.)

Although the U.S. immigration detention program is the largest single incarceration system in the country, its facilities are often leased. Of the 10 long-term immigration detention facilities in California, none are federally owned: five are county jails, one is a city facility, and the remaining four are owned and operated by for-profit companies. Using data from public records requests and publicly available documents, interviews and site visits, the immigration rights group Community Initiatives for Visiting Immigrants in Confinement estimates that privately-run jails make up 75 percent of all the bed space across California’s long-term immigration detention system.

Some of those incarcerated in this system have past criminal records, but immigration violations themselves are civil rather than criminal matters—and so detainees in immigration court entitled to court-appointed legal counsel. Awaiting their hearings or deportation, detainees may spend weeks, months, or in rare cases years, in custody.

With President Trump making aggressive immigration enforcement a cornerstone of his presidency, ICE will probably need all the beds it can get.

Since his election, the stock prices of GEO Group and CoreCivic, the country’s two largest private prison and immigration detention operators, have increased by 87 percent and 125 percent, respectively.

“If there’s going to be a spike in detention in a relatively short period of time, recent history shows that the only way the government can actually detain those people is if private prisons provide the beds,” says Anita Sinha, an assistant professor of immigration and civil rights law at American University.

Not in California, if SB 29 prevails.

“For-profit facilities are inherently problematic because they are incentivized to hold as many people as possible with the lowest standards in the cheapest manner allowed by law in order to maximize profits,” Lara said.

The bill would not interfere with existing contracts—nor with arrangements like the one between ICE and CoreCivic, which owns and operates the Otay Mesa facility in San Diego. But for the handful of California towns that act as middleman between ICE and private detention companies, SB 29 would mean the end of a potentially important source of revenue.

More than any other locality in the state, this describes Adelanto. Straddling a two-lane freight route 45 miles north of San Bernardino, the town used to be known for orchards and an Air Force base. Now the local industry is incarceration. Adelanto hosts three jails and prisons, with two more in the works.

Among the existing lockups is the privately operated Adelanto Detention Facility, which exclusively houses ICE detainees and is the largest immigration detention center in the state. Though it’s owned by GEO Group, which purchased the facility from the city for $28 million in 2011, the City of Adelanto still holds the ICE contract and receives $1 per day per bed in “mitigation fees.” That puts a little under $1 million per year toward a $40 million budget. Between that facility and a nearby private jail, GEO Group hires roughly 100 locals in a city with a population of roughly 30,000 and a poverty rate of 40 percent.

But the facility has been a focal point of protest for immigrant rights activists. Since the Adelanto facility re-opened under GEO ownership in 2011, four ICE detainees in its custody have died,  including a Nicaraguan immigrant who died this week in what authorities said was a suicide.  After the death of Raul Ernesto Morales-Ramos in 2015, who died after surgery for colon cancer that went undiagnosed for much of his time behind bars, a federal investigation censured the facility for shoddy record keeping, months-long delays in medical care, and medical personnel with minimal expertise and unsuitable training.