“Like many of you, I’ve been alarmed to hear President Trump’s rhetoric on immigration,” said the seven-term Congresswoman.

She said San Diego benefits economically from its immigrants and proximity to the Mexican border. “We know how fortunate we are to live in a diverse community,” she said. 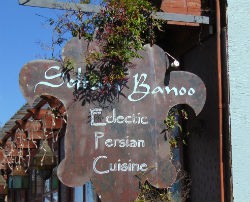 The event took place outside Pemberley Realty and the Sultan Banoo restaurant, businesses started by a family that immigrated from Iran in 1988.

“We are proud to be part of San Diego,” said Realtor Roxanne Govari. Her mother, Mahin Mofazeli, described America as the land of opportunity and pointed out that her restaurant employs 15 people.

“I work hard, and I pay pretty well the people who work for me,” Mofazeli said.

Mark Cafferty, president and CEO of the San Diego Regional Economic Development Corporation, said the business community “large and small” needs to speak out about the importance of immigration to innovation.

Paola Avila of the San Diego Regional Chamber of Commerce noted that half of the Fortune 500 companies were started by immigrants or the children of immigrants. San Diego, she said has a “strong tradition of immigrant entrepreneurs.”