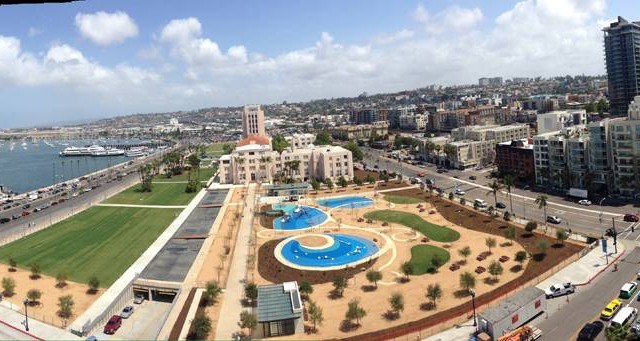 The county of San Diego should include the downtown Waterfront Park in its drought management plans to set a better example for the public, according to a county grand jury report released Tuesday.

The grand jury commended the county government for its response to the drought overall, but said the park “consumes copious amounts of potable water” for its fountains and lawns.

The park opened nearly three years ago outside the County Administration Center and has served as a signature gathering place for the public, particularly families with children. The facility also hosts numerous special events.

According to the grand jury, the county adopted a drought response plan in 2015 and reduced water use at nearly all of its locations, except for a few “critical” recreation facilities — of which the Waterfront Park was one.

The report said the county received a waiver from the city of San Diego Public Utilities Department that allows for enough irrigation to keep the expansive lawns green. However, it’s unknown how much water the park actually uses, since it’s on the same water meter as the County Administration Center’s air conditioning system.

The grand jury recommended that the county:

— include the park in the drought response plan in a way that reduces the operating hours of the fountain system and turns off the fountains when not in use for recreation;

— invoke the plan whenever the city declares a water emergency that restricts residential water consumption and ornamental fountain operation;

— develop a means to measure fountain water consumption at the park so that conservation actions can be tracked; and

— create a public recreational usage profile of the fountain system to allow plans to be established during declared water emergencies and for normal conservation.

“The Waterfront Park has been used year-round by nearly three-quarters of a million visitors since opening in 2014,” county spokesman Michael Workman said. “It is a featured crown jewel on San Diego’s waterfront. Much like Balboa Park and other parks in the region, the Waterfront Park serves as an important tourist and regional destination.”

The county has until May 1 to file an official response to the report, which was issued five days after the San Diego County Water Authority Board of Directors declared that drought conditions in the region were over.