Taking the trolley to the San Diego Comic-Con might be the worst kept secret for avoiding stop-and-go downtown traffic and high parking fees.

But how big of a boost is Comic-Con for San Diego Metropolitan Transit System ridership numbers? MTS spokesman Rob Schupp said special events are a huge draw, and the annual comic book and culture convention is the biggest of them all.

Last July saw the largest monthly total of trolley riders of 2015, more than 3.6 million. The Green Line alone, which has downtown stops at the Convention Center and Seaport Village, had more than 1.1 million riders that month.

“You see enormous differences in how packed those cars are during those peak event periods,” Parent said.

July might have been last year’s ridership superhero, but it was more Ant Man than Superman. An inewsource analysis of trolley ridership found that July, August, September and October all had higher numbers of passengers than the monthly average.

From 2013 through 2015, July wasn’t even the best average month for ridership on the Green Line. That honor goes to October, which had almost 20 percent more riders than an average month during that time.

Even last July, the ridership champ in a year when Comic-Con passes sold out in an hour, the Green Line only had about 31,000 more riders than September, the second best month. 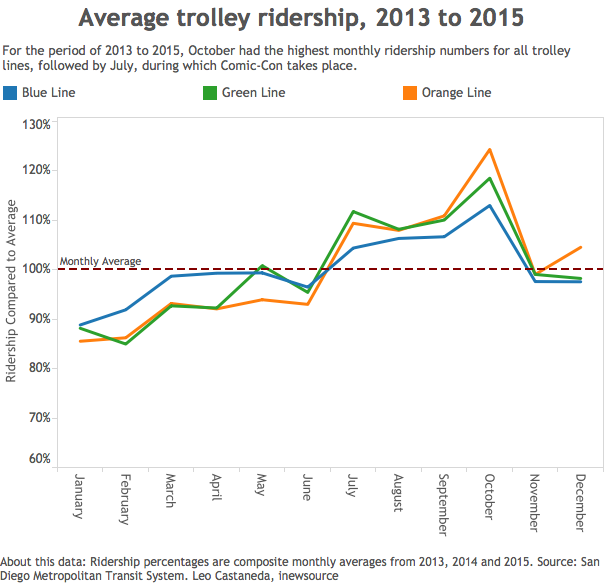 “The overwhelming majority of people who ride transit are people who are commuters,” he said.

On a regular weekday, 125,000 riders use the MTS trolley system, which can make the additional thousands for events such as Comic-Con “just a drop in the bucket of total everyday ridership,” Parent said.

Ridership numbers also tend to stay up year-round because there’s hardly a dry season for downtown. Every year MTS adjusts its services for 250 to 280 special events, Schupp said.

“That’s the great thing about San Diego. You’ve got all of these activities year-round,” he said.

That includes everything from baseball games at Petco Park to the Rock ‘n’ Roll Marathon in June. About 20 percent to 30 percent of ticket holders get to Chargers games by trolley, Schupp said.

July’s additional trolley riders could also be balanced out to some degree by people who might decide to stay home and avoid the crowds on certain days. Schupp, however, doesn’t worry too much about people staying away.

“I think big events by far attract more people than they cause people to stay home,” he said. “The net effect is a plus on special events.”

For Parent, even if the overall numbers aren’t a blockbuster, Comic-Con is still a valuable promotion for the trolley.

“It’s a great opportunity to introduce people to being a transit rider,” he said. He hopes future developments from MTS, such as adding stored value to Compass Card passes or buying tickets on a cellphone, might make that transition even easier.

For those taking the trolley for the first time to Comic-Con this week, he offers some perspective. Riders don’t usually have to jostle for elbow room with Wookiees or share handholds with Klingons.

“If they take the trolley on a different week, they can rest assured it won’t be nearly as crowded and sweaty as sometimes it can get during Comic-Con,” Parent said.