Beginning Wednesday, windsurfing is allowed for the general public on Lake Hodges for the first time in a decade.

Board sailing enthusiasts were able to use the lake between San Diego and Escondido for 15 years, but were stopped in 2003 because of construction of a pump station. Only the San Diego Windsurfing Association was able to use the lake during part of that time, and that was only for special circumstances, according to San Diego City Councilman Mark Kersey’s office. 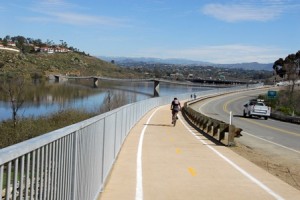 The work was completed in 2010, in the midst of the city’s fiscal crisis, and the activity was never re-authorized, Kersey said.

“I am pleased we’re bringing windsurfing back to Lake Hodges for local enthusiasts and others to enjoy,” said Kersey, who represents the Rancho Bernardo neighborhoods on the southern side of the lake. “Our reservoirs are an integral part of our water management system but I believe they should also serve as a recreational asset for our communities.”

Lake Hodges is the only city reservoir where windsurfing is allowed. The activity is authorized during the lake’s normal recreational schedule of Wednesdays, Saturdays and Sundays.

New rules require the use of personal floatation devices, inspection of quagga mussels and the signing of a personal liability waiver.

Kersey’s office said the city of San Diego coordinates with the state Department of Public Health to ensure all activities that could impact the reservoir’s water quality are evaluated and that proper measures are in place to protect water quality. The city also has to consider and meet local, state and federal accessibility, environmental security and safety concerns.

Fishing boats and float tubes are also allowed on the lake, but stand-up paddleboards are not permitted.