Home » Opinion » Opinion: Dave Rubin, Rethinking Politics, and The Importance of Talking to Each Other

Here is the question of the day:  Can we talk to each other — in person and on social media?

Shouldn’t we talk about the values that define our country, about the laws that regulate our lives, and the way our taxes are spent?

Enter Dave Rubin, the author of Don’t Burn This Book. He’s a cheeky conversationalist who has come out of two closets, suffering more for coming out as a classical liberal than for being gay.

Rubin had his own radio show on the center-left/progressive media platform The Young Turks, but he has since abandoned that media platform because of his willingness to challenge his own understanding on hot topic issues from abortion to immigration to racism. Is that personal fact-finding quest sufficient to unfriend, isolate, ban, ostracize or otherwise Twitter-burn Rubin or his book?

If we lived in a social vacuum, we’d probably say, “That’s fine. He’s entitled to think what he wants.”

But we don’t live in a vacuum.

One survey by the Public Religion Research Institute found that Democratic women were most likely to block friends on social media. More generally, “nearly one-quarter (24%) of Democrats say they blocked, unfriended, or stopped following someone on social media after the election because of their political posts on social media. Fewer than one in ten Republicans (9%) and independents (9%) report eliminating people from their social media circle.”

So, there’s our trigger warning to social media reality. If you are likely to unfriend Dave for his adventure into rethinking and to speaking up about it, now is the time to stop reading this essay. You have been warned.

Rubin recalled his interview with Thomas Sowell and with Sowell’s turning away from being a far left Marxist into becoming a modern day conservative.

“He’s one of my favorite moments in interviewing. I asked him what caused his change of heart from being a Marxist. He had the most perfect pause before saying, ‘Facts.’”

Rubin sees the opportunity to go on a fact-finding adventure as “a much bigger problem on the left these days than it is on the right. Generally, the right is better on this in looking at empirical evidence. For example in the area of race relations:

‘Where is the crime? Is there a racial crime? What is it?’ If there is a problem, the right will say, ‘OK, let’s look at policy and address that.’ The left has given up altogether looking at facts altogether. Generally they just run with a narrative. The left is obsessed with the color of your skin. There’s a constant narrative they push, ‘You’re a racist, you’re xenophobic, you’re homophobic, you’re a Nazi.’ These are crazy overstatements. There really is no significant racism in the United States today. That narrative is really in direct conflict with looking at the facts; and facts come into conflict with their worldview.” 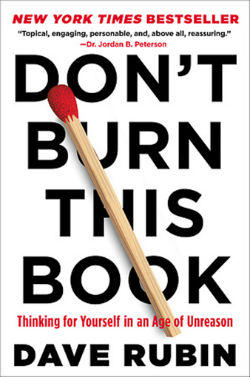 Of course, one could ask whether Rubin’s worldview is fact-based. Shelby Steele, another African-American social theorist, is an interesting voice in talking about race and where we are today.

“The oppression of black Americans is over with. Yes, there are exceptions. Racism won’t go away — it is endemic to the human condition, just like stupidity. But the older form of oppression is gone … Before it was a question of black unity and protest; no more, it is now up to us as individuals to get ahead. Our problem now is not racism, our problem is freedom.”

Rubin’s discussion is not focused on race. That is just one of the many issues that percolate in society. He explores many of them in his book. This is Rubin’s travelogue in working his way from a center-left paradigm into a classical liberal one — what some would label “conservative.”

Put another way, our mindsets are a house of cards. That’s our narrative or paradigm. Once we stumble over facts that pull away cards at too many places in our house of cards, the house falls. We need to rebuild our house, rebuild our narrative, our paradigm that incorporates more firmly based facts, sometimes just more of the facts. That’s what Thomas Sowell did, what Shelby Steele did and what Dave Rubin does. That’s what makes his book interesting.

So, is there any advice that Rubin would give us in how we might find a more open framework to talk to each other and across the partisan divide? To talk with those we might call the “Other.”

“Be a little bit better — a little bit more willing to turn the other cheek; be willing to listen calmly than those who are rushing to judge. I would give the same advice to both sides, but the left is more demanding to believe all of the things that they believe. Slowly try to show them the truth, even if they scorn you for it. Respect is important, and generally respecting differences is more likely on the right than it is on the left.”

I am more combative than Rubin, having been a litigator. But I can see the path to much needed talk with each other about how to understand our society as well as the broader human condition. The place to start the talk is to avoid the symbols of Donald Trump and Nancy Pelosi, to avoid the divergent narratives of left and right, and to focus instead on you and me and the facts that we think we know and the facts that we ought to know.

Joe Nalven is a former associate director of the Institute for Regional Studies of the Californias at San Diego State University.

Opinion: Dave Rubin, Rethinking Politics, and The Importance of Talking to Each Other was last modified: May 26th, 2020 by Editor