Amazing news: the California State University faculty are getting a raise! Approximately 10 percent by July 2017. Seems that the faculty have won a terrific victory. After all, the CSU initially offered a paltry 2 percent (try offering that for a tip at a good restaurant). Because, as Chancellor Timothy White repeatedly claimed, there was just not enough money in the system to offer more. “We have to live within our means,” he said at CSU East Bay.

But do CSU administrators “live within their means”? The San Diego Union-Tribune recently published a graphic illustrating the gap between the campus president’s salary and the average full professor. As expected, there’s quite a spread. San Diego State University’s Elliot Hirshman leads the pack: $420,240, housing provided. The average salary for a full professor, on the other hand, is $97,688. The president makes about four times the salary of the top professors.

Easy to get angry over the gap, but that would be wrong for two reasons. First, four hundred thousand is actually a relatively low salary for a university president. More importantly, presidential salaries distract from the real outrage, which is that administrators at the chancellor’s office and at the various campuses get very significant raises every year while the faculty get next to nothing. 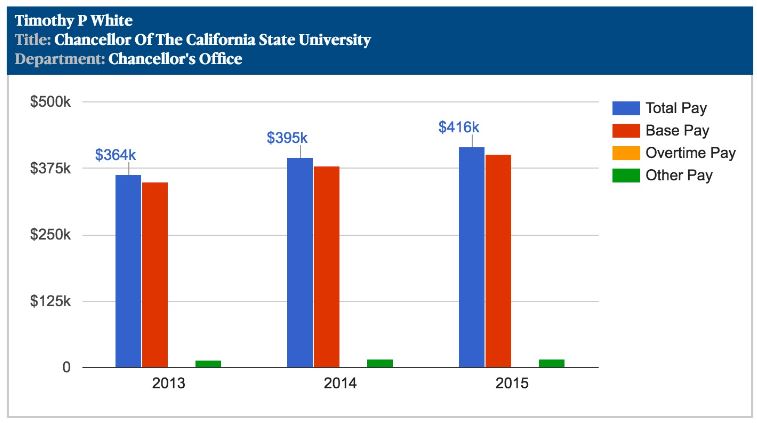 At the same time White tells the faculty that he can give them only a nominal raise, his salary has gone way up. Two years ago, he got a thirty thousand dollar raise; last year, twenty thousand dollars. Other administrators who work at aptly named Golden Shore Drive have also done quite well.  Since 2011, the salary paid G. Andrew Jones, the associate vice chancellor and deputy general counsel, just keeps getting higher and higher: 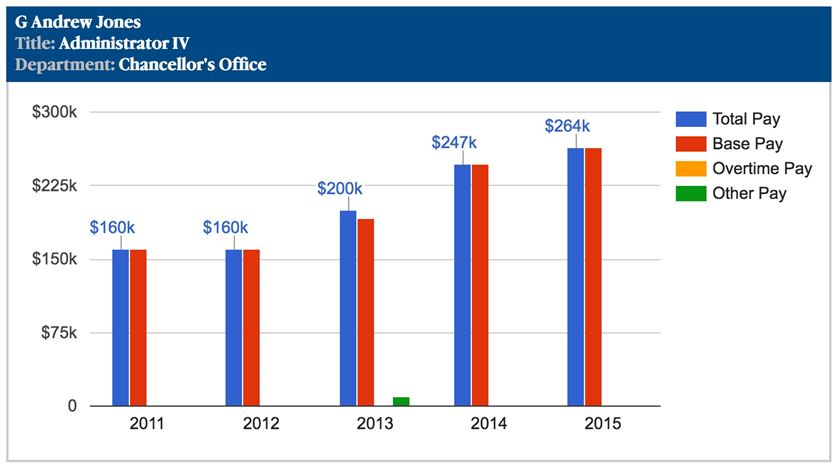 So has the chancellor’s chief of staff and senior advisor, Lars Walton: 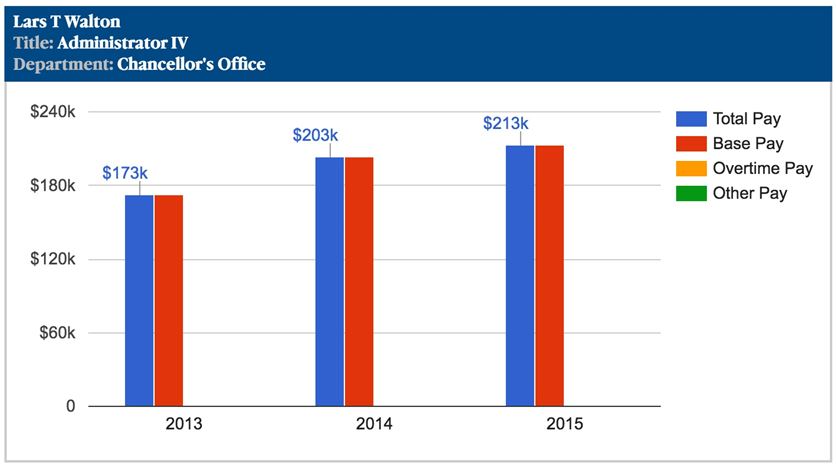 The same applies when you go further down the administrative ladder. For example, George H. Mansoor, who seems to work for the Common Management System Help Desk: 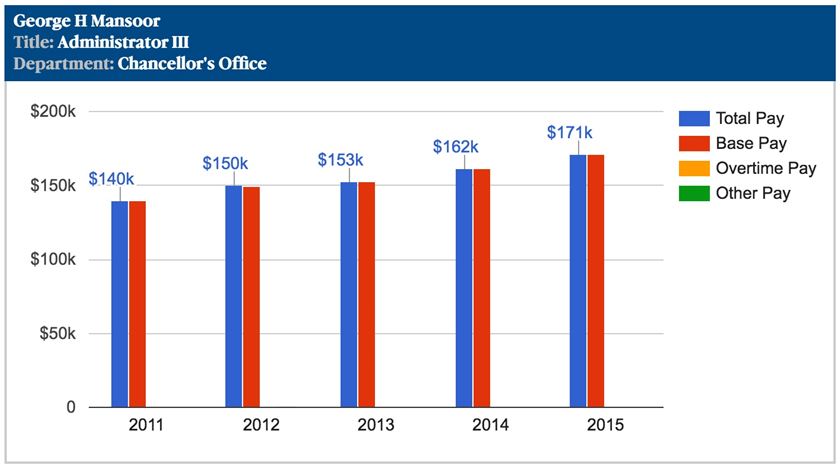 Not princely, but still better than how faculty salaries did during the same period.

Administrators at the various campuses also enjoyed annual raises at the same time that the faculty got nothing or next to nothing. David Dowell, for example, of CSU Long Beach: 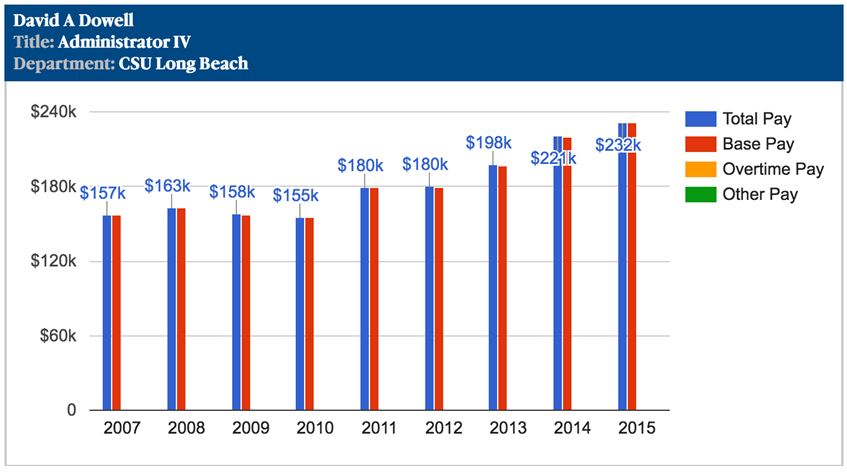 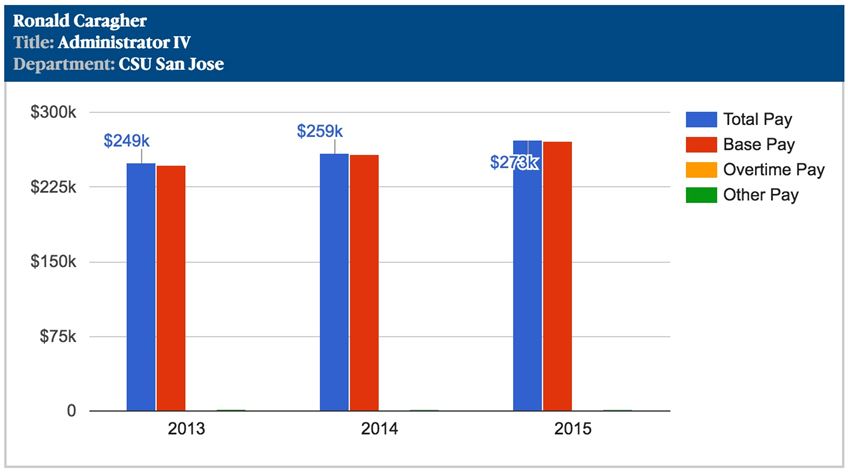 I’m not saying that these people (chosen, I admit, at random; you can go on to the database and find your own examples) do not deserve their raises. I’m sure they are all doing a bang-up job. But the gap between their yearly raises and the chancellor’s claim that he could not afford to do better by faculty should raise your blood pressure.

It’s hard not to think that the chancellor’s office skims what it wants off the top, making sure that executive compensation keeps going up while doing their level best to keep faculty salaries as low as possible.

Yes, the California Faculty Association won a major battle. But that’s just it: we had to threaten a strike to get the same sort of raises administrators get every year, and nobody is talking about where the money for these hard-won faculty raises will come from. I worry that faculty will pay for these raises in cancelled tenure-track hiring and larger class sizes. Wherever the funds come from, you can bet that the administrative compensation budget will remain off-limits as it continually spirals upward.

Peter C. Herman is a professor of English Literature at San Diego State University. He works on Shakespeare, Milton, and the literature of terrorism.

The Real Outrage at CSU Is Steady Raises for Administrators was last modified: April 25th, 2016 by Editor