The minimum wage is one of many issues in the news today that have a number of different angles that conservatives — both social and fiscal conservatives — do not usually consider. Liberals will usually cast the issue as one of greed; and conservatives will bristle…unless we step back a moment and consider a wider constellation of issues.

It is easy to point out that minimum wage jobs have never been intended to be “living wage” jobs. While my working life technically started as a 14-year-old paperboy for the old San Diego Union, my first “official” job (in the sense that I got a paycheck and a W-2 at the end of the year) was cleaning the lobby of the McDonald’s on Broadway and I Streets in Chula Vista. I got $3.35 per hour, then the minimum wage. This was never meant to be a wage that I could live on. It was meant to be an entry-level job at which I gained experience and showed I was reliable while still living at home and going to school. And it served me well exactly in that respect.

But there is something else going on here. Where adults are holding down these jobs, they often have more than one and often are part of a household where multiple people are contributing to the overall cost of living. And this was working — albeit perhaps in a difficult, “grind it out” sense. But it isn’t working out so well anymore.

Even though government statistics tell us inflation is low, ask these folks how far their minimum wage dollars go today in comparison to how far they used to go. President Obama recently took to Twitter to point out that milk has increased 17 percent and eggs 23 percent since 2009, but the federal minimum wage has remained the same. So which is it?  The 2 percent government statistic which excludes things like milk and eggs?  Or the real life our neighbors are struggling to live?

Where labor has this wrong is in pointing to the minimum wage. This is wrong for two reasons: the harder of these two to understand is that the problem is not wages, but the fact that those wages are paid in a currency that is worth less and less. The easier of these two problems can be understood by asking this question: If I can magically add a zero to your bank statement, that might make you feel better today. But if I do this in a way that will also add a zero to your grocery and utility bills, how have I helped you?  You are getting more dollars for each hour of work, but the everyday things you rely on are getting more and more expensive. When you add this to the first problem — the value of those dollars is going down — that hike in the minimum wage has left you no better off for having it.

I am not opposed to the minimum wage — as are many, and maybe even most, conservatives. I believe in the inherent dignity of the human person. And if the human person has inherent dignity, their labor must have inherent worth. The minimum wage is how we express our underlying conviction about the dignity of the human person. To suggest that labor is just another commodity to be traded in the economy is to embrace what ethicists call a “utilitarian” morality. The worth of a human being is measured by his or her utility to society.

We have seen this before: it was called eugenics.

Where the minimum wage goes wrong is when it is used to address income inequality. It goes wrong for a very simple reason: It does not work. It never has, and it never will, simply because it leaves unchanged the more fundamental problem of why our money is worth less and less. 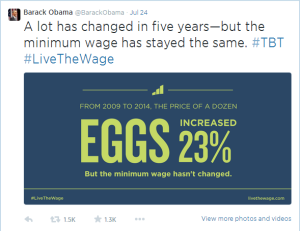 The problem is not with wages; it is with the money in which those wages are paid. The problem is allowing the banking sector to tell us what our money means. The Treasury holds gold in reserve on our behalf. Our money used to be tied to it; a dollar could be exchanged for a set amount of gold. That is money that means something; it is money that represents the wealth of the nation. In 1971 the dollar was taken off of this standard and both income inequality and the gross public debt have been rising ever since.

And with that debt now surpassing the ability of the Treasury to service it at interest rates otherwise set by a free market, the Federal Reserve has to step in to create new money in order to keep the government’s borrowing costs down. As each dollar is added to the money supply, the ones in your wallet are worth less and less. Or to put it another way, that minimum wage — in real terms of how much it will buy you —  is actually going down!  It is no wonder our neighbors are stirring for a minimum wage increase.

But again, to increase the minimum wage in dollars that represent the wealth of bank shareholders is to ensure that we — that is all of us — will never catch up as we watch our standard of living slip away. Our neighbors working minimum-wage jobs are just the first to feel the effects.

If organized labor and the Occupy Wall Street movement are truly interested in a just economic order where all enjoy an equal opportunity (not an equal outcome) to enjoy the creation of real wealth, they will join us conservatives in our call for a return to a sound dollar.

John Horst is the author of Community Conservatives and the Future and a board member of the Mira Mesa Town Council. He originally wrote a version of this column for his blog.

The Problem With Minimum Wage Is The Money Behind It was last modified: August 16th, 2014 by Editor