A new book examines the role of San Diego-based General Atomics in developing the Predator drone and launching a revolution in unmanned aircraft technology.

Predator: The Secret Origins of the Drone Revolution recounts the story of Israeli aircraft engineer Abraham “Abe” Karem’s early work on drones and the subsequent efforts by General Atomics to turn the idea into a practical, world-beating military technology. 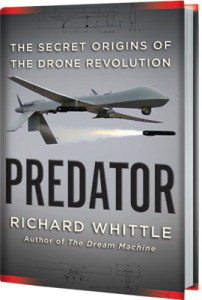 The first Predators were unlikely warplanes. “With its flimsy wings and skin, the craft resembled a weekend hobbyist’s glider and couldn’t fly much faster,” Whittle wrote.

The Pentagon now has some 360 Predator aircraft in operation, and thousands of other types of drones.

Whittle is a Global Fellow at the Woodrow Wilson International Center for Scholars and 2013-14 Alfred V. Verville Fellow at the National Air and Space Museum in Washington.