The guided-missile frigate USS McClusky is scheduled to depart its San Diego home port Thursday for an independent deployment to Central and South America. 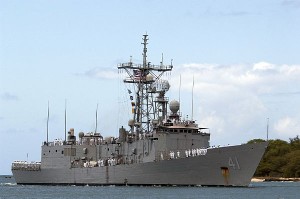 Navy officials said the vessel’s sailors and a Coast Guard detachment will conduct drug interdiction operations, in partnership with other nations.

“McClusky and her crew are ready and excited to deploy to the 4th Fleet area of operations,” said Cmdr. Ann McCann, the ship’s commanding officer. “This crew, along with Helicopter Sea Combat Squadron 23, Detachment 3, has trained hard and is ready to represent the United States Navy and execute counter illicit trafficking in concert with our regional and interagency partners.”

In a deployment two years ago, sailors aboard the McClusky seized 10,120 pounds of cocaine worth an estimated $174 million, according to the Navy.

The frigate is named after the late Rear Adm. Clarence Wade McClusky, who led successful dive bomber strikes on Japanese aircraft carriers in the Battle of Midway, which changed the course of World War II in the Pacific in June 1942.