The baby who became ill aboard her family’s sailboat about 925 miles off Cabo San Lucas was carried onto a Navy frigate early Sunday, and the baby and warship are likely arrive in their homeport of San Diego sometime Wednesday.

Coast Guard spokesman Petty Officer 2nd Class Barry Bena told CNS that the family was tentatively expected to arrive in San Diego sometime Wednesday. But he said it was not yet known if the civilian patient would come ashore after the USS Vandegrift docks, or whether she and her family would be airlifted to shore first. 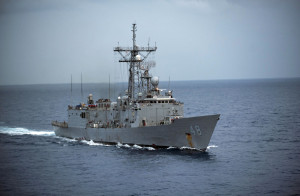 The rescue mission was initiated Thursday after the family had spent about two weeks at sea. Lyra Kaufman, 1, got an infection that required treatment beyond the capabilities of the others on board, which included parents Eric and Charlotte Kaufman and 3-year-old sister, Cora, according to 2nd Lt. Roderick B. Bersamina, spokesman for Air National Guard 129th Rescue Wing, and broadcast reports.

A Coast Guard flight surgeon recommended she be seen by medical personnel within two days. An Air National Guardsmen rescue team, and Navy and U.S. Coast Guard personnel were summoned to rescue the stricken girl, according to Bersamina and the Coast Guard.

Thursday evening, a team of Air National Guard rescuers parachuted into the ocean to board the Rebel Heart. They remained with the family until the San Diego-based USS Vandegrift arrived about 1 a.m. and brought the girl, her family and the rescue team aboard the warship about 8 a.m.

Coast Guard officials said the girl and her family had stable life signs. Sailors aboard the USS Vandegrift will medically evaluate the family and the frigate will head to San Diego.

U-T San Diego reported that the yacht was at first pointed towards Mexico on auto-steering and wind power, but after it began to take on water, it was sunk.