Volunteers were out early Friday canvassing the streets, canyons and riverbanks as part of San Diego County’s annual homeless count. But one stat is already known: The number of homeless people dying in the county increased significantly in 2017, according to the Medical Examiner’s Office.

Last year, the office recorded 126 homeless deaths — up 17 percent over the 108 who died the previous year. And over the past five years, the number of deaths has increased 91 percent. That far outpaces the growth of the county’s overall homeless population, which increased 3 percent over the same period.

That doesn’t surprise Bob McElroy, CEO of the nonprofit Alpha Project, which works with San Diego’s homeless. Every day he said he sees homeless people with untreated injuries and medical conditions.

“Next thing you know, the police department is bringing me a picture. The person I talked to yesterday is now dead in an alley somewhere,” McElroy said.

San Diego’s lack of housing and facilities for the homeless captured national attention last year when a hepatitis A epidemic led to the deaths of 14 homeless people. And those deaths aren’t even included in the medical examiner’s tally for 2017.

The office doesn’t investigate all of the homeless deaths — only those who died prematurely or on the streets without medical care. 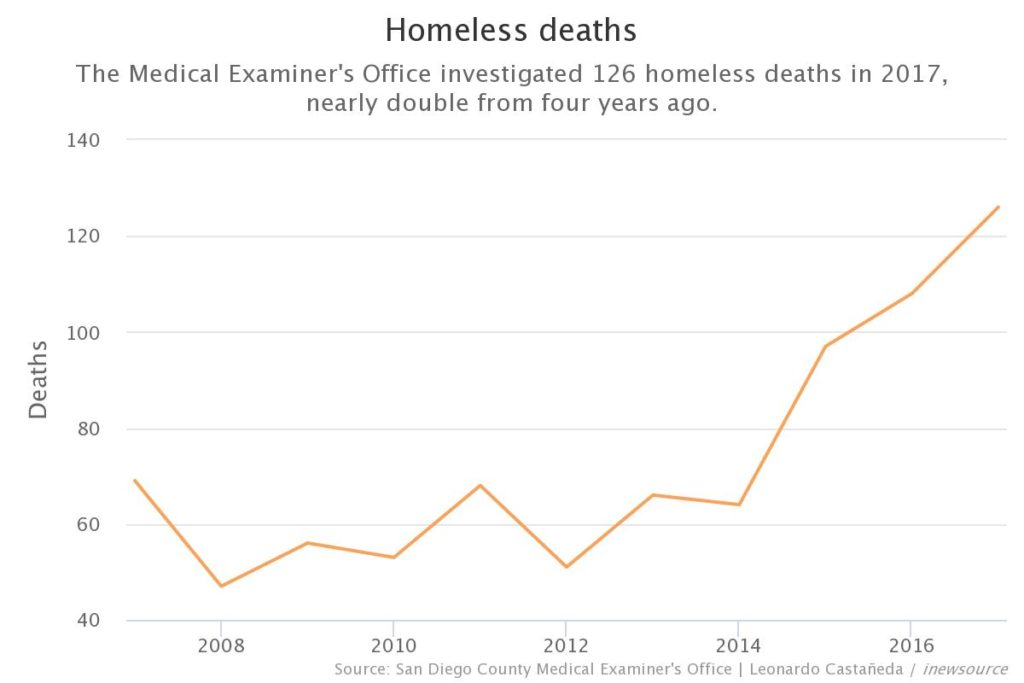 Causes behind the deaths

The No. 1 cause for homeless deaths in 2017 was drug overdoses, accounting for 35 deaths, according to the Medical Examiner’s Office. It was the second year in a row where overdoses were the leading cause.

Overdoses also increased 25 percent in 2017 over the previous year. Deputy Medical Examiner Steven Campman said methamphetamine and opioid use are behind the uptick.

“Blunt force injuries in accidental deaths, it’s usually from a motor vehicle accident,” Campman said. Injury deaths also include falls or being struck by a train, he said.

But the harder homeless deaths to account for are the people who get sick because they lack access to health care. Many of the deaths investigated by the medical examiner are connected to specific diseases such diabetes and heart issues, but it’s not always clear if they were receiving medical care.

McElroy with the Alpha Project said his organization is working to try to curb those kinds of deaths by finding shelter for those who are sick and giving them rides to medical appointments.

“You know, people are in survival mode out there,” he said. “They just don’t have access to the medical care they do when they’re inside, as opposed to outside.”

McElroy said even treatable conditions such as diabetes can become deadly for homeless people who don’t have access to a refrigerator where they can store their insulin. Another challenge is with people who have pneumonia or bronchitis.

“We have many, many people out here walking around with different stages of pneumonia, and a lot of people just trying to tough it out,” McElroy said. “Many times by the time they do get to the hospital, it’s too late.”

Darlene Carmack said she knows first hand the value of a shelter when battling illness. The 70-year-old resident of the Alpha Project’s East Village shelter is being treated for bronchitis.

“This wonderful place gets us back and forth to the emergency ward and brings us back home,” Carmack said. “Otherwise we’d all be pushing up daisies.”