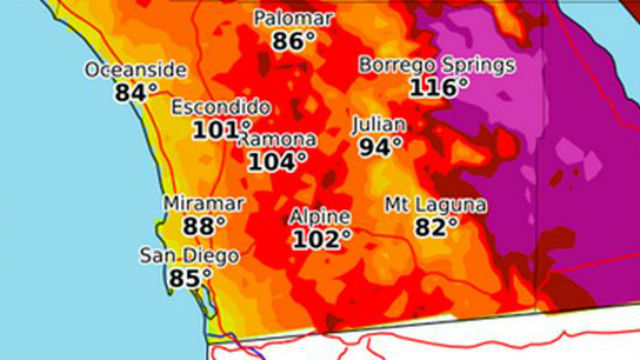 Triple-digit temperatures are expected in parts of San Diego County Friday, as is potentially record-breaking heat this weekend as a heat wave continues to bear down on the region.

A National Weather Service excessive heat warning for the deserts is set to take effect at 1 p.m. A less severe heat advisory for the mountains and valleys will begin at the same time. Both are scheduled to expire at 9 p.m. Monday.

“Strong high pressure will build over Southern California this weekend creating very hot weather for most inland locations,” according to the weather service. “Saturday and Sunday will be the hottest days with temperatures about 10 degrees above normal.” The NWS and county health officials are reminding residents to take precautions against dehydration, heat stroke and other heat-related illnesses.

Seniors, kids and pets lacking adequate shelter are most susceptible. Authorities also warned against ever leaving children, senior citizens or pets in parked cars, which can quickly become death traps in high heat.

Those working in hot zones were advised to reschedule strenuous activities, when possible; wear lightweight and loose-fitting clothing; drink plenty of water, but avoid sugary beverages; take frequent breaks in shaded or air conditioned areas; and watch for signs of heat exhaustion and heat stroke.

Anyone seeking a midday reprieve from the heat may visit any of the several cooling centers scattered throughout the county. The centers are generally libraries, senior centers and community centers that provide air- conditioned shelter while in operation, and are marked with a Polar Bear Cool Zone logo.

A full list of locations is available online at coolzones.org.