A dead hawk in Spring Valley tested positive for West Nile virus, the first such find in the San Diego region this year, the county Department of Environmental Health reported Monday. 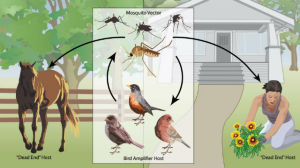 County officials said residents should take precautions against mosquitoes, which carry the disease.

“Everyone should remember to eliminate standing water inside and outside homes where mosquitoes could breed, wear clothing that covers arms and legs or use repellent if you’re outside dusk to dawn — and report dead birds and mosquito breeding areas,” said Elizabeth Pozzebon, the county’s DEH director.

Four out of five people bitten by a mosquito carrying WNV won’t have symptoms. Of those who do get sick, most will have a mild headache, fever, nausea, skin rash or swollen glands.

The symptoms turn life-threatening in one out of 150 cases, mainly for people over 50 or those with weakened immune systems.

Last year, 11 area residents were diagnosed with WNV, far more than usual, and two died, according to the DEH.

Rain water that might have collected in buckets, wheel barrows, plant saucers, rain gutters or other locations in yards should be dumped because the insects that carry the disease breed in standing water.

Window and door screens should be checked to make sure they’re in good condition and secured.

Also, people should report swimming pools in vacated homes that have turned green, and dead birds that didn’t obviously die from another cause, to (858) 694-2888 or vector@sdcounty.ca.gov.