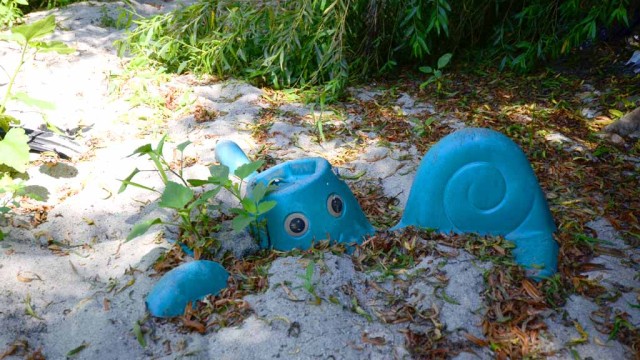 A discarded backyard toy finds a temporary home in the Tijuana River basin.The Environmental Health Coalition and youth from communities neighboring the Arroyo Alamar in Tijuana unveiled a comic book Monday to foster awareness about how to better conserve the river.

A youth group belonging to Tijuana’s Colectivo Chilpancingo Pro Justicia Ambiental created “Mi Comunidad y el Alamar, un rio binacional y una comunidad fronteriza,” or “My Community and the Alamar, a Binational River and a Border Community,” to increase awareness of how important Earth’s ecosystems are and how to take better care of them.

The comic book includes information about the Alamar’s flora and fauna and the Alamar Sustenable campaign to prevent destruction of the Alamar forest.

“We want the people who live in Tijuana and San Diego to know that this river’s forest helps to clean the air and the water that ultimately reaches the Tijuana River Estuary in San Diego,” said Dolores Casillas, a member of the Colectivo Chilpancingo Pro Justicia Ambiental. “We want them to know that we are connected and that the Alamar is not only important for us who live here, but for all the people of the region.”

The book’s launch was accompanied by a tour of the Alamar, guided by Jorge Calderon of the Red de Ciudadanos por la Mejora de las Comunidades, or Citizens Network for the Improvement of Communities. The tour showcased characteristics of the Alamar area, like poplar and willow trees.

“We want many people to read this comic so that they know how important the Alamar is and that they want to come and get to know and enjoy it,” said Monica de la Lanza, a member of the youth group.