The vaccination rate for California kindergartners went down slightly last school year, including in San Diego County, after hitting a record high the previous year.

One reason for the decline: Medical exemptions are increasing. Statewide, the rate of students with medical exemptions more than tripled since the 2015-16 school year. The rate in San Diego County increased sixfold.

Although medical exemptions represented a small portion of the overall student population last school year — less than 1 percent in California and slightly more than 1 percent in San Diego County — the increase has some concerned.

Dr. Dean Sidelinger, the county’s child health medical officer, said the number of children who need medical exemptions should be small, so he questions what’s behind the increase. 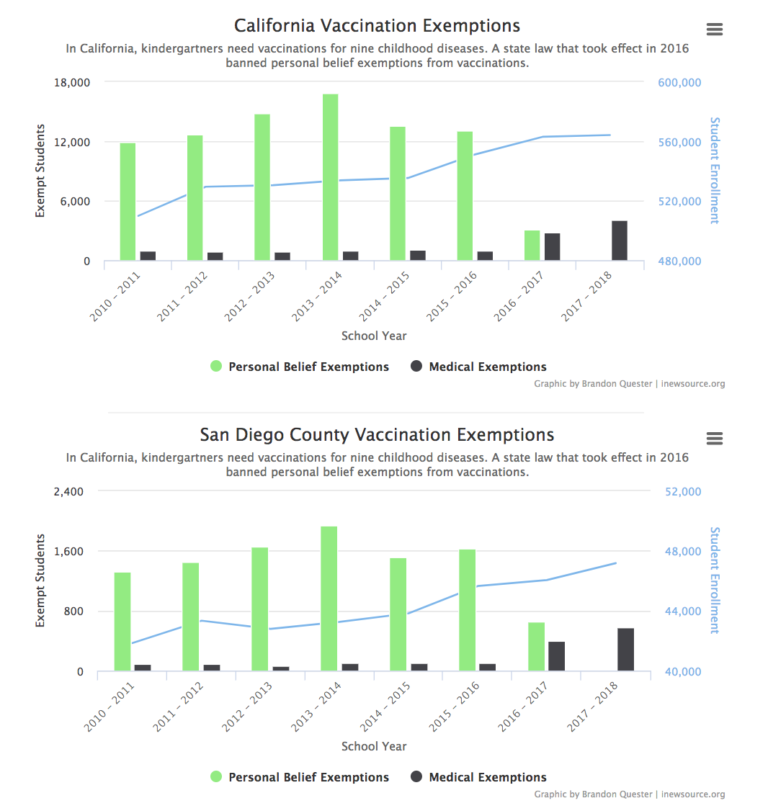 To start school, kindergartners need vaccinations for diphtheria, tetanus, whooping cough, polio, hepatitis B, measles, mumps, rubella and chickenpox. Parents can get medical exemptions for their children if they have had allergic reactions to vaccines in the past or other health conditions.

The state doesn’t specify what qualifies for a medical exemption from vaccinations. Doctors make those determinations.

A spokeswoman for state Sen. Richard Pan, D-Sacramento, said he may propose legislation that would change rules for medical exemptions if the upward trend continues. Pan, a physician, authored the 2015 law that banned personal belief exemptions. It’s considered one of the strictest in the nation and prohibits parents from citing religious or other non-medical objections to avoid vaccinating their children.

The senator’s 2015 legislation was prompted by a measles outbreak that infected more than 100 Californians and was traced to an unvaccinated 11-year-old visiting Disneyland.

Sidelinger said although vaccination rates dipped slightly last school year, they remain higher than when personal belief exemptions were allowed, and that is a positive.

The state rate was 95.1 percent, down half of a percentage point from the previous year, while San Diego County’s rate of 93.2 percent was down more than 1 percentage point.

But if the decline continues, Sidelinger said that could become a problem.

“If it looks like it’s a pattern, we’ll have to redouble our efforts in getting the word out, providing education and making sure that people are receiving the vaccines that they should,” he said.

The five schools in San Diego County with the lowest vaccination rates were all charters: Valiant Academy of Southern California, Inspire Charter School South, Pathways Academy Charter, Learning Latitudes Charter and Compass Charter Schools of San Diego. More than 70 percent of the kindergartners in those schools were missing one or more of the required vaccines.

The California Charter Schools Association has no specific stance on vaccinations but wants parents “to follow the law,” said Michelle Anderson, the association’s regional manager in San Diego and Orange County.

One way parents can avoid vaccinating their children is by homeschooling them or enrolling them in independent study programs that have no classroom instructions. The number of these exemptions in the county also is on the rise. 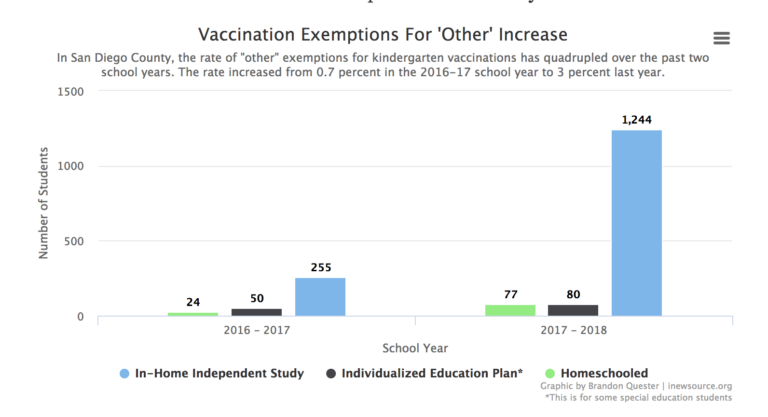 The purpose of vaccination requirements is to protect students in classrooms interacting with each other frequently, Sidelinger said. But he is a pediatrician and said he would like to see that protection for all children.

“I would love to see all kids get vaccines, even if they’re homeschooled,” he said.

For the current school year, vaccination data must be reported to the state by Nov. 1. The results will be available next year.