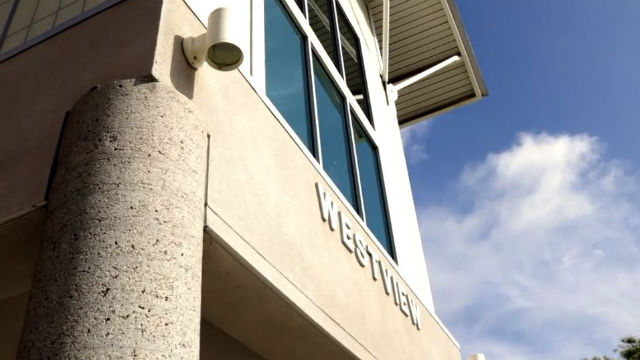 Westview High School. Image from school videoA West Hills High School freshman is facing a charge of issuing a criminal threat for allegedly insinuating online that a shooting was going to occur at the Santee campus, authorities reported Wednesday.

The 14-year-old, whose name was withheld because he is a minor, was arrested Tuesday on suspicion of posting a likeness of an AR-15-style rifle made out of Lego bricks on Instagram, along with a caption reading, “Don’t come to school tomorrow,” according to sheriff’s officials.

“Another student asked the (boy) to take down the post due to its threatening implications, but he refused,” Lt. Chris Steffen said.

The assistant principal of the school alerted law enforcement to the situation about 10 p.m., reporting that “other students were in fear of (the suspect),” Steffen said.

Deputies who tracked down the alleged perpetrator in Lemon Grove spoke with his mother and stepfather and determining that the youth had access to hunting rifles, according to Steffen.

“The investigation is ongoing to determine if this student has access to other weapons,” the lieutenant said.

After being questioned, the teen was arrested and booked into juvenile hall.

The alleged threat came a day after a Westview High School student was arrested on suspicion of making similar menacing statements regarding gun violence that supposedly was going to occur this week at the campus in the Torrey Highlands neighborhood of San Diego.

That teen, whose name, age and gender were withheld, also allegedly warned classmates to stay home from school due to the purportedly planned violence. Several of students who heard the comments reported them to school officials, who called the police.

Last week, alleged threats against Torrey Pines High School led to the arrests of a 14-year-old freshman enrolled at the Del Mar Heights-area campus and a 16-year-old non-student.

The local incidents have played out amid a spate of direct and veiled threats — most of them seemingly unfounded — occurring nationwide in the aftermath of the gun massacre at Marjory Stoneman Douglas High School in Parkland, Florida.