Editor’s Note: Since publication, the California Student Aid Commission has updated the status of San Diego Christian College’s access to Cal Grants. It is eligible for the 2017-18 school year.

San Diego Christian College, a nearly 50-year-old nonprofit school in Santee, can’t account for more than $20 million in expenses that are supposed to be detailed on its public tax returns.

In the meantime, current and former students complain of inadequate facilities, former staff felt they were underpaid and a vendor claimed the school often fell behind on payments. Students who attend this religious-based college full time pay $30,000 a year in tuition.

The school’s chief financial officer, Steve Chaney, told inewsource in an interview he could not say what the $20 million – spent from fiscal 2012 to 2014 – paid for. He said records would be made available, but weeks later the school’s attorney said in an email that San Diego Christian College would not provide any documents.

“It’s a symptom of a problem. Nobody’s paying attention,” Marcus Owens, a former top administrator with the Internal Revenue Service said after examining the school’s financial records at inewsource’s request.

The college president and the board of trustees, which is ultimately responsible for the school’s finances, either did not respond to requests for interviews or referred inewsource to the school’s attorney, Tracy Warren. She wrote in emails that officials had no comment and that inewsource should “cease and desist” efforts to reach the board.

Money problems at the school have mounted over the past few years. The U.S. Department of Education issued San Diego Christian College a failing financial score for fiscal 2014 based on findings from an outside audit.

Chaney attributed the failing financial score to money lost while moving the school to a new campus and dismissed concerns from the accrediting agency.

“They’re supposed to come in and be concerned about everything,” he said, insisting students shouldn’t be worried. “This institution is on solid footings.”

Yet there are doubts about the school’s finances.

“It concerns me,” said David Oliveira, a senior and student athlete. “I’m about to graduate and I’m worried about my degree.”

Since he enrolled in 2014, Oliveira said he has seen his scholarship drop from covering 90 percent of his tuition to 80 percent. Another problem is increasingly “overloaded professors,” Oliveira said.

San Diego Christian College calls itself “one of the top” Christian colleges in Southern California.

The school was founded by three people — a creationist, a pastor and the author of the best-selling Left Behind series. San Diego Christian existed on church-owned land in El Cajon until 2014, when it moved to “establish its identity as an independent, faith-based liberal arts college.”

Documents from the school’s accrediting agency show the college lost $2.4 million in net assets that year because of unexpected relocation costs and poor record keeping. San Diego Christian College said in a 2015 report that those were “extraordinary issues” in an “isolated year.”

The new campus is five office buildings tucked behind a shopping center in Santee. Inside are classrooms, a library, a cafeteria, and a chapel where most full-time students are required to attend services every Monday and Wednesday morning or potentially pay a fine.

Despite more than doubling the number of student-athletes at the college over six years, the school has no sports facilities of its own. Students use a nearby park, the Boys and Girls Club, and facilities at neighboring community colleges.

Kaitlin Brooks, a former assistant professor of communication at San Diego Christian, said academic rigor was “put on the backburner” at the college in favor of the religious experience — one of the reasons she said she left in 2016.

Brooks, a San Diego Christian graduate, recalled being told by a superior that her job was to “protect students from the outside world, which to me does not resonate with how I see my job as a college professor.”

More pressing, she said, was the low pay that pushed her and other professors away. There are no tenured professors at San Diego Christian – all are on one-year contracts, according to the U.S. Department of Education. 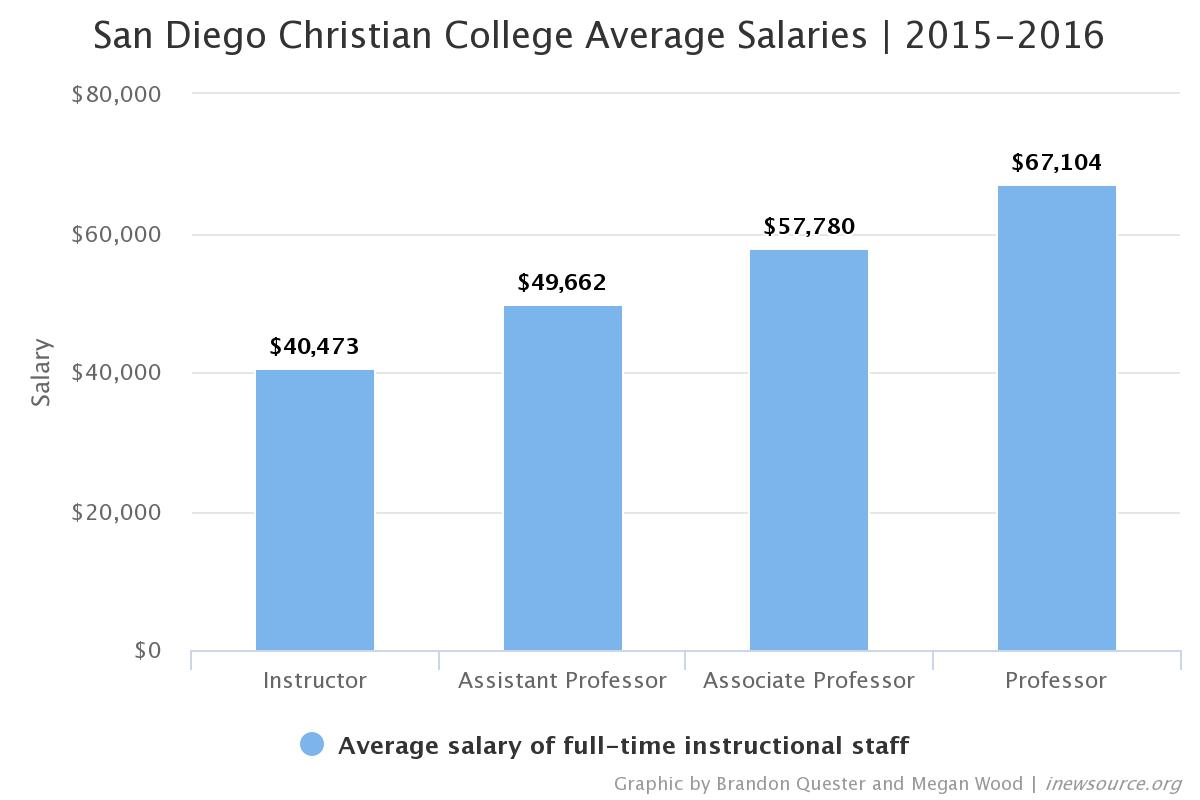 Brooks said she knows of more than a dozen other professors who left the school within the past year. “It seemed unusually high,” she said.

“I have a professor, she teaches me social media marketing and she teaches me entrepreneurship. And she teaches him another class,” said Oliveira, pointing to his teammate. He said it seemed like too much for one professor to teach three or more subjects a day.

“It makes it awkward for them and hard for them, and for us as well,” Oliveira said. “When you ask something it’s, ‘Oh, which class are you talking about?’”

Chaney, the CFO, said hiring more professors is not the school’s priority. Instead, the college is using software to expand, he said. The school has an online program that now offers bachelor’s degrees in six subjects and master’s degrees in two subjects. Eleven degrees are offered to traditional on-campus students.

“We can serve almost 2,000 students with the current staff we have,” Chaney said.

This year, San Diego Christian College became one of two private colleges in California ineligible to receive Cal Grants because of its low graduation rate in 2015 and 15.7 percent default rate (the percentage of students who don’t repay their federal loans) in 2013. Cal Grants are financial aid that qualified students do not have to repay.

Last year, at least 114 San Diego Christian College students received this state grant, and 90 percent of the school’s students had some type of financial aid.

Missing documents for ‘other expenses’

Chaney, whose accounting company is based in Roseville, works as a full-time officer of the college for no pay, according to the school’s tax returns.

The college pays his company, Chaney and Associates, an undisclosed amount to handle its accounts payable, payroll, tax preparation and more. According to tax documents, only five of the school’s contractors are paid more than $100,000. Chaney and Associates is not one of them.

Chaney’s relationship as a school officer and the owner of a company that does business with the college is not disclosed in the school’s yearly IRS returns, although that is required.

“The college saved a ton of money by outsourcing to me,” Chaney said, adding that the school previously paid four times the amount his company charges for the same services.

During fiscal 2012, 2013 and 2014, undocumented “other expenses” and “fees for services” at San Diego Christian College amounted to more than $20 million. The IRS requires documentation that explains those costs. None was attached.

Chaney told inewsource he would need to “refresh” his memory about the documents missing from the 2012 and 2013 returns. As for the 2014 documentation, he said a “system glitch” prevented its upload to the IRS. He contacted the IRS about the return, he said, but the IRS told him “don’t worry about amending it.”

When asked what documentation he had on this interaction – a tracking number, for example – Chaney said he hadn’t asked for any.

“That’s simply not what the IRS does in that sort of situation,” he said. “Normal procedure would be that the missing schedule would be solicited from the organization and associated with a return.”

The IRS declined to comment on the college’s finances.

inewsource sent three years of the school’s audited financials and tax forms to Owens, who is now a partner at the law firm Loeb & Loeb in Washington, D.C.

“It looks like the organization is really suffering from a lack of personnel,” he said, confirming the expenses needed to be detailed.

Owens also addressed the fact that Chaney works more than 500 miles away from the college, out of his office in Roseville.

“If they had a chief financial officer on campus, 40 hours a week, I suspect they would not have the sort of gaps and problems they’re facing,” Owens said. “Which are in the order of somebody doesn’t have the time to pay close attention to what’s going on.”

Two lawsuits were filed against the college by a food vendor and landlord in the past two years over missing payments. The total amount owed the two companies was more than $309,000, according to the lawsuits. Both cases were settled for undisclosed terms.

Chaney would not comment on the lawsuits, but said they were “minor.”

Taylor Maddox, a former co-owner of the school’s past food vendor, Philoxenia, catered the school’s cafeteria from 2014 to 2016. He said the college was perpetually $80,000 late in payments.

There were times when the company had to notify school staff that it could not serve food the next day without getting paid, Maddox said.

“Sometimes, the food quality would be lower and (students) would come to us and ask questions, because in their minds, they paid for their meal plan,” he said.

Colleges and universities that receive a score of 1.5 or higher from the U.S. Department of Education — based on a -1 to 3 scale — are considered financially responsible and and can receive federal financial aid without additional oversight.

Scores are based on a school’s cash reserves, net income and ability to borrow as reported in its audited financials.

In 2014, the college was given a score of 0.1 – which “pushed the College into the ‘fail’ zone”, according to its accrediting agency. That required the college to provide a $1.47 million letter of credit to secure federal student aid for the following year.

The college’s most recently released score was 1.1 in 2015. That’s considered financially responsible, according to the Education Department but requires cash monitoring. Records show the college was placed under this oversight from June 2016 to at least December 2016. 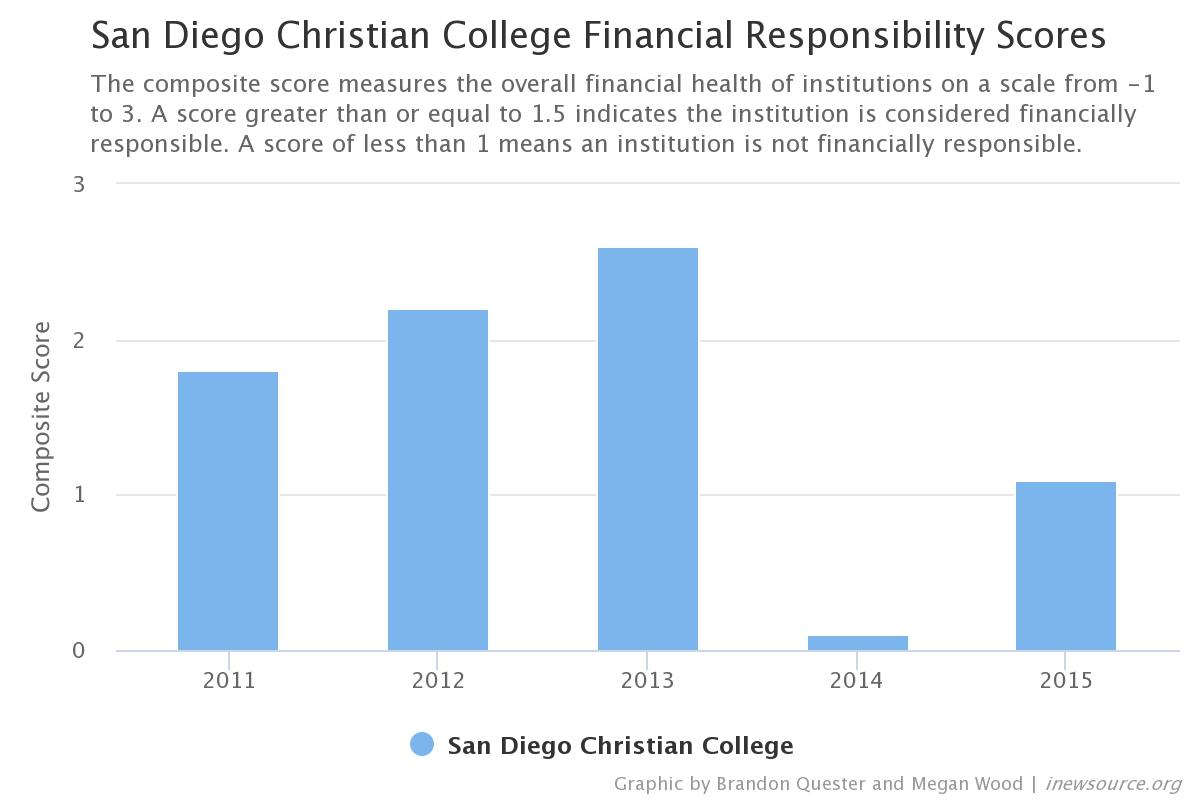 Chaney attributed the failing financial score to the school relocation and the distribution of too many college-funded scholarships.

The college’s financial aid department — managed by the vice president for student affairs — over-awarded student scholarships by $1.4 million in fiscal 2014, according to its latest reaccreditation report. That year, the school awarded $5.7 million in scholarships. The prior year, it awarded $4.3 million.

As a result, school officials hired new financial aid staff and shifted oversight of the department to Chaney. He said the fiscal 2016 financial score — which is not yet publicly available — will be reported at 1.6.

In 2019, the regional school accrediting agency will return to San Diego Christian College in a special visit to monitor what progress has been made since its reaccreditation in 2016.

School ‘has nothing to hide’ in audits

Before moving to its new campus, San Diego Christian College retained the same financial auditor for at least four years.

“Year after year, it was perfect, perfect, perfect,” Chaney said about the results of the audits. But for fiscal 2014 — the year it received its failing financial score — the college’s board hired a new “national” auditor to “scrutinize” the school’s finances, he said.

“That was our desire,” Chaney said. “We had nothing to hide.”

The audit found the school had two material weaknesses and nine significant deficiencies, noting federal aid recipients like San Diego Christian College are expected to have none.

The audit found a majority of the issues were due to the turnover in the college’s financial aid department and changes in administrative roles.

It also noted certain internal controls, such as payroll transactions and adjusting journal entries, were not reviewed. Several other deficiencies included students not receiving financial aid disbursements in the timeframe required by the Department of Education and not meeting federal reporting standards.

That audit was done by the Clifton Larson Allen accounting firm. It’s now done by Ken Mierzwinski, a certified public accountant who has done work for Chaney in the past.

Every audit since has found zero deficiencies.