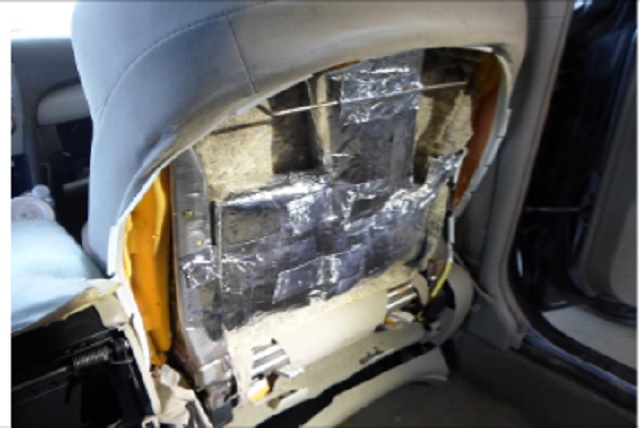 U.S. Border Patrol agents arrested a man who had a combined 46.7 pounds of cocaine and fentanyl in his car on Wednesday afternoon. Photo courtesy USBP.

U.S. Border Patrol agents arrested a man who had a combined 46.7 lbs. of cocaine and fentanyl in his car on Wednesday afternoon.

Around 1:30 p.m., an agent with his K9 partner initiated a vehicle stop on a 2007 Gray Toyota Camry on northbound interstate 15 in Escondido.

During the vehicle stop, the K9 team performed an exterior search of the sedan which resulted in an alert to the vehicle.  Pursuant to the alert, agents discovered aftermarket compartments inside the front and rear seats containing 18 foil wrapped packages.

The 18 foil wrapped packages contained 41.4 pounds of cocaine and 5.3 pounds of fentanyl. That is equal to 1,200,000 lethal doses of fentanyl. In total, the illegal narcotics have an estimated street value of $558,000.

The man, a 49-year-old Mexican citizen with a B1/B2 Visa, was taken into custody and later turned over to the Drug Enforcement Administration.  The vehicle was seized by the U.S. Border Patrol.

USBP Seizes Over Half a Million Dollars in Narcotics was last modified: March 6th, 2020 by Debbie L. Sklar