After a man held a knife to her throat, forced her into her car and repeatedly raped her, Helena Lazaro underwent a painful and humiliating medical forensic examination. The 17-year-old wanted her attacker caught.

She never imagined the evidence collected in what is known as a rape kit would sit untouched for years by the Los Angeles County Sheriff’s Department. And by the time she discovered the identity of her attacker, prosecutors couldn’t charge him with the rape because the statute of limitations had expired in California.

Victims’ rights groups estimate that hundreds of thousands of rape kits remain untested at police departments and crime lab storage facilities nationwide—thus far a partial inventory of California by the End the Backlog Initiative has identified some 9,000 untested kits. But the precise number remains a mystery because most states, including California, don’t inventory rape kits, and rape survivors sometimes struggle to get information about their own cases.

Law enforcement might opt not to submit kits for DNA and other analysis for any number of reasons—the case may be solved or cleared without need for test results, or officers may regard it as a low priority. But another reason so many kits gather dust is financial: Processing costs an estimated $500 to $1,500 per kit, sometimes more.

Legislative efforts to count and clear the rape kit backlog, to track the kits and to mandate all new kits be tested have failed over the years in California, with the powerful law enforcement lobby citing the burden on local police budgets and labor. This year appears to be no different. Some legislation that would reform rape kit collection has been watered down. Other bills await approval from lawmakers charged with weeding through bills that carry a price tag, who often reject popular measures because of their cost.

The responsibility for submitting rape kits for testing largely falls to local police departments and county sheriff’s offices. But a growing number of states have gotten involved—reacting to public outcry and to evidence that testing rape kits puts serial rapists behind bars. In recent years, California has “encouraged” law enforcement submit kits within a certain timeframe and legalized a victims’ bill of rights. But unlike many other states, California has stopped short of mandating testing or even paying to calculate the depth of the backlog.

One legislator has even resorted to a novel approach to crime-solving: A bill that would ask California taxpayers to donate directly to the rape kit backlog fund when filing their state income tax returns.

“It takes significant resources and political will, getting leaders to engage in this problem and say it’s a priority and want to fix it,” said Ilse Knecht, director of policy and advocacy at the Joyful Heart Foundation, a national nonprofit that works on sexual assault.

Tracking these kits, Knecht argues, is one way the public can hold law enforcement accountable for failures to prioritize sexual assaults as violent crimes, blaming the victim or only testing rape kits if a stranger committed the assault. Those cultural, subjective circumstances are the reason she and other advocates believe every rape kit ought to be tested – to end the discretion, and some say discrimination, involved in rape kit testing.

“I think the injustice of this situation is obvious but bears some repeating,” Assemblyman David Chiu testified before a Senate committee in June. “When kits are untested, survivors do not get justice.”

Chiu, D-San Francisco, authored AB 41, which would require local law enforcement agencies to log, not test, all future rape kits into a California Department of Justice database. It’s a small step toward the eventual goal of testing all rape kits, but even so, simply tracking new kits has garnered the opposition of the California State Sheriffs’ Association, which argues the reporting requirement would divert limited resources from critical services.

“If agencies report this information, there will be a database about who has untested kits and why they are untested,” said Cory Salzillo, legislative director of the sheriffs’ association. “That doesn’t necessarily translate into convictions.”

Salzillo also challenges the premise that every rape kit should be tested, citing cases where a person who committed a rape admitted to it, both the victim and the perpetrator agree a sexual encounter took place, or if a victim has recanted. But it’s hard to know what percentage of untested kits stem from solved cases in California because law enforcement isn’t required to report the information.

Lazaro still doesn’t know why the Los Angeles County Sheriff’s Department didn’t submit her test for analysis or why her case remained unsolved for so long. She spent her final year of high school terrified of her unknown attacker, who had threatened to kill her and her family if she ever reported the attack. When authorities did send Lazaro’s evidence kit for testing in 2003—seven years later—they didn’t tell her they had found a match. Her case never moved forward.

She didn’t learn the name of that match until 2009, after the sheriff’s department responded to an inquiry from a local rape crisis agency. Lazaro said she was told that the results had never made it from the lab to the sheriff’s department, and received an apology. But by then, California’s 10-year statute of limitations on rape had expired. (Last year Gov. Jerry Brown signed legislation that removes the statute of limitations on new sex crimes.)

Captain Carlos Marquez from Los Angeles County Sheriff’s Department declined to comment on the case, saying he was about to meet with Lazaro.

At first, Lazaro was relieved when she finally learned that the man authorities had identified through testing as her rapist—a long-haul truck driver from Ohio—was in prison for sexually assaulting his wife. She was safe. She believed her case had just slipped through the cracks. But then she learned about the hundreds of thousands of women nationwide whose rape kits have never been tested.

“I hate that I have to argue that it should be important enough to say ‘we need to prevent women from being raped,’” Lazaro said. “We track information about so many other crimes. Why is this an exception?”

Lawmakers on the Senate Appropriations Committee have put Chiu’s bill on the suspense file, meaning it has a cost to the state and will be heard later this summer. Similar bills have died twice before in appropriations committees.

A recent Senate analysis concluded that Chiu’s rape kit reporting bill presents a “potentially significant workload cost of more than $100,000 a year to local law enforcement agencies statewide,” although that cost would likely be reimbursed by the state. Related legislation that would ban the destruction of a rape kit in an unsolved case for 20 years could cost the state $3 million for a new storage facility, along with $150,000 in ongoing costs. That bill, AB 1312 by Democratic Assemblywoman Lorena Gonzalez Fletcher of San Diego, initially contained a provision that would have mandated the submission and testing of all newly collected rape kits. But that was it stripped from the bill because of its cost.

“Funding shouldn’t even be a question,” said Harriet Salarno, chair of Crime Victims United Charitable Foundation, whose daughter was murdered and has been working with victims for the last 37 years. “Public safety is a constitutional right. Public safety is a priority. They are using funding as an excuse.”

Critics say the cost of testing a rape kit is far outweighed by the cost of crimes prevented. In 2016, the Begun Center for Violence Prevention Research and Education at Case Western Reserve University in Ohio released a study that showed Cuyahoga County, Ohio, had saved $48.2 million by averting future sexual assaults after testing its 4,347 unsubmitted rape kits. A report by the U.S. Justice Department noted that Detroit alone had identified over 400 serial rapists through the testing of backlogged kits. 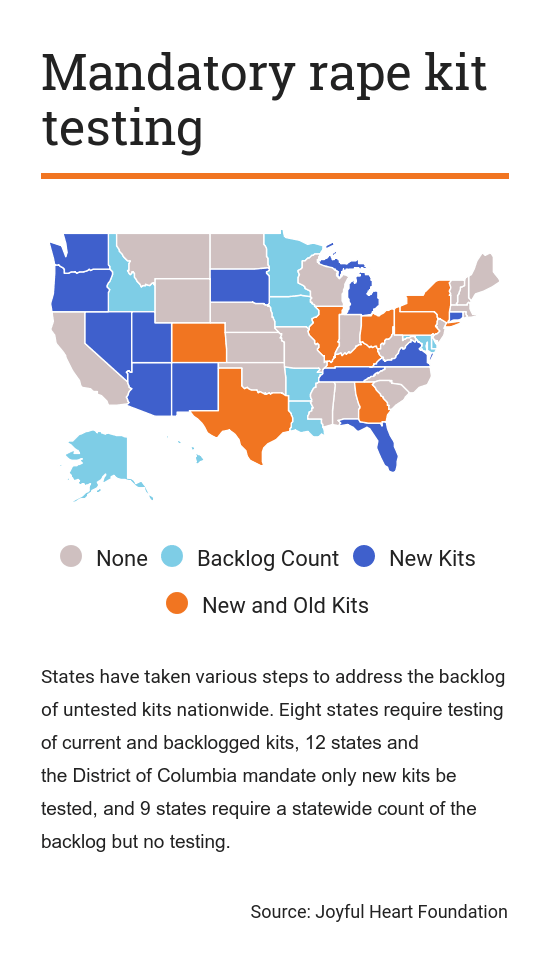 A growing number of states have taken steps to address the backlog. Arkansas, Iowa, Louisiana and Minnesota now require law enforcement to inventory untested rape kits. Connecticut, Illinois, Ohio and Michigan require all rape kits be tested within certain timeframes. California joins Kentucky, Oregon, Pennsylvania and Utah with laws that give survivors the right to know the status of their rape kit, according to the Joyful Heart Foundation, which runs a campaign called End The Backlog.

Congress has also stepped in. Since 2015, federal lawmakers have approved $131 million for the Sexual Assault Kit Initiative, and federal agencies have awarded millions in other grant dollars to help law enforcement and crime labs with their backlogs. The California Department of Justice, Orange County, the Riverside Police Department, the Alameda County District Attorney’s Office and the Contra Costa County District Attorney’s Office, have all benefited from funding, according to the Department of Justice.

Still, lawmakers have been reluctant to mandate law enforcement test all future rape kits, eliminate the backlog of untested rape kits or even do a statewide count to determine the backlog that exists.

Democratic Assemblyman Evan Low, from the Silicon Valley city of Campbell, said that’s why he put forward AB 280—to find an alternative way to raise funds to eliminate the rape kit backlog. His bill would add a check-off box to personal income tax forms that allows taxpayers to donate directly to the Rape Kit Backlog Voluntary Tax Contribution Fund. If approved by lawmakers and signed into law, California taxpayers would have to donate at least $250,000 a year for the box to stay on the form.

The idea, however, hasn’t been well received among advocates for sexual assault victims, who commend Low’s intent but argue the funding should come from law enforcement budgets.

“This is the criminal justice system. Laws have been broken and you can’t prosecute without criminal evidence,” says Patti Giggans, executive director of Peace Over Violence, who worked with Los Angeles area public officials after Human Rights Watch in 2009 revealed more than 12,500 untested rape kits in the county.

“I don’t know of any other crime where you go to the public,” she added.

Low is the first to admit that his bill is “not the ideal nor perfect solution” to address the backlog. “I am in agreement that we as a state and public jurisdictions should adequately fund this for justice to be obtained,” Low says. “But, that’s not the reality.”

Lazaro, whose attacker was never charged with her rape, wants lawmakers to think about survivors like herself when these bills come before them. She is still traumatized by what happened to her at the car wash just four blocks from her home in Downey. And she wonders how her life might have been different had law enforcement immediately submitted her rape kit for testing.

“It changed my life,” Lazaro said. “And I’m just now starting to come to terms with how much of my life was stolen.”